The order Hymenoptera (membrane wings) contains the ants, bees, wasps, horntails and sawflies. It famously includes those poster children for Social Insects, the ants, honeybees, and a few bumblebees, wasps and hornets. But the vast majority of Hymenopterans lead lives of solitude, and today’s wasp is one of them.

Toward the end of summer, the BugLady finds these lovely “stretch” wasps sipping nectar on goldenrods and other prairie wildflowers and doing a bit of pollinating on the side. They are Tiphiid wasps, Flower wasps in the (largely tropical) family Tiphiididae. The BugLady is guessing that this is the Five-banded tiphiid, Myzinum quinquecinctum. The genus Myzinum contains the largest and most conspicuous tiphiids, and although there are only a dozen or so species of tiphiids in North America, their identification can be an iffy thing. 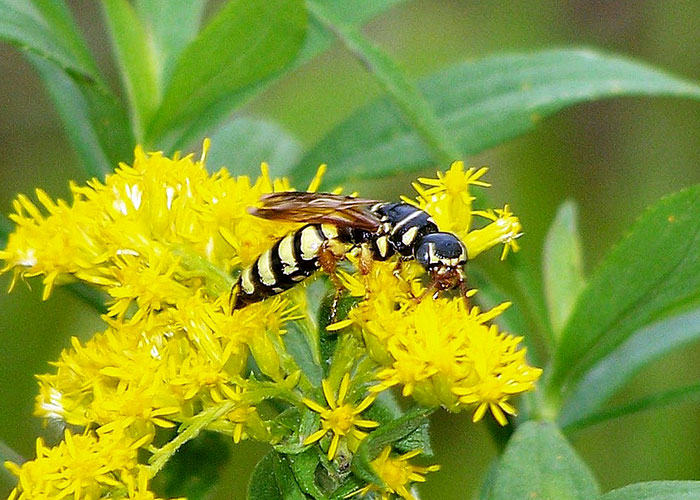 According to Eaton and Kaufman, in Field Guide to Insects of North America, some species of tiphiids have been imported to combat Japanese beetles (of previous BOTW fame) and other pest scarabs because, although the adults are vegetarians, their offspring are confirmed carnivores. Their larvae compete with the larvae of the American Pelecinid wasp, of recent BOTW fame, for the soil-dwelling grubs of scarab beetles like May/June beetles; whose grubs are considered pests because of their habit of gnawing on the roots of turf grass and other plants. The intrepid larvae of one group of tiphiid wasps prey on the grubs of tiger beetles, themselves voracious insect eaters.

The female doesn’t bring food to her egg; she brings her egg to food. When the female wasp locates a grub in the ground), she lays an egg on/near it. Some smaller tiphiids actually crawl underground to accomplish this, but the BugLady couldn’t find an account of these larger wasps doing that. The egg hatches and the wasp larva burrows into and then feeds on its grub, nibbling around its essential/life-support tissues so as not to kill its host until the home stretch, when the wasp larva is mature (a feeding method dubbed “parasitoid”). This all sounds like something the BugLady once saw in a Sci-Fi movie once. Winter is spent as a pupa in the soil and adults emerge in summer. 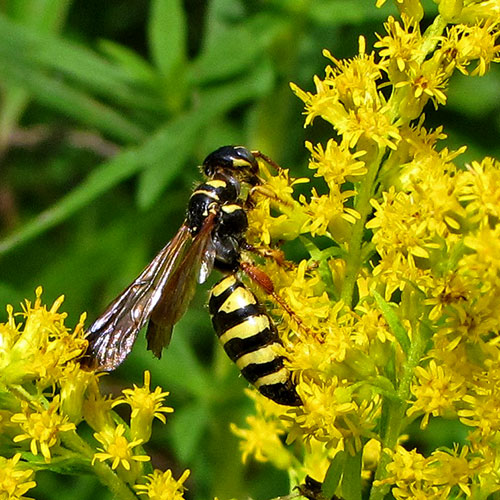 The underside and legs of this gal were decidedly bristly, and the femurs (comparable to our thighs) of her hind four legs had a distinctive swelling or bulge not found in other wasps the BugLady has photographed. The BugLady found a reference to male tiphiids in Florida swarming by the hundreds in a breeding frenzy, but she didn’t find anything about that behavior up here in God’s Country. Males and females look different. The males are smaller and slender and may fake out both people and potential predators with a false, hook-like “stinger.” Females may sport the real thing and have been known to sting when handled roughly. In general, tiphiids are solitary wasps that are no threat to humans, but, they undoubtedly benefit from looking like some of the seriously aggressive stinging wasps.