The BugLady recently issued a Bonus Bug episode on the Tiger Swallowtails that have been looping and spiraling across the landscape. Apparently, some of those greeting dances resulted in liaisons because lately, the BugLady has been finding their small fry on a variety of host plants.

As veteran BugFans will recall, Ms. Butterfly determines the identity of the host plants by rasping a leaf surface with rough places on the “soles of her feet” (tarsi) and then analyzing the “odor” with sensory organs on her tarsi or proboscis.

Caterpillars look like Happy Meals to a lot of predators, especially birds, shrews, raccoons and squirrels. Young Tigers, like their cousins the Giant swallowtails, are bird-poop-mimics. Tigers abandon that coloration and the pale ”saddle” mark about halfway through caterpillar-hood and go for a green-on-green defense (with counter-shading below and eye-like pigment spots above that give birds pause). Giants just keep getting more scat-like. Black swallowtails employ the Zebra Defense (disruptive coloration); their stripes, especially in the dappled sunlight, make it hard for a predator to discern their size and shape. 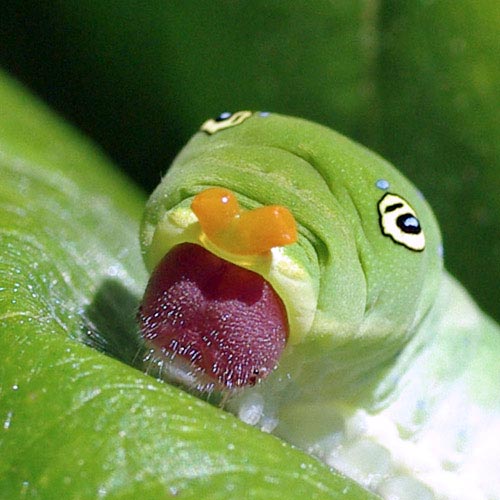 Swallowtail caterpillars also come equipped with a retractable, forked organ (osmeterium) on the first segment of their thorax. When they feel threatened, they pull their head in, (which gives them a big-headed look and displays the “eyes” on the tigers prominently) and pop out two “horns” that look like a snake’s tongue. They also practice chemical warfare—the osmeterium dispenses smelly chemicals called terpenes to discourage persistent or callow predators. 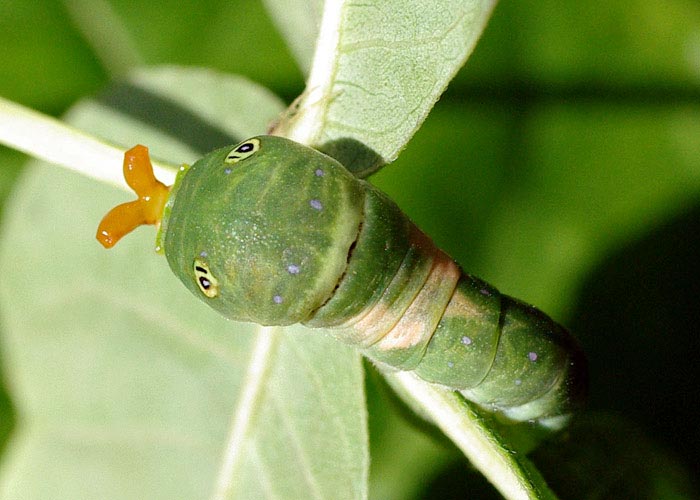 If you find a Tiger swallowtail caterpillar, it will probably be sitting on a network/pad/mat of silk threads in the middle of a leaf, facing upward. This is not the start of a cocoon (check out Bugguide for a picture of a tiger’s chrysalis. The caterpillar’s silk causes the leaf edges to pull together a bit into a “U-shape,” offering some shelter during feeding. Very young tigers are pretty sedentary, but older caterpillars will feed away from their silk pad and then return to it. Tigers will eat until they’re a bit longer than 2 inches long and then climb down the plant to pupate closer to the ground. The caterpillars of September will overwinter in their fragile-looking chrysalis.

A brief plant note. The books say that Giant swallowtail caterpillars feed only on members of the citrus family, and that Prickly Ash (Xanthoxylum americanum) is the northernmost representative of that family. A few years ago when the BugLady had Giant swallowtails breeding in her back yard, the caterpillars were chomping on prickly ash. Most of the tiger caterpillars shown here were photographed on a shrub called wafer ash/hop tree/stinking ash (Ptelea trifoliata), a shrub in the citrus family that has glossy compound leaves arranged in groups of three. It looks like a really happy poison ivy shrub. Wafer ash is a native to the U.S. that has been planted outside its original range; it is a species of “special concern” in Wisconsin because of its rarity. It is listed as a food plant for the Giant, but not for the Tiger swallowtail. A number of correspondents who sent pictures of Tiger caterpillars to bugguide.net remarked that they were feeding on wafer ash.

Cool Tiger Swallowtail fact: According to Wikipedia, a drawing of a Tiger Swallowtail rendered in 1587 by a gent named John White, during Sir Walter Raleigh’s third trip to Virginia, is the first known drawing of a North American butterfly. He labeled his drawing “Mamankanois,” which is apparently what the local Native Americans told him when he asked “What is this?” The BugLady gets a bit annoyed when Wikipedia (and other sources) says ‘Mamankanois’ which is believed to be the Native American word for “butterfly,” because there were hundreds of Native American languages and language families when Raleigh was walking the earth and probably as many words for butterfly—but that’s a different soap box.