The order Lepidoptera (“scaled wings”) is a large one, with almost 175,000 species globally. Overall, around 80% of Lepidopterans are moths; there are 20,000-plus species of Lepidoptera in North America, and only about 700 of those are butterflies. Today we consider three moths with international aspirations. Some of the information about them came from nature sites in the United Kingdom.

The BugLady photographed this Herald Moth (Scoliopteryx libatrix) on tip-toes (hers, not the moth’s) on a step stool at midnight in mid-August. What a pretty creature! Its name, Herald, is thought to refer to its fancy “ceremonial robes,” robes that also serve as camouflage when it is sitting on dry leaves. 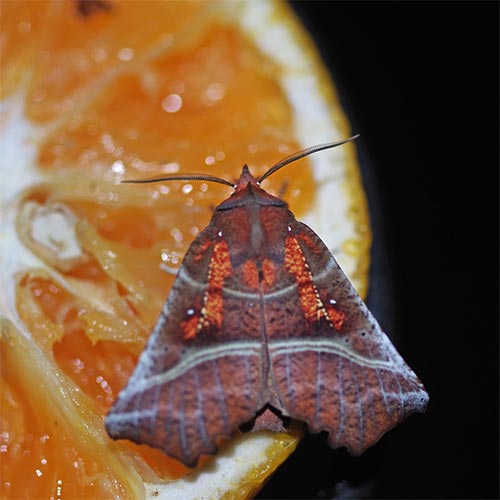 Its range is described as “Holarctic,” a term for the terrestrial ecozone that includes the northern continents around the globe (in other words—not Tropical); in North America, the Herald is more common north of the Mason-Dixon Line. Look for it in woodlands and edges near its caterpillar’s host plants, poplar and willow (or on oranges).

In the warmer parts of their range, Heralds can be seen flying quite late in fall and early in spring, but Heralds are unusual because they overwinter as adults in sheltered spots like barns, basements, and caves (cave dwellers are called trogloxenes). They lay eggs in spring, and their caterpillars eventually pupate in mid-summer in a minimalist cocoon formed between two leaves. Adults emerge in late summer or early fall.

They are in the moth family Erebidae, and like some other members of the family, the adults have hearing (tympanic) organs that allow them to detect the ultrasonic calls of the bats with whom they may co-habit in winter. Scientists tested the moths’ hearing equipment and are sure the Heralds can hear the bats, but apparently as a result of being bathed in bat calls during their stay in a cave, Heralds do not change behavior when bat signals are played. The theory is that they are acclimated to the calls, and to respond to each call would be expensive, energy-wise.

Like the Herald, the Green Pug Moth (Pasiphila rectangulata) (family Geometridae, the “earth measurers” or inch worms) is the only member of its genus in this neck of the woods. “This neck of the woods” includes the northeastern segment of the U.S., where it arrived in about 1970, and the Pacific Northwest, where it showed up a little later. It’s native to woodlands, gardens, parks and edges in the Palearctic regions of Europe and the Near East (Palearctic is the Holarctic minus the tundra). 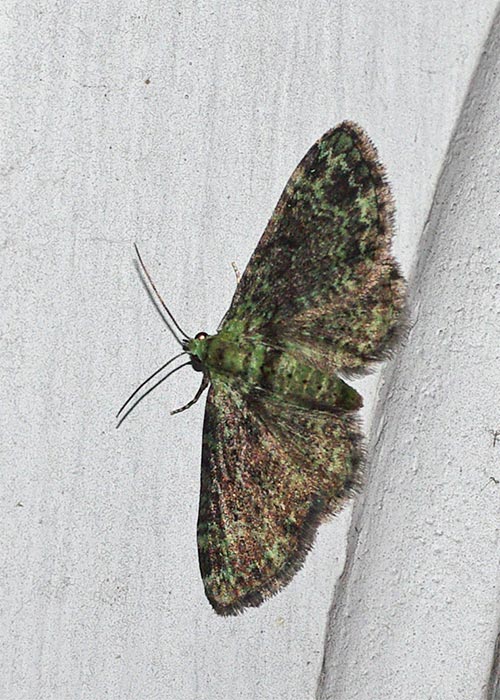 There a lot of variation in both the amount and lightness/darkness of green in GPMs—some forms are quite brown—and age may diminish its greenness. Cute as this little moth is, it’s not considered a welcome addition to American moth-fauna because in Europe, its larvae feed on the flowers, flower buds, and new leaves of fruit trees in the Rose family, like apples, pears and cherries. It is a potential pest when it is abundant, and sprayed trees fare better against it than un-sprayed.

GPM caterpillars hatch in April, as their host trees are starting to bloom, and they web flower parts or foliage together for shelter. They pupate under bark or soil and are in flight by the Summer Solstice. The GPM overwinters as an egg, and there is one generation a year.

The Copper Underwing (Amphipyra pyramidoides) isn’t one of the true Underwings with striped hind wings (though it is in the same family, Erebidae), but its uncommonly-seen hind wings harbor an orangey surprise (the BugLady thinks that her picture of the adult is correctly ID’d). Its species name, pyramidoides (sometimes pyramidea), is a nod to the peculiar shape of the caterpillar’s posterior, which accounts for the names “Humped Green Fruitworm” and “Pyramidal Green Fruitworm” (awesome caterpillar!). 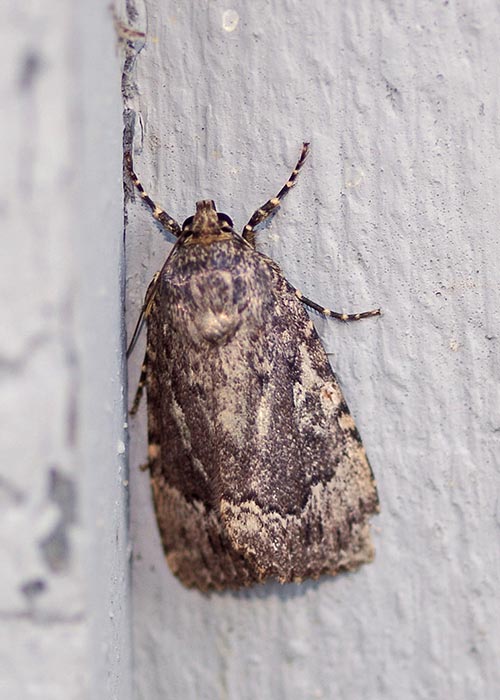 The CU occurs in deciduous woods across southern Canada, south to California, Texas, and Florida, though it’s not distributed uniformly throughout. It’s another Palearctic species that’s also found in parts of Europe and Asia. Adults fly in summer and early fall. Newly emerged adults are social, an odd behavior for moths, gathering in sheltered spots (like under loose bark), but they disperse when they are ready to reproduce. Eggs are laid through mid-fall, and CUs overwinter as eggs. 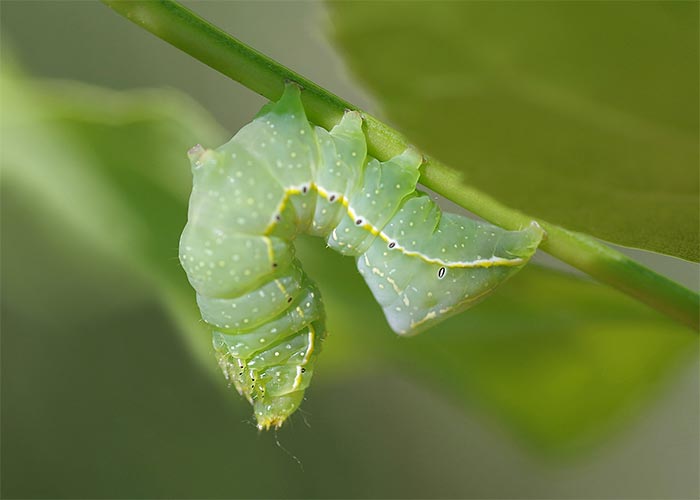 Fruitworm? In late spring, the caterpillars feed on the leaves of a variety of deciduous trees and shrubs like ash, willow, basswood, apple, grape, hawthorn, and raspberry (and, uncommonly, on the skins of growing fruits). They have a special fondness for oak leaves, but even with that menu, they are not considered pests. The caterpillars have devised a behavior to keep predators from discovering them. They nibble a bit of leaf, but instead of making conspicuous inroads on it, they move on and nibble another. Some predators notice a well-chewed leaf and look for the perpetrator.

Like the Herald moth, adult CUs have “ears” and can hear bats, but CUs stop flying and dive toward the ground when they hear one.