Sit back and put your feet up—this is a tale that takes a bit of telling. Also, it carries a Vocabulary Alert. We’re doing a little science here.

Despite the conspicuousness of ant hills and wasp nests and honeybee hives created by the social members of the order Hymenoptera, the majority of ants, bees and wasps (and sawflies and horntails) are solitary. It’s a huge order, with 130,000 species “on the books” and many other species waiting in the wings to be discovered and described. They’ve been around for more than 200 million years, appearing with the first dinosaurs and out-lasting them; social behavior developed a mere 144 to 65 million years ago.

Many members of the order have a “pinched” or “stalked” waist (petiole), but some members of the family Sphecidae, the Thread-waisted wasps (TwWs), carry that to extremes with a long, skinny “petiole” followed by a long, skinny abdomen. Their various common names, like sand wasp, digger wasp, mud wasp, hunting wasp, caterpillar-hunter, and cicada killer tell us where they hang out and what they do. Sphecids mostly nest in the ground or build free-standing nests from mud. Although the female is primarily a vegetarian that sips nectar from flowers as she hunts, she provides protein for her young (and she’s not above consuming some juices from the invertebrates she collects). 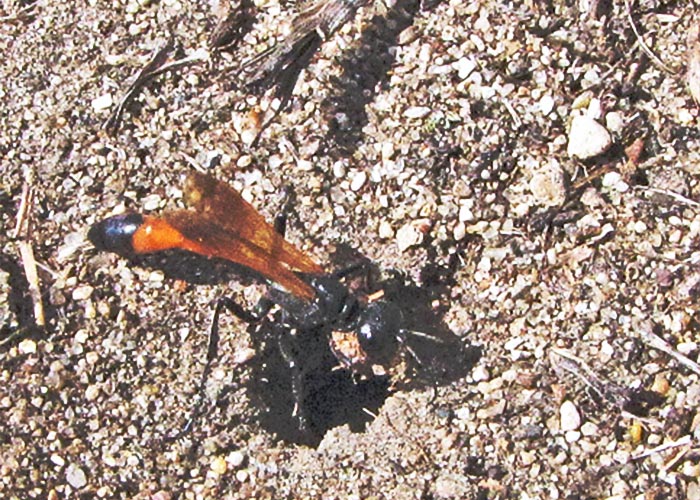 TwWs can be hard to identify with photos alone, but the BugLady thinks she has three species of wasps in two genera here, photographed in Wisconsin and New Jersey. They might be Ammophila pictipennis, Ammophila procera, and Eremnophila aureonotata.

Ammophila is Greek for sand lover. The first thing you discover when you Google Ammophila is that it’s the genus name both for some TwWs and for a few species of beach grasses, including one that is native to the Atlantic coast and the shores of the Great Lakes.

You can find Ammophila wasps everywhere that has grassland/garden flowers to nectar on and a suitable substrate for digging a nest hole in (i.e. everywhere but Antarctica). They average about an inch long and often have orange on their abdomens (females have more orange than males).

Using her mandibles as earth-movers, a female Ammophila digs an unbranched burrow for her eggs—but first, with her head pressed against the soil, she quivers her flight muscles. The resulting vibrations “drill” the dirt loose like a mini jack hammer, and a soft buzzing can be heard as she works. When the burrow is finished, she conceals its entrance and goes hunting.

Most Ammophilas target the caterpillars of moths and a few skipper butterflies and the larvae of their distant sawfly relatives. A large caterpillar “flying” through the air suspended by a much smaller wasp is a startling sight. Once home, she stuffs the paralyzed (but not dead) caterpillar into the burrow and lays an egg on it, thus providing her larva with a nutritious start in life. Then she refills the hole, compacting the dirt and concealing the disturbance by pressing on the soil with a small pebble that she holds in her jaws. Scholars debate about whether this tool-using behavior is instinctive, insightful, trial-and-error, or intelligent. Her larva will follow the M.O. of a typical parasitoid, eating its caterpillar slowly, keeping it alive by leaving the vital organs until last. It overwinters in its cell and emerges as an adult in spring.

When it’s time for a little shut-eye, Ammophila wasps grab a stem with their mandibles, fold their legs, and sleep, supported only by their strong jaws. They may roost overnight in groups.

Thread-waisted Wasp #1 may be Ammophila pictipennis (a TwW whose orange wings have black tips that get lighter as they age/wear). In Latin, pictus = painted and pennis = feather and may refer to the insect’s painted wing). It lives in the eastern half of the U.S., where it collects a lot of cutworm caterpillars for its young (think corn earworm). In one of the attached pictures of the wasp #1 near her tunnel, she has backed out of the tunnel holding a ball of soil between her front legs. For a nice article about this wasp by the co-author of the Kaufman Field Guide to Insects of North America. Check “Bug Eric from November 17, 2010. 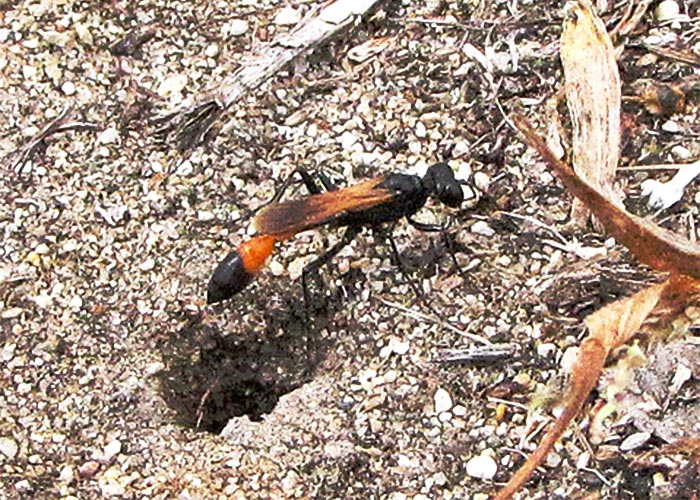 Thread-waisted Wasp #2< may be Ammophila procera (the TwW with silver racing stripes on its thorax). It’s found from southern Canada south to Guatemala and is sometimes (but not universally) called the Common TwW. It hunts caterpillars in the moth family Notodontidae, and, at one-and-a half inches long, is one of the larger Ammophilas. 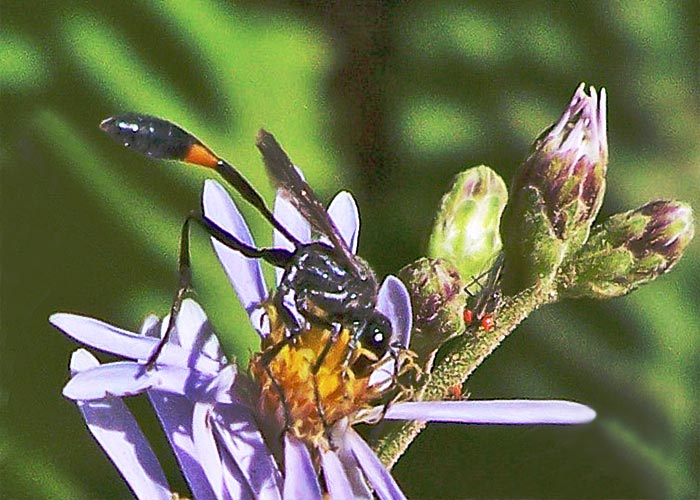 Thread-waisted Wasp #3 is Eremnophila aureonotata (metallic spots on the thorax, but no orange on the abdomen). Eremnophila means lover of solitary places or desert-lover (from the Greek eremos = solitary, and a ureonotata, referring to the gold/silvery marks on its thorax and face. This lovely inch-long wasp nectars and mates on flower clusters throughout Central America and the U.S., into southern Canada. It specializes in caterpillars of sphinx and owlet moths and of skipper butterflies. A female wasp may straddle an especially large caterpillar to walk it back to her nest. If you can’t get enough heroic shots of small wasps and large caterpillars, try http://bugguide.net/node/view/556060/bgimage and http://bugguide.net/node/view/322155/bgimage. 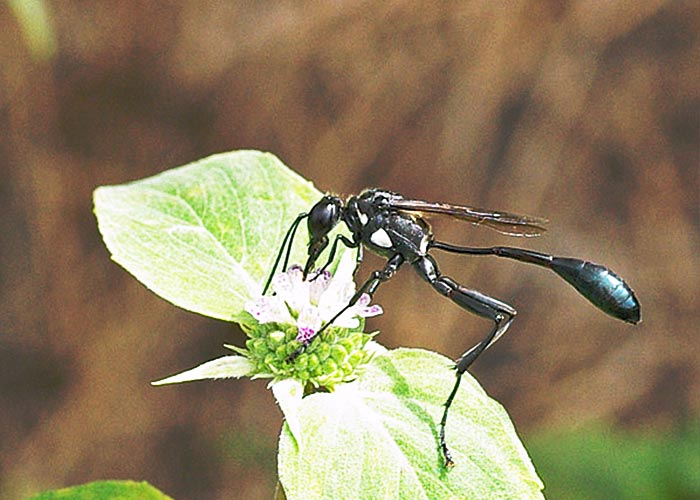 Complications enter the lives of TwWs in the form of a cuckoo wasp that stakes out the locations of excavating females, then darts in to lay its eggs while the TwW is laying hers (the cuckoo wasp’s larva will eat both the TwW larva and its food supply—a hyperparasite (a parasite of a parasite)). There’s also a flesh fly that follows Ammophila wasps home from a successful hunt and deposits her own live larvae at the tunnel’s entrance (the ability to pop out live young on demand is a rare trick in the insect world).

Here’s where the BugLady’s research happily took the bit in its mouth and ran away with her. But, as the great Yogi Berra once said, “When you come to a fork in the road, take it.”

The story gets science-fiction-y, here, and tender-hearted BugFans might want to avert their eyes (especially you, BugFan Patrick). It seems that TwWs are parasitized by a tiny (less than 1/8”), bizarre fly-like insect called a Strepsiptera (a Twisted-winged insect). The raspberry-eyed male Strepsipterans are winged and free-living; most females and all young are parasites. The biggest family in Strepsiptera is Stylopida, and they are the family that crosses paths with TwWs. A wasp parasitized by a Stylopid is said to be stylopized.

Female Stylopids live most of their lives under the edge of a TwW’s abdominal segment; they are wingless, legless, eyeless, and antenna-less insects that remain in their pupal skins as adults, their heads facing outward toward the wasp’s stinger/ovipositor. The female feeds on her host (often eating the host’s reproductive organs, resulting in “parasitic castration”) (the BugLady warned you). When it’s time to make little Stylopids, the male finds the embedded female via her pheromones and injects sperm into the opening of a brood chamber on her head (hypodermic insemination). 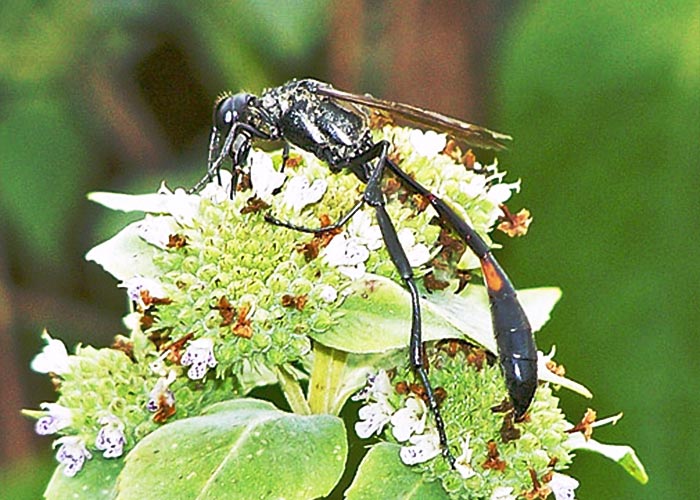 But how does a flightless female find her host in the first place? The larvae of a fertilized female begin their development, uniquely, within her circulatory system (one source says they consume her in the process). Thousands of very-active, first-stage larvae (triungulans) exit through the Stylopid’s brood opening onto the TwW’s surface, and when the TwW lands on a flower top, they disembark. They must find a host quickly—their active stage is brief—and so they quickly board other foraging wasps. Depending on the species of Stylopid, the larva may establish itself in its new host directly, using its “saliva” to soften an entrance hole in the host’s exoskeleton and then digging in, or it may hitch a ride (phoresy) back to a TwW nest. There it burrows into the TwW larva and feeds, but not lethally. Once established on its host, the parasite molts to become more typically maggot-like, remaining with the TwW larva as it metamorphoses into an adult, and the story begins again. If a female TwW inadvertently carries multiple triungulans back to her single-egg nest, her offspring may be parasitized by all of them (superparasitism).

Some entomologists believe that Strepsipterans should be classified with the flies, while others put them in with the beetles, positing that they are most closely related to the also-triungulan-producing blister beetles (of previous BOTW fame). Genome sequencing supports the beetle connection! Cutting edge science on BOTW, again.

Such a big story packed into such a tiny body.