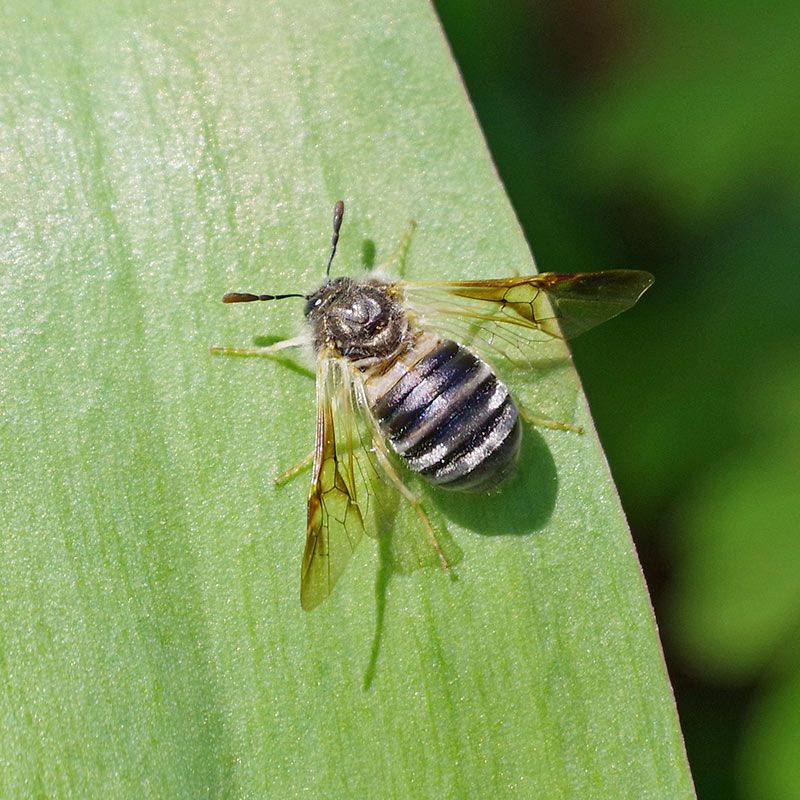 Sawflies appear infrequently in these pages, the most recently a year ago, in the person of the spectacular Elm sawfly. The sawflies that the BugLady typically sees (recognizes) are usually the wasp mimics that looks like this. About sawflies in general, much has been written, but the information often peters out as you zero in on species. A little taxonomy first: they are in the sawfly-horntail-wasp-bee-hornet-yellowjacket-ant order Hymenoptera. Sawflies are filed in a group called Symphyta, which is divided into 14 families and 8,000 species worldwide, and 1,245 species in 13 families in North America.

Sawflies are usually described as “primitive wasps,” but where a wasp has, well, a “wasp waist,” the connection between a sawfly’s thorax and abdomen is thick. The “saw” refers to the serrated ovipositor that the female uses to incise leaves or bark so she can lay her eggs (but she doesn’t sting with it).

Eggs are laid in groups called rafts or pods. They start out tucked inconspicuously inside a slit in a plant, but the egg grows along with the developing larva, and the eggs may bulge from their hiding places by the time they hatch.  In general, the larvae feed on leaves; often feeding in groups, and they have some very cool synchronized alarm displays. Sawflies tend to be very specific about the host plants for their eggs, and a number are agricultural/silvicultural/horticultural pests.  The sluggish adults feed on pollen and nectar, and sometimes at sap seeps.

Sawfly larvae are easily mistaken for moth or butterfly caterpillars. The secret handshake? Count the feet. Like the adults, larval Lepidoptera have three pairs of (real) legs on the thorax, and they also have two to five pairs of hook-tipped prolegs spaced along the abdomen that support and anchor it. Many sawfly larvae have prolegs, too, but those that do, have six or more pairs of them.

There’s usually only one generation a year, with immature sawflies spending the winter on the ground as a pre-pupa in a cocoon or as a pupa in a pupal case, finally finishing their development in spring or early summer. The adults live a week or so.  Some species are parthenogenic (meaning “virgin birth”), with females producing only female offspring, and no males in sight.

The Thick-clubbed sawfly (Abia inflata) is in the family Cimbicidae, a small family with about 12 species in four genera in North America and more elsewhere.  Cimbicids have noticeably clubbed antennae and tend to be bumble bee mimics.  Depending on the genus, the larvae feed (alone) on elm, cherry, or honeysuckle, and they often curl up on the undersides of leaves where they’re hard to spot or not hard at all.

Females deposit eggs, only one or two at a time, in honeysuckle leaf edges, and the larvae eat the tender parts of the leaves between the main veins. The speckled larvae may grow to 1¼” when mature. Here are some life stages. Note the cute little springtails by the curled up larva. Since they feed alone, they defend themselves by “reflex bleeding” rather than displays, oozing an offensive liquid from their joints that they sequester from chemicals in the leaves.

Abia inflata feeds on native honeysuckles, but grad student Loren Elizabeth Shewhart of Wright State University wondered if the species might be a potential biological control of the invasive Amur and other non-native honeysuckles that are taking over our landscapes. In a series of experiments in which she fed whole and damaged leaves of native and exotic honeysuckles to Abia inflata and three other sawfly species, she determined (among other things) that Abia inflata will eat exotics and will mature and even thrive in laboratory settings, but it’s seldom found on Amur honeysuckle in the field.

Why damaged leaves? Honeysuckle leaves that have been torn or chewed may produce more defensive chemicals than whole leaves; damaged leaves look “grazed” and give off aromatics, both of which attract predators and parasites.  Anyway, Shewhart speculates that Abia inflata simply doesn’t recognize the Amur honeysuckle as a potential host plant (yet), and this coupled with its preference for native species may cause natives to decline further as the exotics thrive in the absence of their natural grazers.

This is the big question in the control of any invasive plant—how long will it take for the native herbivores to figure out that all those new plants are a giant smorgasbord?

Thanks to Honorary BugFan PJ for identifying this sawfly. It does take a village.