The Wonders of Webs I – Spider Silk

The BugLady is a big fan of carnivores, and she admires spiders for their singlemindedness in that respect. She doesn’t know a lot about how they conduct their daily lives, and she knows even less about their taxonomy, but she can’t pass by a good spider web without checking it (next time, BugFan Mike). Webs are amazing structures, but spiders have about a half-dozen other uses for silk besides catching prey (and the silk itself is pretty amazing). Spider Webs is a huge topic, so this is, necessarily, an overview. 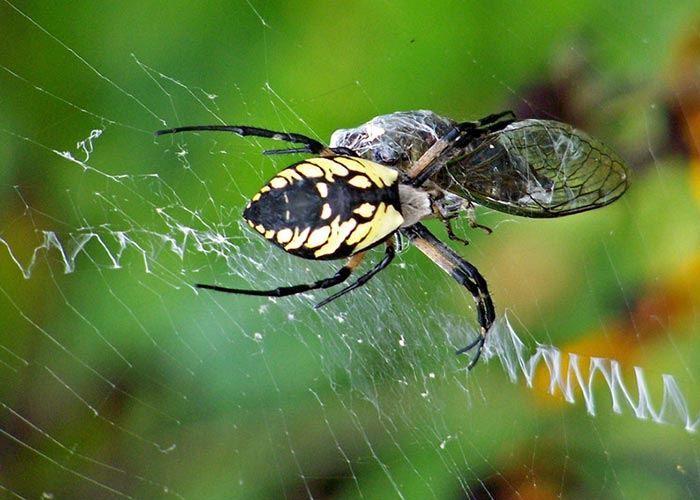 The Who, What, When, How, and Why of spider silk:

Who?  Everybody knows that spiders spin trap webs to catch their supper, but that’s a generalization, because not all spiders pursue their prey passively (from the edge of a web) and not all trap webs look like the classic disc spun by Charlotte. Most spiders can spin silk (yes, males do, too), even though they may not use it to make webs. Seven or eight kinds of silk have been cataloged, but the average spider doesn’t need or have the full array.

What? Spider silk/fiber is a long, complex molecule made of protein with a few other ingredients thrown in, like sugars, fats, and pigments. Silk is made up of protein, and each strand is also covered by a layer of protein. In the right environmental conditions, it’s stronger than steel, even at very cold or very hot temperatures, tougher than Kevlar, antimicrobial, flexible, almost as stretchy as rubber, durable, biodegradable, hypoallergenic, and, according to one source, so lightweight that a strand of silk long enough to circle the world would weigh about a pound.

When? Spiders hatch out of their eggs with the ability to produce silk and they do so all their lives. Spiders have been spinning trap webs for three or four million years.

How? Spiders carry a gel called “unspun silk dope” in their silk glands, and when the liquid is released, it travels through projections called spinnerets located on the underside of the abdomen’s tip and becomes solid when it hits the air. Spinnerets are the external extension of the silk glands; most spiders have between two and eight spinnerets, tipped by “spigots” that control the diameter of the emerging thread. They can release silk from several spinnerets at once to make a stronger strand. Spiders can grab the new silk with their legs and pull on it, and it looks like they’re pulling fully-formed silk from their body (humans have tried pulling on it, too—more about that later).

Why? Silk is not “one size fits all;” the various demands for silk have resulted in a variety of types of silk and a variety of kinds of silk glands to produce it. Silk is used:

Humans have uses for it, too. Medicinally, it been used as a styptic (it’s rich in Vitamin K) and as a bandage, and in contemporary medicine, silk is being tested as a stimulant for neuronal regeneration. Some Pacific Islanders make nets from webs of the big Nephila spiders, and web has been used to make crosshairs in telescopic rifle sights and in other optics, including microscopes. And for some highly technical applications that the BugLady doesn’t understand, like N-slit interferometric signals and inertial confinement fusion (astonishing that the optimal material for some 21st century technology is a fiber made by a spider).

And then there’s fabric. A while back, BugFan Diane sent this link to a story about spinning the silk of Madagascar Golden orb spiders into fabric, an intersection, she said, of bugs and fiber art. It took 82 people four years to extract silk from over a million Golden orb spiders (no spiders were harmed in making the fabric) and create the 4’ x 11’ piece of cloth. See two wonderful videos about its construction. Wow! Thanks, Diane!

Not surprisingly, humans are interested in growing some of this amazing substance, but (Spiderman notwithstanding) results have been mixed. Humans have manually pulled on the strands of spider silk to get a longer fiber and, along the way, have discovered that because spiders are carnivores, farming a whole slew of them in a big cage is a non-starter. And, the molecule has proven difficult to duplicate.

Which brings us to the brave new world of GMOs. After some tinkering in the lab, scientists have come up with silk moths, E. coli bacteria, and tobacco and potato plants that have been inoculated with spider DNA and have yielded decidedly mixed (and sometimes surprising) results. Two real-life applications that were mentioned are “spider” fiber for IPad covers and car seats. Most bizarre is a genetically modified goat that secretes silk fibers in its milk (the BugLady is not kidding). Fascinating article at http://www.wired.com/2015/06/bolt-threads-spider-silk/.

The BugLady is building an updated mailing list of BugFans because she suspects that some of you are no longer out there. If you are out there and want to continue to receive BOTW, please respond sometime in the next two weeks. Deadline is the 15th of March.

Bugs In The News