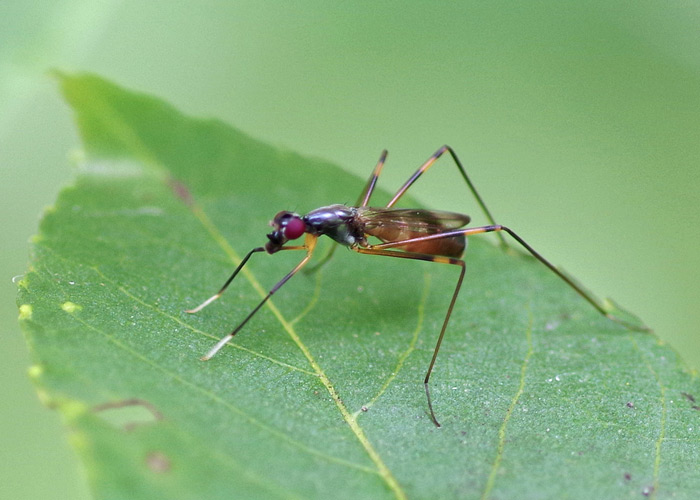 The BugLady had a “Stop the Presses” moment as she was writing this week’s BOTW. When she hiked down to the mailbox, she saw a fly that she had never seen before, from a family she’s never seen before, skating over the top of a leaf, and she bumped it to the head of the line. She photographed it badly, but here’s a good image.

In last week’s episode we considered a beetle that mimics a bumblebee; this is a fly that is imitating an ichneumon wasp (and no one messes with wasps), and some of its relatives are ant-mimics.

It’s a Stilt-legged fly/Small-footed fly in the family Micropezidae, a family with only about 30 species in North America and some 600 species worldwide (they’re a different bunch than the tiny, iridescent Long-legged flies in the family Dolichopodidae). Stilt-legged flies are most diverse in the tropics, where their larvae are dung-dwellers. They’re famous for raising their short, front pair of legs so that they look like antennae as the flies walk around; their actual antennae are pretty short. They live in damp and dappled wetlands and woods. Kaufman, in his Field Guide to Insects of North America tells us to look for them “crawling slowly about the base of trees, or on low foliage.” 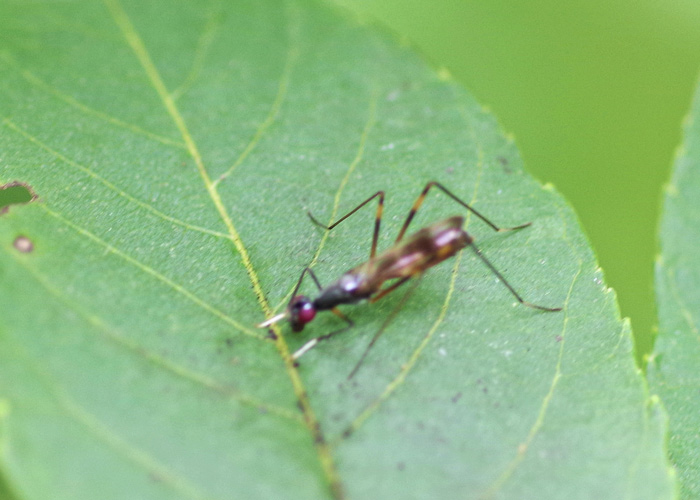 Micropezids feed on decaying organic matter or in plant roots as larvae (the larva of an Australian species lives in the water of a pitcher plant and eats decaying invertebrates that it finds there). Some adults are predaceous and others eat rotting fruits and droppings of birds or other animals. As a group, they fly below the radar, and there are a lot of gaps in our knowledge of their natural history.

This stilt-legged fly, Rainieria antennaepes (no common name), is the only Rainieria in North America. According to bugguide.net, antennaepes refers to the fly’s habit of passing off its legs as antennae. It’s found east of the Rockies and into southern Canada.

Sometimes, as it walked around, the fly would bow its head down toward the leaf surface, allowing it to suck up food with its forward-facing, “vacuum cleaner” mouthparts, which look like a tiny gas mask (see the last picture at https://sites.duke.edu/dukeinsects/insect-orders/diptera/taeniaptera-trivittata).

About its life history, the BugLady could find little – according to the website americaninsects.net, “Larvae often develop in decaying leaves or other rotting plant material. The pupa is made from the final larval skin, and so the pupa resembles the last larval instar.”

Even though parts of its life are a mystery, the BugLady found a number of videos featuring the adults. In the first, even though the BugLady has admired The Early Birder’s great insect shots, the “semaphore” he refers to looks like grooming behavior to her https://www.youtube.com/watch?v=Ba3inwK11Ys. Check out the video of a stilt-legged fly snacking on a bit of cheese here, and this, from another of the “Bug of the Week” series out there.