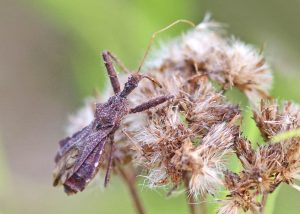 The Spined assassin bug is found across Canada, throughout the United States and into northern Mexico. It hangs out in sunny grasslands and agricultural fields, where it feeds on the adults, larvae/nymphs, and eggs of a wide variety of insects – crop pests and “good bugs” alike these. Phillip Readio, in Collected Papers, Vol 1 (1922) says that “It is probable that it will accept any small insect that is not particularly repulsive.”

It feeds in the time-honored bug fashion – puncturing its prey with its sharp “beak,” injecting saliva that softens its prey’s innards (“external digestion”), and then slurping out the liquefied tissue. It often waits vertically, head down, on flowers. Goldenrod is a common perch in fall, and the adult that the BugLady photographed on a seedy goldenrod in October was about three inches away from a sluggish red-legged grasshopper. 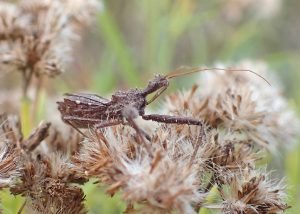 Spined assassin bugs are willing to take on insects that are larger than they are (which is a little more than a half-inch), and are considered valuable biological control agents. They are also reluctant cannibals – newly-hatched nymphs will attempt to feed on their siblings only after several days of starvation, but they seem to prefer other prey (possibly because their siblings will push back). 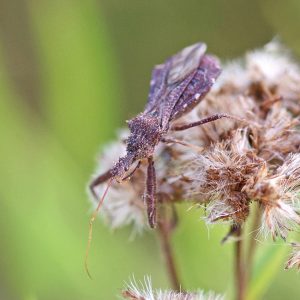 When two Spined assassin bugs face off against each other, posturing and feinting escalate, resulting in retreat by one of the combatants, and according to researcher Johnathan Schmidt, “the original resident on the perch retreated in 70% of the encounters.” He continues, “The combinations of posturing, striking, and stridulation (more about stridulation in a second) that occurred during encounters may have provided each bug with information concerning the identity and relative fitness of its opponent. If an individual is fit, it may be advantageous for it to probe the defensive capabilities of its opponent, since its own risk is low, and a less fit opponent could be killed and eaten.”

Seasoned BugFans know how happy the BugLady is when she comes across the elegant scientific prose of a century ago. In his article called “Notes on Sinea diadema,” (1923), George Barber tells us that

Eggs of this species may be readily obtained by confining the adults in salve boxes. They are deposited usually in small masses, the individual eggs upright and arranged in two rows. As thus seen under magnification they are very beautiful, the structures of the cap and the collar-like extension of the chorion, which extends outwards from the new laid egg, appearing like delicate lace.

In hatching, the insect tilts the cap [of the egg] off and emerges slowly, requiring about two minutes for the operation. The young insect appears to be folded once upon itself and the top of the thorax appears first.…… The legs, antennae, and beak are folded up together, and are extricated by repeated pulls, first on the hind legs, then the middle legs, then on the front legs and finally the antennae…… The cap of the egg frequently catches on one of the spines of the thorax and adds something to the already grotesque appearance…

Nymphs (check these from bugguide) get spinier as they get older. Barber again:

The first instar nymph is a most grotesque little insect with a very large head, powerful beak and large, strong front femora provided with numerous stout, sharp spines. The armature is admirably designed for a predatory habit, the head and thorax being covered with plates of very stout, smooth, black chitin against which, we are pleased to believe, a much larger insect might struggle without effect, once it is in the grasp of powerful front femora. Young nymphs that I confined wasted no time on covering themselves with litter and soon became all but indistinguishable. Here again the insect is found superbly fitted for its habit, for on the thorax it bears four sharp, stout spines, than which no structure, perhaps, would better serve for retaining the litter with which it covers itself.

The BugLady couldn’t find anything about Spined assassin bug courtship (but she’s reminded of the punchline of the old joke about porcupines – “Very carefully”). Here are two males vying for the favors of a female. 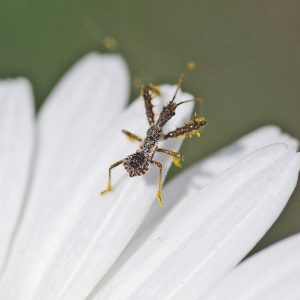 How do they find out what’s going on in their world? Scent (as registered by their antennae) is important for finding the right habitat, and sight helps them identify potential prey and dodge predators. They can also sense vibrations, and, like many of their family members, Spined assassin bugs can communicate with each other via stridulation (making noise by rubbing one body part against another) – in the case of Spined assassin bugs, drawing their beak back and forth through a ridged groove in the prosternum (the underside of the front edge of the thorax).

Stridulation is connected with courtship in the grasshoppers and crickets, but Spined assassin bugs seem to use it when they’re startled and for intimidation in intra-species confrontations. Males, females and nymphs can all make sound. According to Schmidt, “Stridulating individuals retreated more often than their nonstridulating opponents, indicating that stridulation may be a startle mechanism employed by temporarily disadvantaged individuals to escape from encounters.” Says Phillip Readio: “The writer agrees with Handlirsch that the sound is for the purpose of warning or frightening away enemies rather than for sexual attraction. The fact that nymphs are capable of making sound argues against the latter theory. It has been observed by the writer that sometimes in the preliminaries of copulation, and sometimes in the act of copulation, the female will stridulate. In this case, however, it seems to be a protest, and does not occur until she has been grasped by a male.” 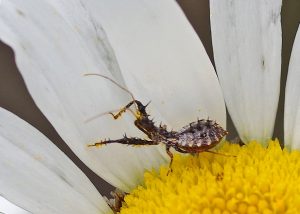 Finally, a “related search” that often pops up when the BugLady is researching an insect – “Spined assassin bug bite.” On this topic, the sources are split. Some describe the stab of a spined assassin bug’s beak as painful, memorable (though not deadly), causing temporary itching and swelling. Readio, on the other hand, notes that “The writer’s experience indicates that some species not only will not attack human beings, but cannot be made to bite by any amount of tormenting. Sinea diadema (Fabricius) has been handled freely, and not only handled but deliberately squeezed, and a finger, the back of the hand, and the soft skin between the fingers presented to it, but it has never bitten under such circumstances.”