If you thought these were bees, then their plan is working. True flies in the order Diptera, not bees, soldier flies are mimics who live out in the open by impersonating something that stings.

The soldier fly family (Stratiomyidae) is a large and diverse one with some 250 species in North America and more than 2,500 species globally. The BugLady became interested in soldier flies because their spindle-shaped larvae do the Dead Man’s Float on the surface of her favorite ephemeral ponds. About half the SF species have aquatic larvae, and this episode will concentrate on these aquatic types. 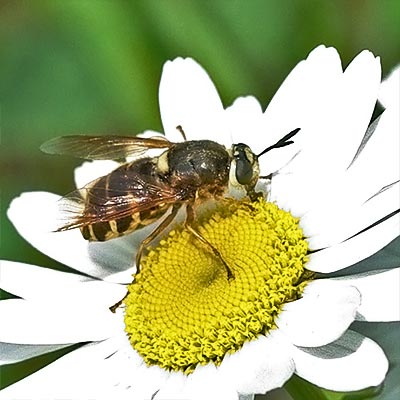 Soldier fly seems an odd choice of names for a group of fairly sluggish, flower-loving flies, but apparently someone thought that their stripes were reminiscent of gaudy [military] uniforms. An alternate explanation, offered in 1912 by Professor L.C. Maill in The Natural History of Aquatic Insects, is that “From the back of the thorax two spines stand out towards the abdomen [this is a characteristic of adults in the genus Stratiomys], and hence the name (Stratiomys), which means the ‘armed Fly.’” Professor Maill builds on observations made by pioneer entomologists like Jan Swammerdam (1637–1680, check out his Wikipedia entry), who did thorough observations of the life histories of many insects. In Europe, they really got into this “soldier” thing, and their SFs have common names like the Silver Colonel, the Barred Green Colonel, and the Ornate Brigadier.

The adults are found nectaring on flowers (or on dung) worldwide (especially in Neotropical haunts), near the wet areas their young require. Larvae of some species are remarkably tolerant to adverse conditions like high temperatures or salinity, and some are found in sewerage outflows. The typical aquatic larva lives at the edge of a pond or lake, in still, shallow, somewhat shady, nutrient-rich waters clogged with algae and emergent vegetation (in other words, one of the BugLady’s favorite addresses). Non-aquatic larvae may live in damp moss, sod, animal droppings, decaying wood, or under tree bark.

The BugLady believes that these photographs are of members of the two common genera—Stratiomys (the bulky, yellow and black adults) and Odontomyia (the trimmer, green and black flies) (unless there’s a Heterodiscus in there, too). There are about 30 species apiece of the first two genera in North America, and sources admit that the classification of the whole gang needs a little more work (one must, of course, scrutinize the rear end of the male to make a positive ID). As a family, SFs have antennae that are T or Y-shaped, and they stack their wings over their abdomen like closed scissors when at rest. They do not bite or sting. 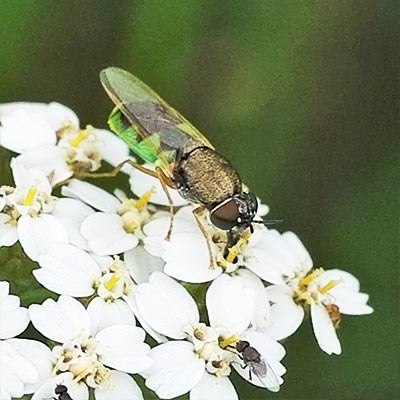 SFs lay their eggs on aquatic vegetation or floating debris in shallow water. Larvae are long, slim, segmented, flattened, and legless, with heads that look retracted into the thorax, and with eyes that stick out from the sides of the head. Their mouths, with which they eat algae, organic detritus, and tiny animals, are described by Voshell in A Guide to Common Freshwater Invertebrates of North America as “two parallel hooks that move vertically, something like snake fangs.” At the opposite end is a circular fan of non-wettable hairs that surrounds two breathing pores (spiracles) and acts as a floatation device. SF larvae back up to the surface film to get a breath of fresh air.

The larva’s hide is toughened and stiffened by hexagonal calcium carbonate crystals. The venerable Elsie B. Klots says, in The New Field Book of Freshwater Life, that “stiff heavy deposits of calcium carbonate produce the characteristic shagreen” (Merriam Webster—“an un-tanned leather covered with small, round granulations and usually dyed green; the rough skin of various sharks and rays when covered with small, close-set tubercles”). Check out the Bug Guide to see some typical aquatic larvae.

Larvae are mobile, but not agile. They swim down through the water column by wriggling back and forth like a slow motion version of a midge or mosquito larva. Getting back to the surface is simply a matter of staying still and floating to the top.

The fairly impenetrable exoskeleton of the larva serves double duty as a case (puparium) for the pupa. Professor Maill notes that the adult fly is much smaller than the larva:

The Insect becomes rigid; its skin hardens and contracts to some extent … and occupies only the fore part of the space within the larval skin…. The great reduction in size of Stratiomys during transformation is an extreme case of what may often be remarked in Insects. The larva gets some unknown advantage from a length and bulk which would apparently be inconvenient to the flying Insect.

The pupal stage is short, and the adult escapes its floating case by splitting the dorsal (back) side of the skin and climbing out into the air. The puparium may serve as a temporary raft while the adult is pumping up its wings. 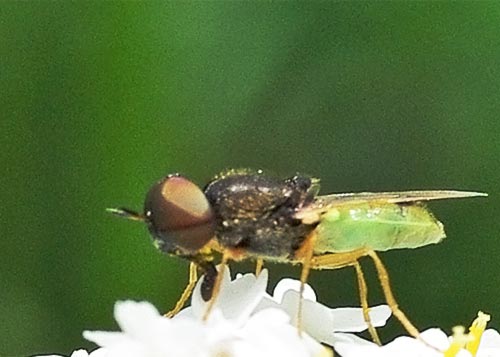 Remember, BugFans—if it looks like a bee, look again.