BugFans who want to finesse identification can always refer to them thoughtfully as the “Spring Azure Complex” and can indulge in a bit of Bug “one-up-man-ship” by lamenting the lack of DNA sequencing on the group. Remember, though, the words of biologist William Keeton, who said that humans are the only organism to whom this taxonomic lumping and splitting and nattering makes any difference. The organisms themselves know who they are—in this case, they are butterflies in the family Lycaenidae, the Gossamer-wing butterflies, a large group of butterflies that can be found around the globe. The BugLady knows them as tiny bits of sky that flicker through sun-dappled swamps, streamsides, woods openings and edges.

SpSpAs typically emerge early and can survive the frosty nights of mid-spring. Compared to the Summer Spring Azure, the SpSpA is darker, and its black spots may be larger and more distinct. Both species are sexually dimorphic (two forms); in this case, the females’ wings have wide black borders and the males’ don’t. Their wingspread is ¾” to 1 ¼”. Most references say that Wisconsin’s SpSpA is the species Celastrina ladon (or the subspecies C. ladon ladon). Others point out that because C. ladon’s chief food plant, flowering dogwood, doesn’t grow in Wisconsin, our earliest SpSpA is likely C. lucia (or C. ladon lucia). 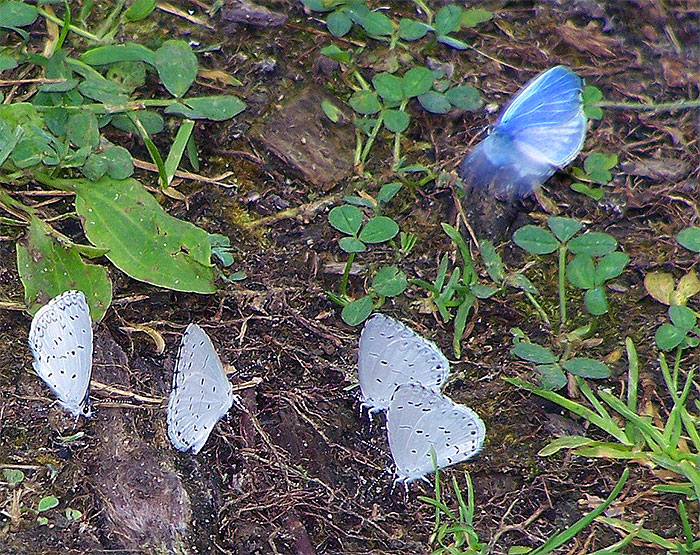 In order to fly in April and May, SpSpAs overwinter as pupas. Adults don’t live long or eat much. They may drink a little nectar or get liquid and minerals from the mud (a behavior called puddling), and males may gather on damp ground in groups. Males patrol for mates in forest openings and edges and along forest trails, sometimes ascending to the tree-tops in the thin sunshine of spring. A female will mate within hours of emerging. She lays her eggs the next day on the flower buds of host plants like maple-leaved viburnum, black cherry, and sumac, and then she dies. When her eggs hatch, the caterpillars—green, conspicuously segmented, and covered with white stubble—eat, first the flowers and then the developing fruits. The flowers they eat tend to be frequented by ants (unsung pollinators of flowers), which discover, care for and protect the caterpillars. In return, the ants harvest honeydew produced by the caterpillars. The larval stage takes about a month, but the resting/pupal stage is a whopper, lasting from early summer until the next spring.

The second Azure, which succeeds the first chronologically, is the “Summer” Spring Azure (Celastrina neglecta), sometimes listed as a subspecies C. ladon neglecta. If you get one to sit still for you, you may note that the SmSpA has lighter underwings than the SpSpA, and its black spots are smaller and less distinct (to see an Azure with its wings folded is missing the point; it is the tops of their wings that give Azures their name). Their wingspan is about an inch. An Azure seen after mid-June is most likely a SmSpA, but it never hurts to check them. SmSpAs fly from June until the first frosts, in parks and open fields as well as wood openings and edges. 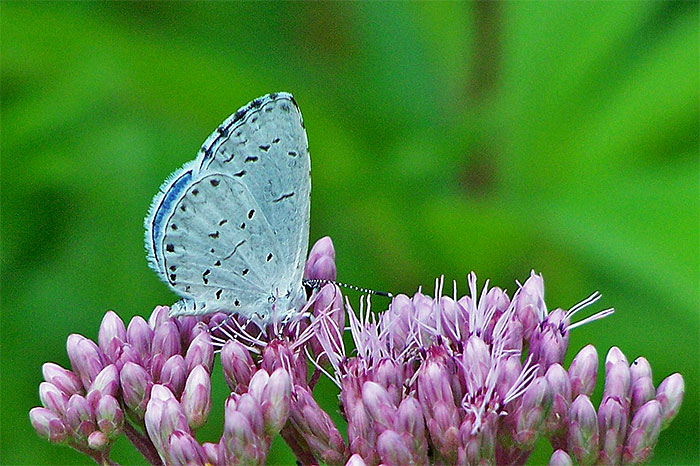 Its life cycle is similar to that of the SpSpA, with the same symbiotic assist from ants. Its larval host plants include later-blooming relatives of the SpSpA host plants. The pupae of the two species are very similar, and one reference noted that if they are separate species, they separated recently (geologically speaking), perhaps as little as a few thousand years ago. The pupa of the SmSpA does not rouse when the soil warms in spring; it waits until early summer to emerge. There are two broods each summer, so SmSpAs decorate the landscape until fall.

A Wild Card Azure is the newly-recognized (2005) Cherry Gall Azure (CGA) (C. serotina), which occurs in Wisconsin and is said to take up the slack between the decline of the SpSpA and the emergence of the SmSpA. The caterpillar of the CGA has adapted to feeding on the nipple galls created by eriophyid mites (of previous BOTW fame) on cherry leaves.

The tails of the Eastern Tailed Blue (Everes comyntas) are not visible in flight. In fact, the tails for which they are named are fragile, and wear-and-tear renders many tailed blues tail-less. They can still be told from the Azures by the two orange spots on the hind wing right above the tail (and just for fun, check out some pictures of hairstreaks). The top surface of a male’s wings is purplish blue, and a female’s wings are brownish. They change seasonally, too; the first brood of summer has brighter males and bluer females than the last. ETBs are common, tiny (they can be half the size of a SmSpA), sun-loving butterflies of fields, restored prairies, power line rights-of-way, gardens, and other open areas. 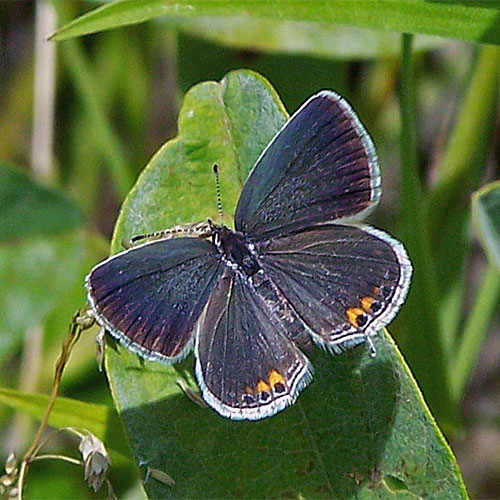 Adult ETBs have a short proboscis and so feed at flowers with easy-to-reach nectar, and adult males gather at mud puddles. Caterpillars eat the flower buds, flowers, seeds and new leaves of their host plants in the Legume family like yellow sweet clover, alfalfa, vetch, white clover, wild pea, bush clover; and tick-trefoil. As food generalists, they can use a succession of host plants and produce several broods that fly during the summer and well into fall. ETBs overwinter as caterpillars (often in the seed pod of their legume host) and pupate the following spring. 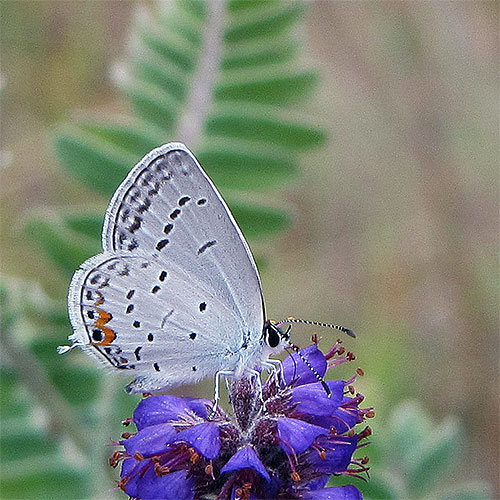 The BugLady saw her first Tiger Swallowtail on the first of May, and two Monarchs on May 3, and Red Admirals are everywhere. For dire predictions about Monarch populations in the near future, check Monarch Watch.org. And remember to make Wisconsin Butterflies your first stop for information about the butterflies. Yes, butterflies have wings and can (and do) go anywhere, but the site will familiarize you with the state’s “usual suspects.”