One of the first butterflies to appear in spring is the Juvenal’s Duskywing, which will soon be gracing the sunny roadside ditches. It looks a lot like the Northern Duskywing included here, but since the skippers are virtually interchangeable—look at the skipper pages in your favorite butterfly book if you doubt that—it’s standing in for the Juvenal’s. When they land, they are well-camouflaged among last year’s dead leaves.

The Bug Lady really, REALLY doesn’t do skippers. She loves doing the Riveredge Butterfly Count each year. She’ll haul her books, binoculars, camera and the worn-out, 4”x6” “Guide to Wood Nymphs” card she designed along the Cedarburg Bog boardwalks for hours, rain or shine or heat or bugs, but she doesn’t do skippers. To the Bug Lady, 49% of skippers are basically gray-brown and 49% are gray-brown with orange splotches on their wings.

The Silver-spotted skipper likes sunny edges, clearings in woods, paths, etc, where it perches on vegetation to await the female of the species (cher chez la femme). 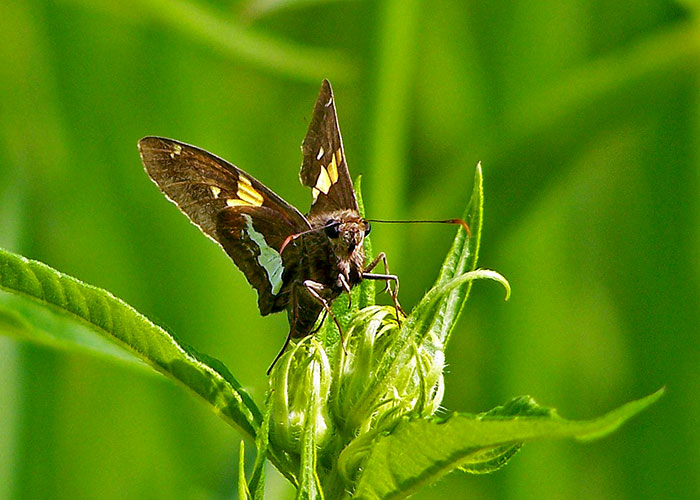 Its caterpillars are chartreuse, with a brown, space-helmet-shaped head. The larval food plants are locusts and other legumes, and there may be 2 or 3 broods a summer. The caterpillars have a dynamite (excuse the pun) way to distance themselves from their frass (poop, to non-lepidopterists). If you are frass-sensitive (frass-tidious?), stop reading now. It is not, however, squeamishness on their part, they are trying to avoid detection by parasitic wasps that locate potential hosts for their young via chemicals in the frass. When a pellet of frass reaches the end of the gut, it is stopped there by an anal comb. This causes the blood pressure in the hind end to increase substantially, and when the comb finally does release the frass, the pellet may sail up to 150 cm (38 body-lengths) from the caterpillar (this “dynamite” information comes from Caterpillars of Eastern North America by David L. Wagner).