Having delved last time into the mysteries of the meniscus, the BugLady is introducing more creatures of the surface film, the semi aquatic springtails (SASTs). Springtails are an amazing bunch of former-insects—older insect books list them in class Insecta (they do have 6 legs), but recent thinking, supported by DNA analysis, is that they belong in their own class—Collembola. They seem to have evolved from a non-insect ancestor, and they evolved alongside insects. The first fossil of a terrestrial arthropod ever found was a springtail that dated back 400 million years.

There are lots of generic springtails leaping around—more than 8,200 species worldwide (700+ in North America). Most kinds of springtail are found on land, leading invisible lives in leaf litter and soil, anyplace that has a little moisture, even Antarctica. Depending on the humidity (and humidity is very important to an ST) there can be massive numbers of individuals—300 million STs (or more) on/in an acre of prime land. 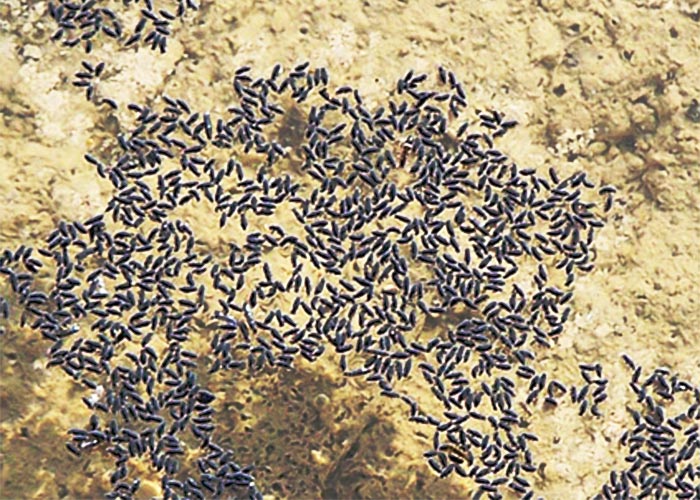 A word about the general appearance/biology of springtails: There are two basic body types—cigar-shaped and globular. Like the Jumping Bristletail, of recent BOTW fame, they wear their mouthparts on the inside (endognathous) rather than the outside (which makes it impossible for springtails to nibble on people, despite anecdotes to the contrary). They have antennae and tiny, simple eyes, but neither they nor their ancestors ever had wings (they are primitively wingless); and because most lack a tracheal system, they breathe through their cuticle. Their cuticle is waterproof/hydrophobic (check out this Discover magazine article for a scanning electron microscope’s view of ST cuticle). Some species secrete noxious chemicals when provoked. 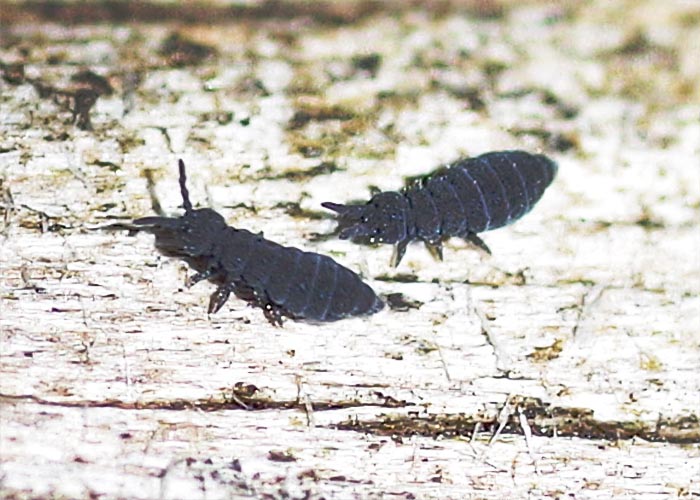 A springtail’s metamorphosis is called ametabolous (ametabolous insects emerge from eggs into immatures of virtually the same shape as the adults. They’re considered ametabolous because the insects simply get bigger and do not undergo any distinct rearrangements of body structures between the immature and adult stages, bugguide.net), and they continue to molt throughout their lives. Although the BugLady has only seen drab STs, they come in every color of the rainbow. It is speculated that they evolved in colder climes, and many species are active in the early days of spring and at the tail end of fall. 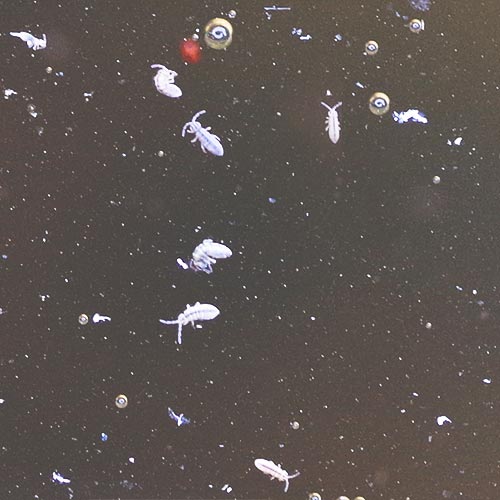 What makes a springtail a springtail? Most species have, on the lower side of their abdomen, a jumping organ—a forked structure called a furcula that attaches near the end of the abdomen and is “folded” forward, held against the middle part of the abdomen by a clamp called a tenaculum. When the furcula is released, it slaps down onto the substrate (whether land or water) and the ST is launched. It can sail through the air more than 20 times the length of its 3mm body (it uses this trick when it’s alarmed, not for everyday locomotion). The springtails that inhabit the water’s surface have flatter furcula. 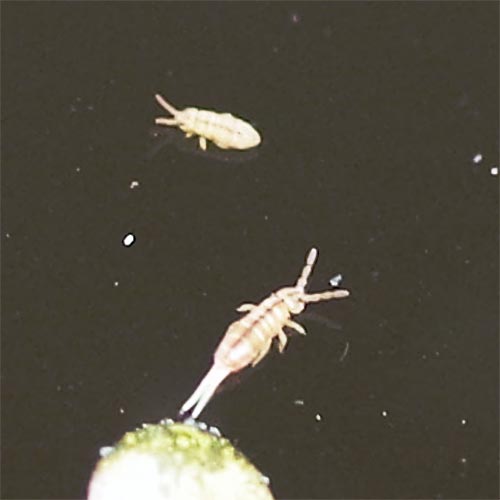 The name Collembola comes from the Greek kola and embolon (glue peg), which refers to a peg-like structure underneath the first sections of the abdomen. Scientists long believed that this structure, the collophore, contained a mucous/adhesive/glue that helped the springtail stick where it wanted to stick. Now it is thought that, while it may provide traction, it functions more importantly in helping the springtail take up/regulate moisture.

Because the term “aquatic” is reserved for critters that actually live in the water, surface-dwelling springtails are referred to as semi-aquatic springtails, and they are found on the stillest of still waters. About 15 species of North American STs are semi-aquatic or riparian (though the equally water-repellant terrestrial STs may be found on the water if spooked onto it). Like water striders, the SAST’s claws are not situated at the tips of their stubby little legs but are located higher up the leg, above the surface film, so as not to rend it. The little, gray Podura aquatica is a very common SAST; the BugLady believes that the striped ST, photographed on the Ephemeral Pond at Riveredge Nature Center, is Isotomurus tricolor (or maybe I. palustris). 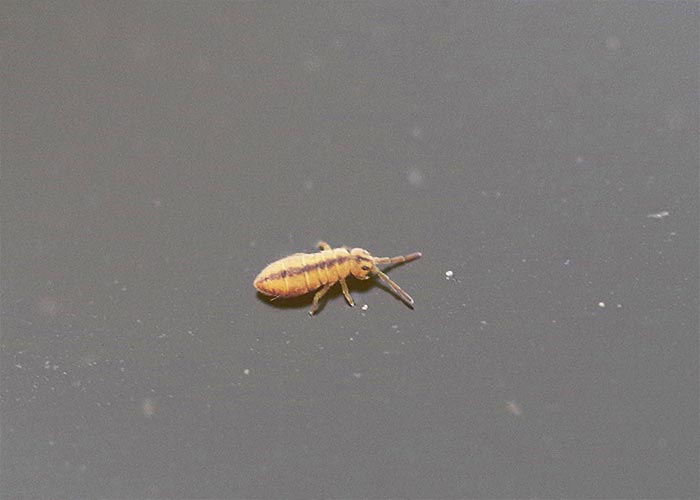 SASTs cruise/walk/hop over the surface, often in groups, and their shed skins are often seen on the water. Adults produce pheromones to draw a crowd. They feed on stuff that they find under their feet, chewing on dead organic matter, algae, bacteria, and fungal spores on the surface film (some are adapted to eat lipoproteins in the surface film). As a group, they’re labeled detritivores. They’re eaten by fish, amphibians, and aquatic insects, both as eggs and after hatching. They get from one pond to the next with the help of seasonal flooding. 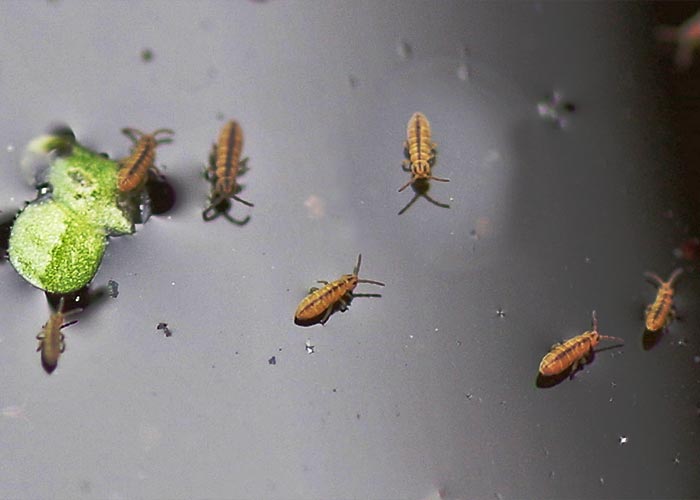 When a young SAST’s fancy turns to love, he deposits on the surface film a spermatophore for a female to collect. She does and they go their separate ways, never meeting. The BugLady read two different accounts of egg laying by SASTs. In one, the female fights her way down through the surface film and deposits her eggs below it. In the other, although she is hydrophobic, her eggs are not, and they sink into the water. In either case, when they hatch, the pale, new springtails are, until they pop up through the surface film, considered truly aquatic. Reproduction is continuous within the masses of SASTs; adults live a few months at best, and they overwinter as eggs (and maybe as adults).

According to The Natural History of Aquatic Insects, by Louis Compton Miall (1895), one of the earliest accounts of the peculiar lifestyle of aquatic springtails was penned by Charles DeGeer. In 1740, DeGeer removed some STs from water and noted that they shriveled and died within two or three hours. He suspected that maybe the tube/peg might have something to do with water uptake to keep them moist. He also placed some in a vessel filled with water and observed that they “crept to the bottom and lived for several days.” Miall didn’t think that STs occurred below the surface, but noted that when he collected submerged vegetation and put it into a container of water, he found STs on the surface the next day. Miall speculated that adults climb down through the surface film on plant stems to forage when pickings on the surface are slim and to overwinter in muck at the bottom of a pond.

SASTs even have a stamp!