Sawflies are considered “primitive” wasps in the Order Hymenoptera. In keeping with the vagaries of common names, sawflies are not flies (order Diptera^mdash;“two-wings”) but are wasps, with the requisite two pairs of wings for the order Hymenoptera (membrane wings). Donald W. Stokes in A Guide to Observing Insect Lives, discusses that “primitive” label and traces the evolution of the wasps’ feeding habits and where/how they deposit their eggs—from vegetarian-non-social-species-using-wood-penetrating-ovipositors, through chemicals-for-gall-making-stage, and chemicals-for-paralyzing-insects-for-larval-food-caches stages, and finally to the development of social species and the modification of the ovipositor into a stinger. 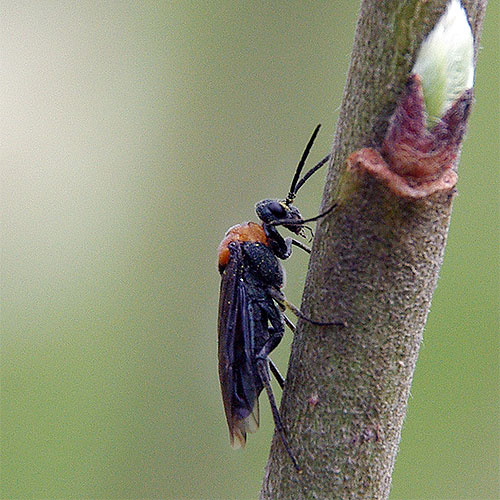 The adults, which eat little or nothing, are typically seen in late spring or early summer. They look like/mimic thick-waisted, sometimes-colorful bees, but they have no stinger. Birds prey on sawflies—looking like a stinging wasp doesn’t seem to benefit them.

Why Sawflies? Because the implement the female uses to deposit her eggs is described as “saw-like.” She “saws/bores” multiple holes in leaves or twigs. In general, sawflies overwinter as larvae, in cocoons they make on pine needles, under bark, in stems, on twigs or on the ground. They pupate as the weather warms, chew their way out of their pupal case, and emerge in spring to mate and lay eggs. Stokes says that females of one species make a row of incisions in a twig before laying an egg above the dotted line. The twig dies and wilts above the perforations, and the larva bores into the stem, sometimes traveling all the way to the root (a practice that doesn’t thrill forest managers).

The larvae both resemble caterpillars (but true caterpillars have fewer legs, if you’re counting) and, like them, eat veggies. As a group, sawflies eat a wide variety of plants, but most species limit themselves to just a few food sources. Stokes says that they often curl the end of their abdomen around a their food source as they eat, and Frost, in Insect Life and Natural History observes that they are often overlooked because they conform their body to the shape of the leaf they are gnawing on. The larvae of some species make galls or are leaf-rollers or leaf-miners; many species have gregarious larvae that defoliate portions of plants, but they do not often cause permanent damage. The BugLady apologizes for the shot of the larvae—it’s a scanned slide, and the BugLady seems not to have learned the “secret handshake” as far as scanning slides goes. 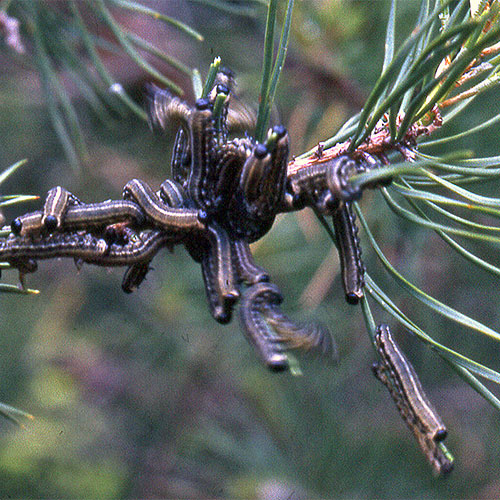 When you startle a bunch of sawfly larvae that are chowing down on vegetation, they assume an “S” shape, with front or rear end elevated (depending on whose book you read, and one end of a sawfly larva looks pretty much like the other end of a sawfly larva) and they thrash their heads/rears around to spook you. Ask Nancy C. to do her imitation of an alarmed sawfly larva.