First of all—not flies. Sawflies belong to the huge (more than 150,000 of the million-plus insect species on the planet) Ant-Bee-Wasp-Sawfly order Hymenoptera (membrane-wings) (four of them), not the fly family, Diptera (two wings). They are sometimes called plant wasps.

Here’s their taxonomic pedigree: In descending order (from the larger groups to the smaller, more restrictive/definitive groups), sawflies are placed within a kingdom (Animalia), then a phylum (Arthropoda), class (Insecta), order, family, genus, and species. In larger bunches of insects with more complicated relationships, scientists need to set up intermediate groups (“sub-this” and “super-that” and “tribe this” and “unnamed taxon that”) within these fixed divisions to make sense of it all.

Sawflies are in a sub-group under Hymenoptera called Symphyta, which includes a number of different sawfly families, plus some other families of wasps that, like sawflies, don’t have wasp-like waists. They are often described as “primitive wasps,” and, in fact, an ancient line within the Symphyta seems to be the ancestor group for the non-sawfly Hymenopterans (the ants, bees, and wasps). Sawfly comes from the shape of the female’s ovipositor, which, according to one source, she carries folded up but can flip open like a jackknife, and which she uses to saw open a hole in plant tissue so she can oviposit (she can’t sting, so resembling a wasp is to her advantage). The three sawflies in this BOTW are in the Common/True sawfly family Tenthredinidae (which is divided into six subfamilies, three of which are represented here). And that’s quite enough about their taxonomy (which is, of course in a state of flux).

Second of all—there are a lot of them. There are in the neighborhood of 90,000 (and counting) different kinds of insects in North America, and more than 1,100 of those species are in the group Symphyta (which has about 8,000 species globally). Most North American sawflies are in the family Tenthredinidae—hence the name Common sawflies —and according to one source, 90% of the commonly-seen sawflies are Tenthredinids. The colorful adults are often found on flowers, where they may eat nectar or pollen (some are carnivores/omnivores, and others eat little or nothing) and where some may be important pollinators.

Third, they can be pests—Sawflies have quite an internet presence because many of their larvae—selective eaters that can often be ID’d by their host plant—can be pests on a wide range of flowering and some non-flowering plants like ferns, horsetails, and mosses.

Sawfly larvae are free-living and caterpillar-like and can be told from butterfly/moth caterpillars because sawflies have more than five prolegs (those hydrologically-operated abdominal stubs that are tipped by grappling hooks). The Missouri Botanical Garden website points out that like Lepidopterans, sawfly larvae have three pairs of hardened, true legs on the thorax, but they have more prolegs—at least enough pairs to spell SAWFLY. Most larvae feed on leaves, draping or coiling the end of their body over the leaf edge, and a lot of them are skeletonizers (there are also stem and leaf miners, and gall-makers). Toxic leaves don’t seem to deter them, and many are able to release a noxious liquid at persistent predators. Despite that talent, and the fact that discerning a single larva within a glob of them is confusing for predators, and their disconcerting habit of rearing up the front half of their bodies into an “S” shape in unison when startled, they are fed upon by other insects and by birds, are parasitized by the larvae of a bunch of wasps, and their pupal cases are found and eaten by a variety of small mammals. Most Tenthredinids have a single generation per year in this neck of the woods, overwintering as pupae on twigs or in leaf litter or as mature larvae that will pupate in the spring.

The BugLady used a shot of a sawfly ovipositing on an Equisetum (horsetail) in a recent BOTW, and last summer she found a sawfly ovipositing on ferns, and then there’s that picture of a sawfly larva on a berry that’s been nagging at her. Some people think that when you know an organism’s name, you know everything about it, but finding out an insect’s name opens the door to finding out its story—the “what about it?”. Alas, the names of these three sawflies are approximate, and there isn’t much information about them out there.

The sawfly on the Royal and Cinnamon ferns is probably in the genus Strongylogaster, whose larvae famously enjoy ferns. They were ovipositing on Royal ferns at Riveredge Nature Center, flying and perching non-stop. The BugLady seems to recall that there was a lot of action as the plants were putting up their fertile stalks, and a little later, the sawflies moved to the related Cinnamon ferns. Note to self: check that phenology this summer. Several of the 11 North American species in the genus are western, and several others concentrate on bracken ferns, so this may be Strongylogaster tacita. Here’s a generic Strongylogaster larva.

The sawfly on Field horsetail is probably in the genus Dolerus. The offspring of at least six species in this genus feed on field horsetail (Equisetum arvense), and it looks a lot like a Dolerus sawfly on bugguide.net that is labeled “Unidentifiable beyond genus.”

There’s a lovely account by Edward A. Fitch (Essex, England) in the 1881 issue of The Entomologistabout his attempts to rear sawfly larvae found in Equisetum stems. “It is curious that until last year, the life-history of the Doleridae was quite unknown, despite the fact that we have fifty-seven European species, many of which are among our most common sunflies. For some years, I have found a sawfly larva feeding within the stems of Equisetum, which I strongly suspected to belong to aDolerus, but several, not very determined attempts at rearing the imagos failed… It feeds inside the stems of Equisetum limosum, not eating through the nodes, but apparently coming out at the end and biting into the next division, just above the joint; generally, however, there is but one hole between the joints, and this mostly at the base, so probably the larva exits at the entrance hole… My specimens hibernated in little earthen cells, quite at the bottom of the cage, which contained about six inches of earth… I could discover no trace of silk, or anything worthy of the name of a cocoon.” Here’s a generic Dolerus larva.

And then there’s the sawfly larva that the BugLady photographed pre-bifocals. A lovely shot of Starry false Solomon’s seal berries turned out, on the monitor, to have a mystery guest clinging to a berry like a tiny limpet. This must be one of five species in the genus Phymatocera, the only sawfly genus that feeds on False Solomon’s seal. Here’s an adult: http://bugguide.net/node/view/524481/bgimage. These are weak flyers that don’t expand their boundaries quickly. Note to self—when the leaves of False Solomon’s seal start looking shredded this summer, check for photo-ops. 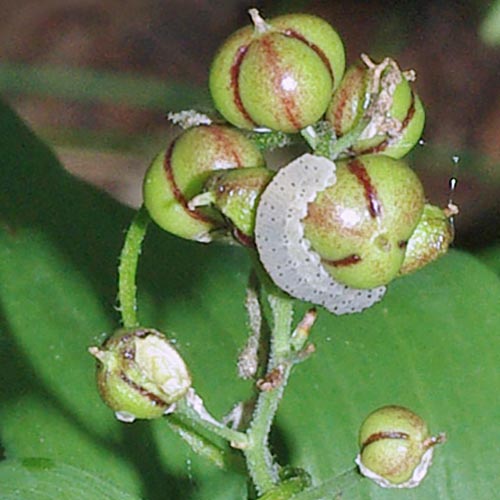