The BugLady spied this big (wingspread about 2 ½”) beautiful Salt Marsh Caterpillar Moth (Estigmene acrea) recently during a trip into the field with the dog. The BugLady loves salt marshes and she looked around quickly, hoping that the shallow, ancient seas had returned, but no dice. We have to remember that the Salt Marsh Caterpillar Moth (SMCM) was named at a time (1773) when the Atlantic coast was the center of the American universe, but you’d have to travel all the way to Alaska and the Yukon to avoid it. It likes sunny places—wet, dry, and disturbed. In his epic volume The Moth Book (1903) (still the BugLady’s go-to book for moth ID), Holland says that it is “altogether one of the commonest insects in the Middle Atlantic States.” 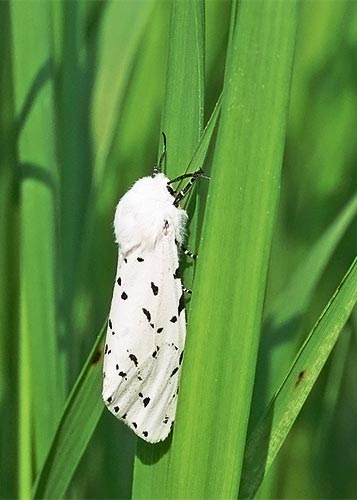 Like the famous, weather-forecasting wooly bear, the SMCM (a.k.a. the Acrea moth) is in the tiger moth family Arctiidae. Try the Bugguide site here for a great mug shot. The BugLady dipped into her “unidentified caterpillars” folder and thinks she has correctly matched these hitherto unknown caterpillars to their adult.

Mama SMCM lays masses of —from 400 to 1,000 at once—on host plants, and she (not surprisingly) dies a few days later (though she may squeeze out another clutch of eggs before that!). The eggs hatch in four or five days, and the caterpillars hang out and feed together during their first two instars (more than quintupling their size) before going their separate ways. Some sources say that they overwinter as caterpillars (like their wooly bear cousins) and pupate in spring, and others say that they build a roomy cocoon for the winter.

If you eat a lot of different food, you get to live in a lot of different places; the secret to having almost continent-wide distribution is having a broad list of caterpillar host plants. Although the Salt Marsh Caterpillar (SMC) was named because it was seen noshing on hay grasses in salt marshes near Boston, it is not a big grass-eater. It’s list includes herbaceous and woody plants, wild plants and cash crops. It consumes a bunch of broad-leaved field plants like pigweed, Amaranthus, Eupatorium, mallow, ground cherry, and clovers; ag crops like corn, cabbage, peas, carrots, onions, beets, beans and tomatoes; and sometimes the leaves of apple, walnut, cherry, elderberry, poplar and Juneberry. SMCs are leaf skeletonizers, and one intrepid scientist calculated that they can eat over 400 sq cm of leaves before pupating. According to Wagner in Caterpillars of Eastern North America they’re reported to indulge in a bit of cannibalism&mdash’or at least scavenging—of their brethren. The incentive may simply be protein, or they may be harvesting alkaloids – more about that later. Waste not, want not.

The SMC is a very mobile little critter, moving fast and far looking for edibles. SMCMs drop down and play dead when startled; ditto SMCs, but they may deploy some web on the way down. There are reports of the web causing small SMCs to go airborne, but that could be accidental. Late summer movements often take the increasingly numerous caterpillars from dying “weeds” at the edges of crop field into the crops, where they make pests of themselves.

Avert your eyes, children, this next bit is about sex, albeit couched in chemical terminology. Long story short, SMCs seek out food plants that contain certain pyrrolizidine alkaloids (PAs), which they consume and sequester in their bodies. SMCMs retain those alkaloid levels as adults. It turns out that these chemicals are pheromone (airborne “perfume”) precursors (they also make the caterpillars taste bad, and they were supposed to protect the plant that originally made them from being grazed).

When a young moth’s fancy turns to love, he inflates two curved structures on his abdomen called coremata, from which he releases pheromones. The more PAs he ingests, the bigger his coremata. The coremata of laboratory-raised, alkaloid-starved SMCMs don’t develop fully and don’t produce pheromones; these “handicapped” males simply respond to female pheromones (the BugLady knows what you’re thinking. Stop it.). The PAs also affect the development of the SMC’s nervous system and taste buds. The alkaloids do not seem to have a hormonal benefit for females.

SMCMs have a very cool courtship. Using the pheromones that PAs allow him to produce, the male SMCM floods the area with “scent.” This attracts females and more males, creating a “lek,” a group display area. After a few hours of frenzied “pheromone-ing” by males, the females then call—deploy their own pheromones to attract a little one-on-one attention from Mr. Right.

Tiger moth Cool Fact: When they hear the echolocation clicks of a hunting bat, they answer with their own clicks. This may warn bats of nasty-tasting/toxic prey ahead or may even jam the bat-radar.