Unlike the BugLady’s usual subjects, some of which are barely visible to the naked eye, today’s three beetles (in the Leaf beetle family Chrysomelidae) are large enough to qualify as charismatic megafauna—at a half-inch-plus, these domed beetles are lunkers. Two of the beetles are in the genus Calligrapha (beautiful writing), and the third is not, though the BugLady tried hard to put it there.

Chrysomelids are vegetarians for their whole lives, eating a variety of plant tissues from the outside or from the inside, above and below the ground. Their numbers include some serious plant pests like the Colorado potato beetle and the asparagus beetle, and also some species that are used as biological controls of pest plants. It’s a huge group, with almost 2,000 species in North America alone. Chrysomelids generally produce a single generation per year; most overwinter as adults and hit the ground running in spring.

There are 38 or so species of Calligrapha (tribe Chrysomelini) in North America (a dozen in Wisconsin and about 100 worldwide); theirs is a much worked-over taxonomy that continues to be up in the air. Jesus Gomez-Zurita, who has studied the Calligrapha, calls them “a large American leaf beetle genus of imprecise taxonomic boundaries.” Nailing the genus is not too difficult, but ah, the species!

The ink-blot patterns are variable within each species, and a more definitive characteristic, the color and shape of the lower edge of the elytra (the elytral epipleura) (the elytra are those two hard modified wings that form a protective cover over the flying wings) can’t be seen unless the beetle is belly-up. But, beetle anatomy aside, this is a group of supremely picky eaters, and most species of beetle are connected with only a single species of plant. To a large extent, by their host plants shall ye know them (of course, if a bug is sitting on a plant, it might just be sitting on a plant).

Along the way, at least seven of the North American species of this confusing genus have adopted the practice of parthenogenesis (virgin birth) and have unisexual populations. Females create only female offspring, offspring that are genetic copies of their mothers (thelytokous reproduction), and males have disappeared. A rationale for this development in the Calligrapha is that when two beetles of different-but-visually-identical species breed, the resulting offspring may be non-viable or sterile, a waste of energy for the beetles (or they may not—because it seems that the parthenogenic species of Calligrapha are, themselves, of hybrid origin).

The BugLady may devote a whole episode to The Bugs of Ninebark when they’re in bloom next year. Ninebark (Physocarpus opulifolius) is a shrub in the Rose family that produces bushels of flowers and has some interesting insect associations. The BugLady found this colorful Ninebark Leaf Bettle (Calligrapha spiraea) tucked into a flower head on one walk, and later found another adult and a larva. The Ninebark leaf beetle inhabits the Northeastern quadrant of the continent and is one of 14 species in the scalaris group of the Calligrapha. Its species name, spiraea, seems misleading, but at the time the beetle was named, ninebark was classified in the same genus as the shrub Spirea. 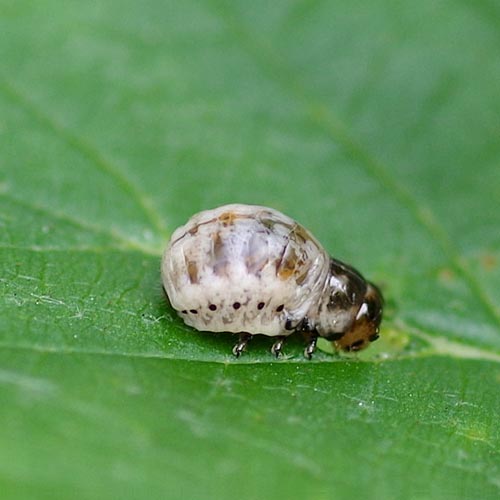 A number of the Calligrapha spiraea “hits” were from garden stores, University Extension, and exterminator sites, because the Ninebark leaf beetle is bent on partially defoliating ninebark (and, according to a few authors, Spirea and Ribes (current/gooseberry, which the BugLady doubts, since they’re not even in the Rose family). A healthy plant can stand up to the attack.

The really spiffy, black and gray (almost lilac) Calligrapha X is a member of the scalaris group, too, a group whose numbers will undoubtedly increase with more scrutiny (Bugguide.net doesn’t yet have pictures of all of the 14, and it describes them as “a large lineage of forms sometimes very different phenotypically”) Phenotype refers to the “observable physical or biochemical characteristics of an organism, as determined by both genetic makeup and environmental influences.”

Anyway, trying to zero in on an identification of this beetle has made the BugLady bug-eyed. BugFans can do a little scalaris sleuthing of their own on the Bug Guide website, and by downloading Harvard University’s Breviora issue on this little leaf beetle. (don’t worry about the technical descriptive terminology, just enjoy the pictures). The scalaris group includes one species that is associated with birch (C. ignota) and three that have basswood as a host, including C. amator. Calligrapha X was sitting on a birch—next to a basswood. The BugLady knows what it’s not and what it might be, and sometimes that’s as good as it gets.

And then there’s the non-Calligrapha, which is a Cryptocephalis mutabilis (no common name). The BugLady spotted it when she was prowling around in the prairie one afternoon. Alas, it spotted her very shortly thereafter and reacted in the time-honored fashion of Chrysomelids everywhere—stop, drop, and roll—leaving her with one out-of-focus shot. Cryptocephalis mutabilis is, it turns out, in the tribe Cryptocephalini (hidden head) thus named because of the larval habit of making a portable case to hide in, a case that is largely constructed from excrement. Mom kicks things off, smearing excrement or “some other secretion” on her eggs after laying them. After popping out of the top of the egg, a larva adapts its now-empty shell into a home, using its own wastes to glue dirt and other material around the large end to “grow it.” Larvae also pupate in their Home Sweet Home. 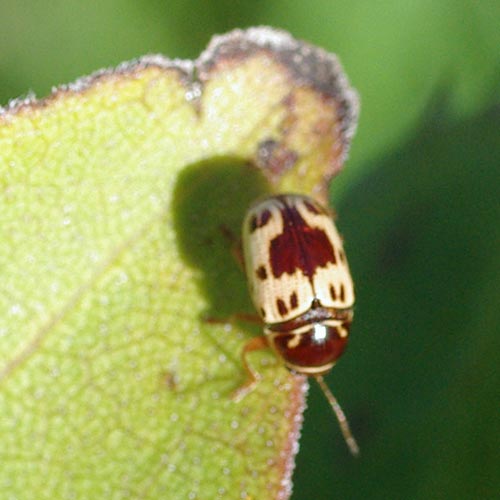 Beetle fans might enjoy taking a peek at a blog called “Beetles in the Bush, Experiences and Reflections of a Missouri Entomologist.”