The BugLady has forever been amazed at Red Velvet Mites. Is there anything more unlikely than a wee arachnid that looks like a plump, brilliantly red plush Beanie Baby (oh, wait—the BOTW series has been filled with the “unlikely”)? But seriously, why would a critter that dwells in soil and leaf litter bother to be so fancy?

There are mites everywhere, in every habitat, around the world, including on your person (we’re never really alone). The more-than-2000 species of mites are a very diverse and, because many are vanishingly small, a mostly overlooked crew. Mites (subclass Acari or Acarina) are the biggest group within the spider/tick/mite bunch, class Arachnida, the home of the eight-legged. Unlike true spiders, you can’t easily see where a mite’s cephalothorax (front end) stops and its abdomen (rear end) begins. Mite lifestyles vary tremendously, and immature mites (nymphs) generally make their living in a different manner than the adults. The common name Red Velvet Mite is a somewhat generic term for a bunch of often-unrelated mites that happen to be red.

The Red Velvet Mite du jour is in the family (probably) Thrombidiidae (you need a side-view of the mouthparts to confirm their family, but the BugLady is willing to go out on a taxonomic limb here), and in the genus (maybe) Thrombium (which prefers moist, organic soils). At about 5mm long, it is considered a giant among mites, except for the Giant RVM (more on GRVMs later). Scientists suspect that some of those red hairs may act as sensors in the mite’s often- gloomy world. While the eight legs of many other arachnids appear to radiate from a central point and spread out like spokes on a wheel, the RVMs’ leg arrangement is a bit different, sprouting from four spots on the underside of the cephalothorax. For a ventral view, check out Arachnid velvet mite.. 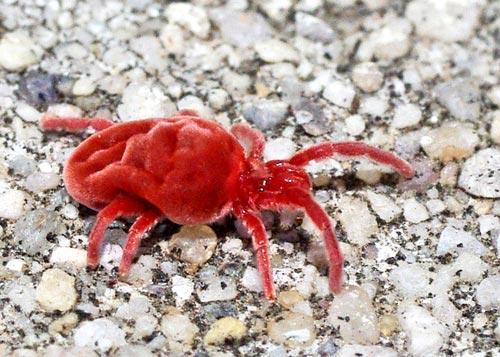 The RVM’s on-line presence is dominated by pictures (with occasional YouTube appearances) and misinformation. Pictures because the RVM is so photogenic, and misinformation because the mite bunch includes the even-tinier, similar-looking Red Spider Mites and Clover Mites (family Tetranychidae) that feed on flowers, and the Harvest Mites (family Trombiculidae) whose offspring are the notorious chiggers. And that’s almost enough Latin for today.

Exterminators and some gardening websites lump them all and espouse universal mite-i-cide (and many Bloggers pass along the “facts” they pick up at these sites). But, neither adult nor immature Thrombid RVMs bite your plants or your pets or you. Young RVMs are parasites (blood-suckers) on grasshoppers, daddy long-legs, beetles and other ground-dwelling, cold-blooded critters (including plant hoppers, apparently), which they attach to and ride around on. Adult RVMs eat insect eggs and prey on very small invertebrates (like ants) (if RVMs are on your plants, they’re hunting for something you probably don’t want there). Because they consume some plant-eating insects and because they eat the animals that eat the organisms that carry out the important work of decomposition, RVMs are considered helpful to ecosystems.

They have an exotic love life, described by scientists Liam Henaghan and George Hammond, as “not to be missed.” A male places his sperm droplets on elevated surfaces like twigs and grass blades, creating what Heneghan calls a “love garden” and Hammond (possibly not a sentimentalist) compares to “tiny golf balls on tees.” Then the male issues an invitation to the female in the form of an intricately woven trail of silk (In Xanadu did Kubla Khan a stately pleasure dome decree). If she is dazzled by his artistry, she will enter the garden and sit on/pick up the sperm. If a rival male encounters the “garden” he will trash it and substitute his own. Eggs are deposited in the soil, where a newly-hatched larva will find its first meal ticket. The young RVM larva goes through several stages before molting into an adult.

Red Velvet Mites in the News

If you think a 5mm RVM is fun, how about a 12mm (half-inch) RVM? The Giant RVM (Dinothrombium sp.) lives in some parts of North America, especially the Southwest. They are also called Rain Bugs, because they emerge and feed after it rains. For a bunch of pictures of these GRVMs, check out this post from the Sibley Nature Center, TX: Sibley nature center. An equally large GRVM (Thrombium grandissimum) lives in India and is sold in the bazaars there. The deep, red GRVM oil is used to treat paralysis and is also called “Indian Viagra.” Recent scientific studies indicate that various GRVM components have both antifungal and antibacterial properties.

And their awesome red color? Aposematism. Red is one of Mother Nature’s warning colors, used to advertise that its wearer is poisonous or distasteful or both. Scientists who were curious about the somewhat related Red Water Mite, of previous BOTW fame, powdered some and tried to feed the powder to fish (which turned up their noses). They expanded their experiment to include powdered terrestrial RVMs and got the same reaction from the fish. There are accounts of intrepid researchers who consumed RVMs and wished they hadn’t, but the source of the “flavor” is not known. Scientists speculate that the bad taste developed after the color, in order to protect this very conspicuous critter from predators. They also think that the orange pigments may offer some protection against the sun—RVMs desiccate easily, and some genera produce a waxy substance to coat themselves against water loss. The BugLady could not find any accounts of any RVM predators, and researcher George Hammond (the “golf tee” guy) reports, “I’ve put them on an anthill and no ant would touch them.”