Someone asked the BugLady recently if she ever runs into a bug who she doesn’t know. Short answer—all the time, but mostly her guesses are in the right ballpark (order—for sure; family—often). In the case of the Pygmy Backswimmer, she had to switch ballparks a bit (thanks, BugFan Gretchen). 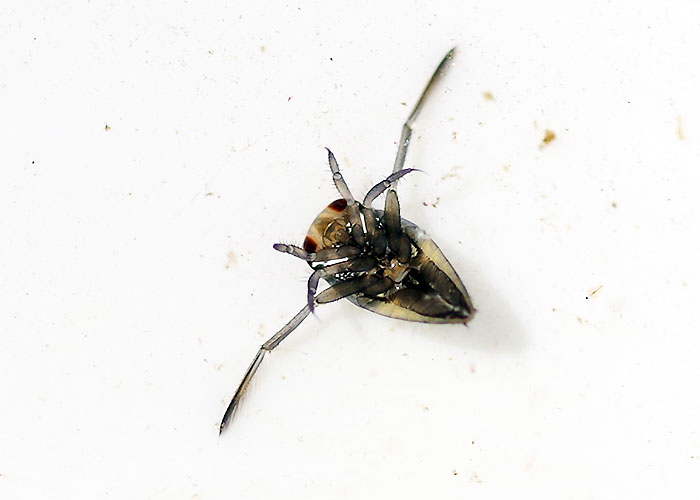 Anyway, the BugLady was out scooping and photographing pond critters recently, and she found this lovely little bug (emphasis on “little”). Because it was moving around with its dorsal side up (in the shallow end of the plastic spoon she uses for photography, at least) and because it lacked a prominent, hairy, oar-like third set of legs, she didn’t take it for a backswimmer (philosophical question—if you spend all your time swimming around with your ventral side up, does it become your dorsal side?). Here’s a picture of a correctly-oriented pygmy backswimmer.

First—the pedigree. Pygmy backswimmers are true bugs (order Hemiptera) and are in the suborder Nepomorpha, the aquatic bugs, along with water boatmen, giant water bugs, backswimmers, water scorpions, and more. It’s not in the family Notonectidae with the more familiar backswimmers (an infant backswimmer that she photographed that day is also pictured here); it’s in the family Pleidae, a family with maybe 40 species worldwide, five of those in North America. A number of different characteristics for separating the various species of Pleidae have been considered, adopted, and then rejected (microscopic structures on minute’ bugs), and bugguide.net notes that “the family is in need of revision.”

They occur globally except for the Poles and some distant oceanic islands, and almost all dally in clear, still, weedy waters. One North American species has extended its range to Guam, traveling tucked away in aquarium plants. Look for them, often in small groups, among the leaves of submerged vegetation. Though they may inhabit ephemeral ponds and can dry out for a while when the pond does, they generally live in permanent waters.

Today’s bug is Neoplea striola, the most common Pleid in eastern North America. It is tiny, hovering around 2mm (less than 1/8th of an inch), oval, with a strongly domed back, big red eyes (all the better to see you with, etc.), and very short antennae that it keeps tucked close to its head. It locomotes with its second and third sets of legs and grabs its prey with the first set.

Neoplea striola keeps body and soul together by preying on tinier aquatic stuff like mini-crustaceans and aquatic invertebrates; they’ve been known to take tiny fish and tadpoles, and they’re not above cannibalism. They eat lots of mosquito larvae, but apparently they leave other mosquito predators alone. They’ll also pick off, from below, springtails and other little stuff on the surface film. They use their eyes to hunt, along with vibrations, and possibly chemical signals. In a study published in Rotifera IX: Proceedings of the IXth International Rotifer Symposium (2000), researchers reported that although pygmy backswimmers are not opposed to eating rotifers, predator size was less important than the predator’s food-getting style and apparati, and that “The construction of Neoplea’s forelegs provides mechanical advantages in capturing relatively large prey, but is not well-suited for capturing and subduing small, mobile prey.” Here’s one feeding on a hydra.

Like other carnivorous Hemipterans, they insert their beak into their prey, pump in some meat tenderizer, and then slurp out the softened innards. Despite their size, they are eaten by predatory aquatic insects, ducks, and a few amphibians. Noctonectidae can deliver a memorable jab to the human anatomy, but Pleid beaks are just too small.

Some sources say that they swim well (they can swim with their dorsal side up, but they usually don’t), while others say that their swimming is barely adequate and they use claws on their hind tarsi to crawl among the leaves of aquatic plants. Flight? Not so much. Populations include both micropterous (short-winged) and macropterous individuals, the first, essentially flightless, and the second able to disperse to nearby bodies of water.

Aquatic organisms have developed an array of methods for obtaining oxygen. Some absorb it from the water; others must surface for it. Pygmy backswimmers are in the “diving bell” school—they poke up through the surface film, grab some air, stash it on their body, and then use it under water (this air reservoir is referred to as a physical gill). To this end, the ventral surface of the abdomen is covered by small, water repellant (hydrophobous) hairs, and air is captured and stored in this pelt. This load of air is what makes Pleids see the world belly-side-up—their bellies are more buoyant than their backs. The air-carrying mechanism is so efficient that their average dive time is 39 minutes, and they can adjust the size of their air load depending on what they’re doing and how warm the water is.

Pleids take good care of this very important interface. A European counterpart, Plea minutissima, crawls out of the water to groom it! It cleans microbes from its undersides using an antiseptic secretion produced by glands in the thorax—glands that in some terrestrial insects are scent/defensive glands. It’s called “secretion grooming,” and the bug leaves the water to do it because the stuff is somewhat water soluble, so it gets more bang for its buck on land. It leans to one side, making a tripod of the three “downhill” legs, and cleans itself with the other three. If it fails to do this, microbes will grow in the pubescence and oxygen capacity will plummet.

Pygmy backswimmers lay their eggs in the stems of water plants using a spurred structure at the end of the abdomen to pierce the stalk. They spend three weeks in the egg and another six to eight weeks becoming adults. When chilling water signals the end of fall, they overwinter as adults in a state of diapause (suspended animation) and can even survive a top-to-bottom freeze of their wetland, using stored oxygen.

Like the Notonectidae backswimmers, pygmy backswimmers communicate by stridulation (rubbing two body parts together), and they can hear via a sensory organ on the front of their face. They may signal others in their group by stridulation.

It’s May. Go outside.