The BugLady issues Bonus BOTW’s when something exciting comes up between regularly-scheduled episodes.

People get excited when pussy willows whisper the spring. The BugLady thinks it’s more fun to skulk among the pussy willows when they are actually blooming (the gray, fuzzy “bud” is the future female catkin), ogling the diversity of insects that come to visit. Willows are dioecious (separate house), bearing their male and female flowers on different plants. In general, the thicker, caterpillar-like flowers are future female catkins; the flowers with the long filaments are male. Pussy willow (Salix discolor), which is a prodigious pollen producer, is almost finished blooming, but other willow species are still in bud. Go check them out.

Remember that pollination is an accidental service performed by animals that visit a flower for another purpose altogether—to perch, to set up housekeeping, to browse, or to stalk the browsers. Mining bees and syrphid flies made up the majority of the insects that the BugLady saw, with flies (blow, flesh, and house) next. The BugLady saw a spring azure butterfly checking out the willow flowers, but she saw surprisingly few beetles. She was not able to identify everything she saw, but who cares!

If you put all of the people on the globe at one end of a teeter totter and all the ants on the other, our feet would be dangling. There are many kinds of ants with many lifestyles and many diets. 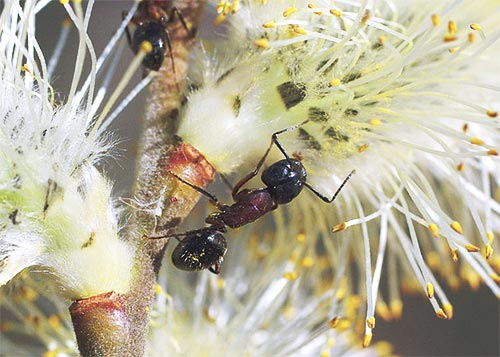 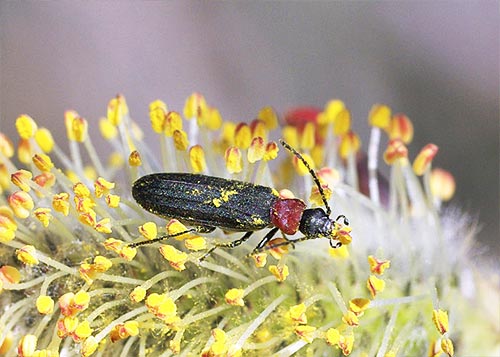 Some species of brown stinkbug are vegetarians, but the BugLady thinks that this is one of the predatory stinkbugs. The BugLady wonders if the heavy dusting of willow pollen works as an inadvertent disguise. 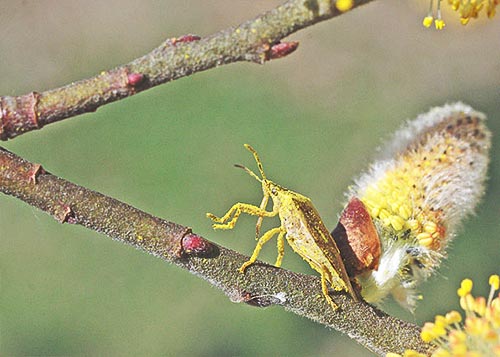 A sap beetle—although most sap beetles are consumers of rotting fruits and vegetables and fungi, some are found on flowers. 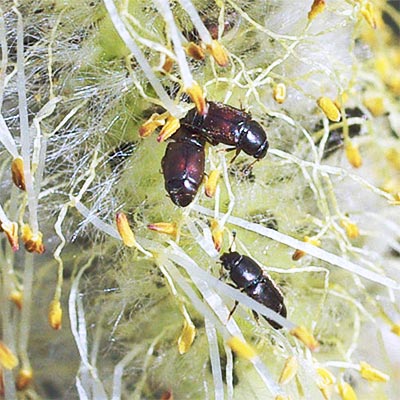 The Striped willow leaf beetle is in the huge leaf beetle family Chrysomelidae. It’s a small genus whose members (according to one source) mostly eat “weeds.” This one eats willow-parts. 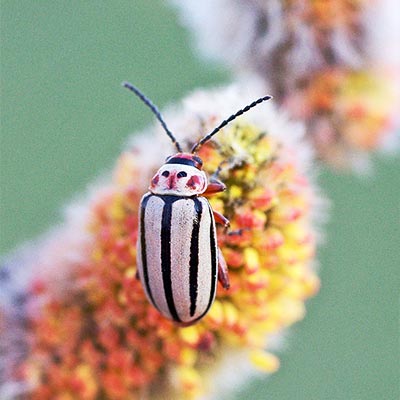 These members of the Blow fly family are listed as carrion feeders. Apparently, this fly was cleansing its palette. 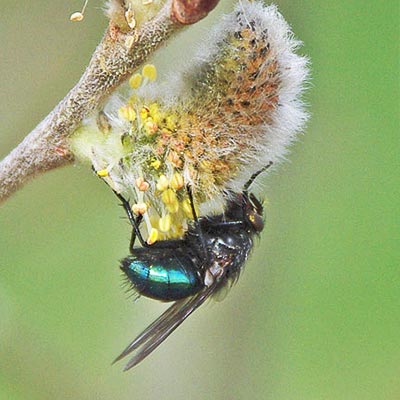 Another member of the Blow fly family, with a decidedly un-wholesome name, stared at the BugLady from a willow branch. 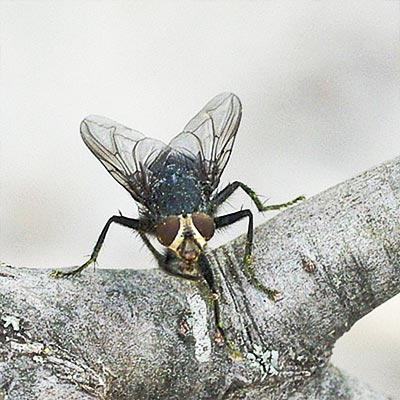 Honeybee—an important—and imported—pollinator, honeybees are on the landscape in late winter and early spring. Bees foraging for pollen near wetlands may warm up within the insulated comfort of a skunk cabbage spathe, which may be 30 degrees warmer than the ambient temperature. 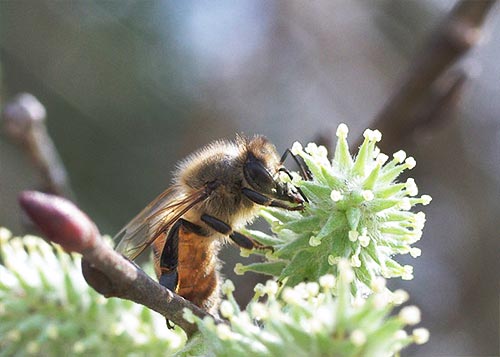 Mining bees are a mainly solitary bunch of bees; females stock brood cells with pollen and nectar for their emerging young. They are important native pollinators. 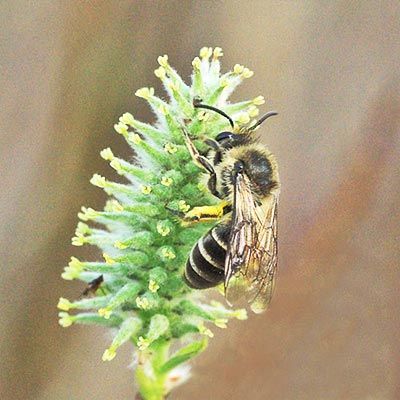 Sweat bees collect prodigious loads of pollen and transport it to their underground nests. Most are solitary; a few are marginally social. 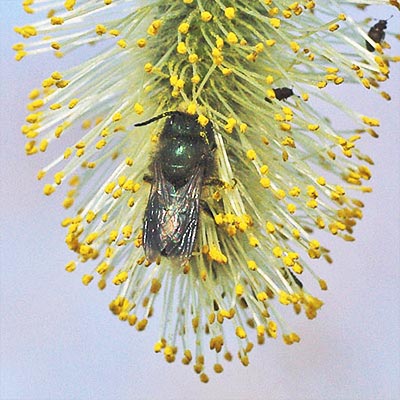 Syrphid/Hover/Flower flies are bee mimics that feed on nectar and pollen. 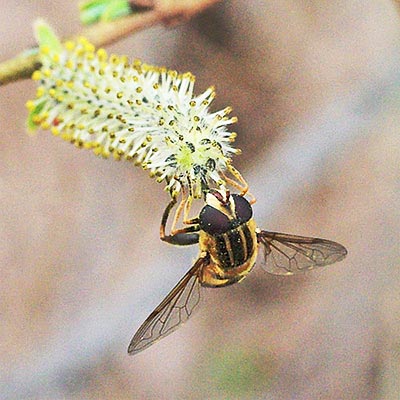 Tachinid flies have an ulterior motive. They lay eggs, or sometimes live young, on flowers so that their young may board another insect and become a parasitoid. The BugLady thought this ghost-colored tachinid was a bit creepy-looking. 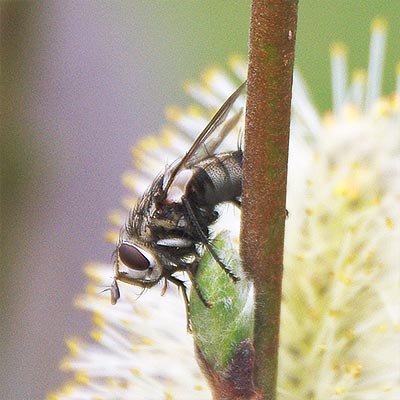 The BugLady is amazed at the antennae on this unknown wasp. 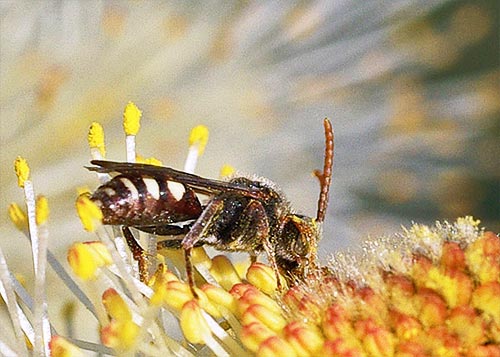 Negotiating the thicket of flower parts on the male flower must be a challenge. 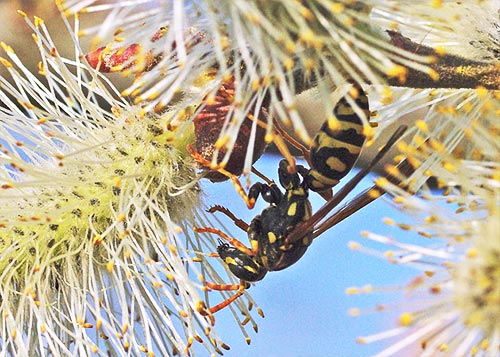