Protean Shield-backed Katydids evoke adjectives like “earthy” and “organic,” and “elemental” (along with lunker). This utilitarian katydid looks like it saw the dinosaurs, and maybe it did. Katydids (family Tettigoniidae, subfamily Tettigoniinae) are in the order Orthoptera (straight wings), i.e. grasshoppers, crickets, et al., and the Orthopterans have been around for 300+ million years or so, compared to dinosaurs’ 233 million years. Orthoperans survived the meteor strike 65 million years ago; dinosaurs did not.

As a group, Shield-backs are drab insects with very long antennae and a pronotum (a structure that covers part/all of the top of the thorax) that is flattened and flared like a shield. They stridulate (make noise, but not very musically) by rubbing together rough areas on their wings. If you make noise you need to hear noise, so they have “ears” (tympana) located on the front legs, near the “knee.” There are 123 species in North America, and they are a mostly-Western bunch, with about 10 species in the East. 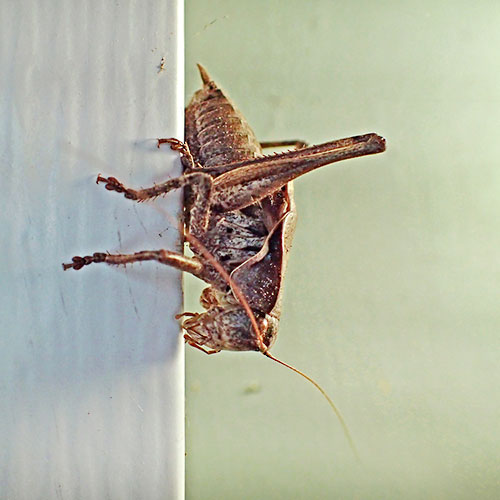 Surprising Shield-back Katydid Fact #1: Besides being called Shield-backed katydids, the subfamily Tettigoniinae is also known as the Predaceous katydids! In fact, lots of species of Orthopterans eat meat to some degree (Bambi is an omnivore, too, a story for a different day). Shield-backs do eat plants, and some are agricultural pests, but they are also scavengers on dead insects and are active predators, including on their brethren.

Surprising Shield-backed Katydid Fact #2: The Mormon crickets that threatened to ravage the Mormons’ crops in the summer of 1848 are actually an almost-3”-long, flightless species of Shield-backed katydid. According to Wikipedia, “Although flightless, the Mormon cricket is capable of traveling up to two kilometers a day in its swarming phase, during which it is a serious agricultural pest and traffic hazard.” In gratitude for their delivery, which came in the form of a big flock of California Gulls, the Mormons erected the Seagull Monument (more apologies to birders, everywhere) in Salt Lake City.

Surprising Shield-backed Katydid Fact #3: Expect to be nipped if you handle them (probably won’t break the skin). In England they are nicknamed “wart-biters.”

Protean Shield-backed Katydids, a.k.a. Short-legged Shield-bearers (Atlanticus testaceus) are found east of the Mississippi, from Kentucky/Virginia north around the Great Lakes and New England and into southern Canada. They used to be lumped with the Southern Protean Shieldback (Atlanticus pachymerus), a distinct species that is now believed to replace them in the South. They are found in open woodlands, woodland/grassland edges, fence rows, and brushy fields. Young nymphs seem to seek the sun more than adults do. 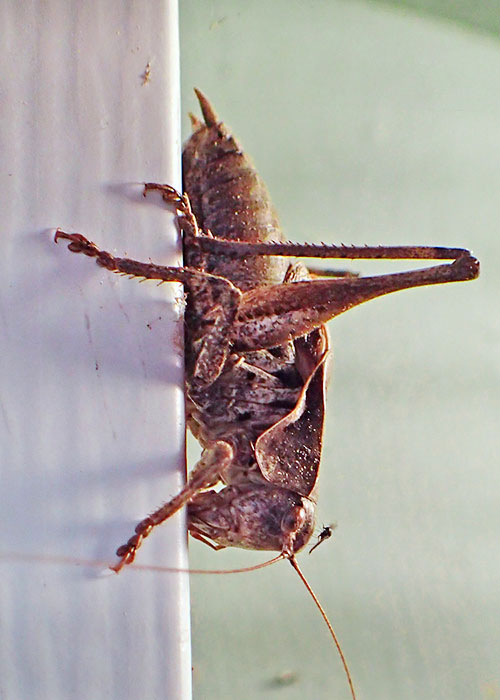 Based on their sheer bulk, it’s hard to imagine the chunky, inch-long PSBKs airborne. In fact, because of their reduced, almost vestigial wings, the only way they get off the ground is by climbing. Where do they go on foot? Researchers captured, marked and released 231 of them and found that they moved as far as 550 feet (average 120 feet) over a period of a few weeks, but their peregrinations seemed random.

These are the first katydids to mature and initiate a chorus in summer, and it is suspected that they may get a jump start by overwintering as nymphs, though some sources say that it is the egg that overwinters. They may sing from June through early fall, but their song is high-pitched and hard to pick out (click on the sonogram at the bottom).

Researcher S. K. Gangwere studied both the feeding habits and the circadian rhythms of PSBKs and discovered that they are “incompletely nocturnal”—that is, although they are most active from dusk until the “wee hours,” they are not completely at rest during the day. Gangwere paints a lovely picture of PSBKs moving about their landscapes, sometimes walking, sometimes hopping, twirling their antennae, resting under leaves and debris, and enjoying late-morning snacks. Males will gather at the base of plants and stridulate a bit in late afternoon.

At sunset, their activity level increasess, and they abandon the ground and climb into the vegetation. Males feed and stridulate, females feed, and she may mate if a male occupies the plant she’s on. Activity starts winding down after midnight (though, as Gangwere says, “they remain alert and their antennae continue to twirl”). They descend and tuck in well before dawn and remain still for six or seven hours. Elliot and Hershberger, in The Songs of Insects (a great book that comes with a CD) call shieldbacks “the linebackers of the insect world” and say that “Protean Shieldbacks are easy to approach, but their habitats are typically dense, and reaching a singer can be exceedingly difficult, unless you’re a professional contortionist.”

About feeding, Gangwere tells us that based on their mouthparts, they are adapted for a carnivorous lifestyle, but their diet probably consists more of plants, which are more readily available than animals. He calls them “a carnivore by preference but an omnivore by necessity.” 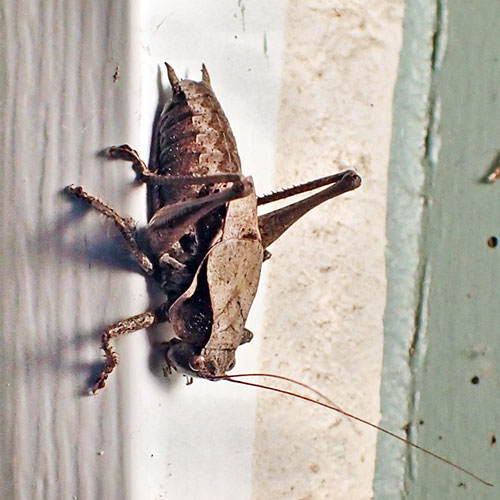 The individual pictured is a male—if it were a female, it would have an impressive, sword-like ovipositor aft.

Alert BugFans may have noticed that one of the BugLady’s nemesis bugs is sitting on the PSBK’s head in one shot. Thanks to Dan, an authentic entomologist, for the ID – a biting midge in the family Ceratopogonidae. And perhaps a future BOTW.

Cedarburg Bog is a rare habitat for southeastern Wisconsin