The BugLady has been busy, so here’s an enhanced version of an episode that appeared in 2009. New facts, new pictures.

Beetles belong in the Order Coleoptera (sheath-wings, a reference to the firm, front pair of wings – the elytra – that cover and protect the membranous second pair of flying wings). It’s a great system that protects the flying wings from predators and from environmental wear and tear, but it makes flying clumsy, indeed – the elytra have to go somewhere in flight, and that’s out to the side, like a mini bi-plane. 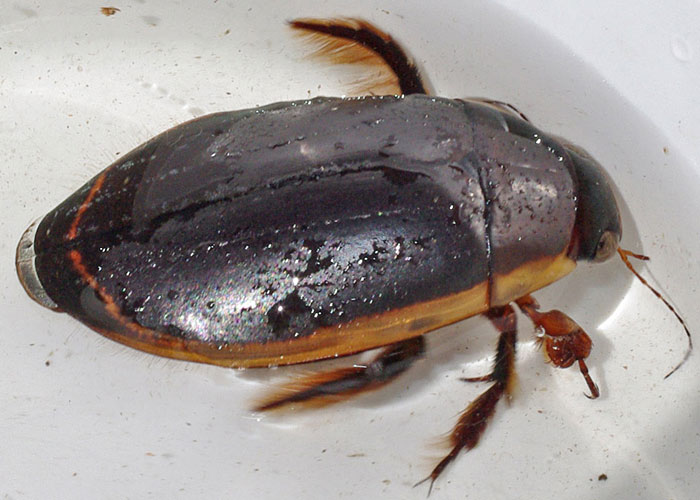 Beetles have been around for 225 million years, plus or minus, and more than a quarter of all species of living things that have been described are beetles. They outnumber vertebrate species 18 to 1. There are 24,000 beetle species in North America alone. According to Sue Hubbell in Broadsides from the Other Orders, when asked what his studies had taught him about the nature of his Creator, the great British biologist J.B.S. Haldane is said to have replied that “God has an inordinate fondness for beetles.”

Only about 4% of beetle species are aquatic, but if you do the math, that’s still a lot of beetles. Predaceous diving beetles are in the Family Dytiscidae (from the Greek for “able to dive”); with 4300 species worldwide (about 500 in North America), they are the largest family of aquatic beetles. Typically, they live in the shallow, still waters of lakes and ponds or in the pool areas of streams. 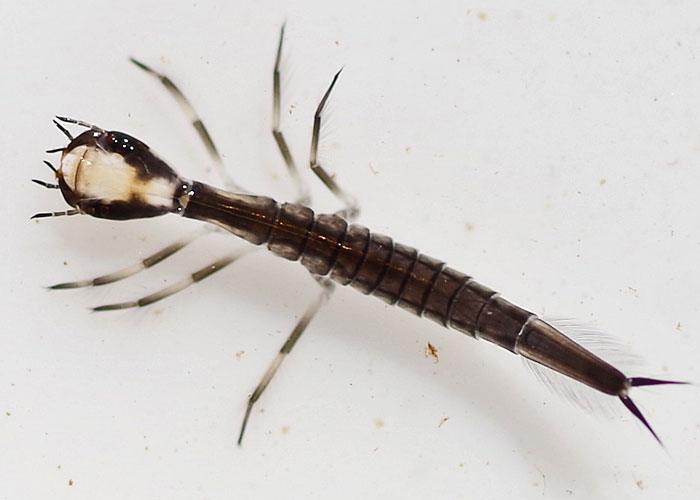 Dytiscids vary in color (red, to dark, to gold) and size (a big one may go an inch or more), but as a group, they are solid and oval and have slender antennae. Their powerful, hairy, oar-like back legs are perfect for swimming (they stroke with both simultaneously, rather than alternately), and they are further streamlined because they can tuck their other four legs into grooves as they swim. For a discussion of dytiscid eyesight, see this link

To tell a dytiscid from a sometimes-very-similar water scavenger beetle, Hydrophilidae, see this page.

While under water, dytiscids carry an air supply with them. Larvae take air into their bodies through spiracles (breathing pores) at the tip of their abdomen. Adults also back up to the surface film, but the air they capture is stored under the elytra, where their spiracles are. Carrying enough air to breathe, but not too much to submerge requires delicate manipulation. Dytiscids – along with some other families of aquatic beetles – haul up on shore from time to time to do what’s called secretion-grooming;” the anti-microbial substance produced by the pygidial gland helps keep the respiratory system under the elytra ship-shape. They can stay submerged for a long time (“long” being defined by one author as 10 minutes and by another as 36 hours!). 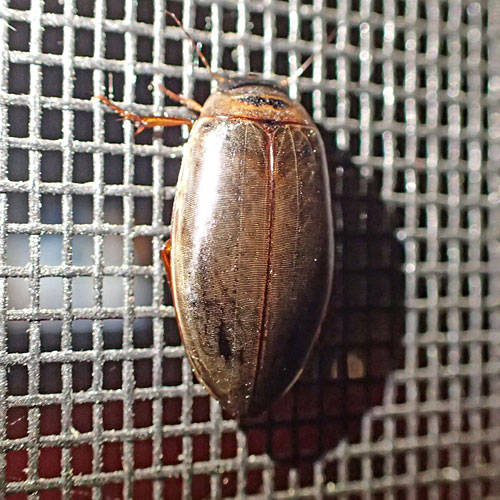 Dytiscids have an off-again-on-again relationship with water. Eggs are laid in the water and on/in aquatic plants, and even in shoreline muck, and when they hatch, larvae enter the water if they’re not already there. Mature larvae crawl out of the water to pupate in damp chambers they create on the shoreline. They emerge as adults in late summer and return to the water. Both larvae and adults may be found under the ice in winter. 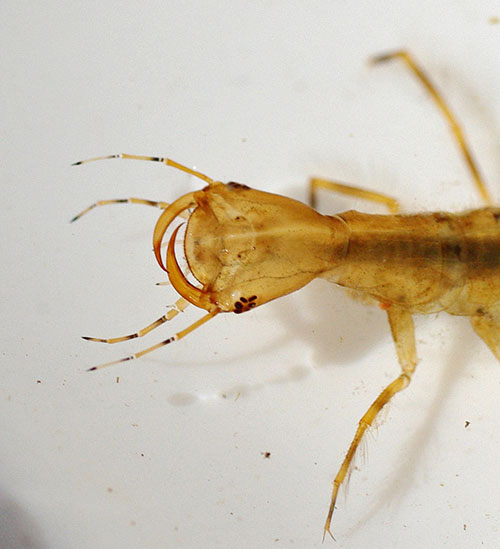 Adult predaceous diving beetles and their voracious and aptly-named offspring, water tigers (a BugLady favorite) are, as their names imply, carnivores. They have, let’s face it, gruesome eating habits. Water tigers, classed as piercer-predators,” are “lurkers” – catching their food by stealth, hanging motionless in the water until something edible swims past. They have sickle-shaped mouthparts that they use to grab their prey, and they inject a brown digestive juice through channels in the pincers into the hapless snail, small fish, tadpole, leech or fellow insect (including other water tigers). The liquid both kills and partially digests their prey, whose now-tenderized tissues the beetles extract. Here’s one of BugFan Linda’s amazing videos. Water tigers are often the top predator in their local food chain. 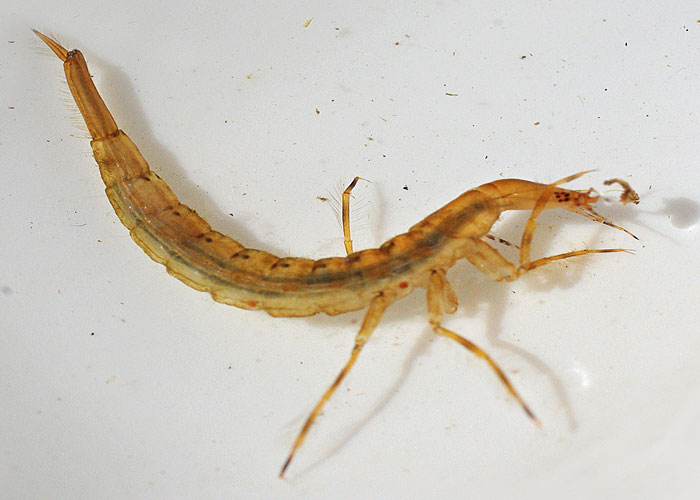 Adults are chewers; they hold their prey with their legs and tear pieces off with their mouth, and they will also feed on carrion. In both stages, they pursue prey larger than themselves. The BugLady is really surprised that there are not more horror movies featuring mutant aquatic insects. 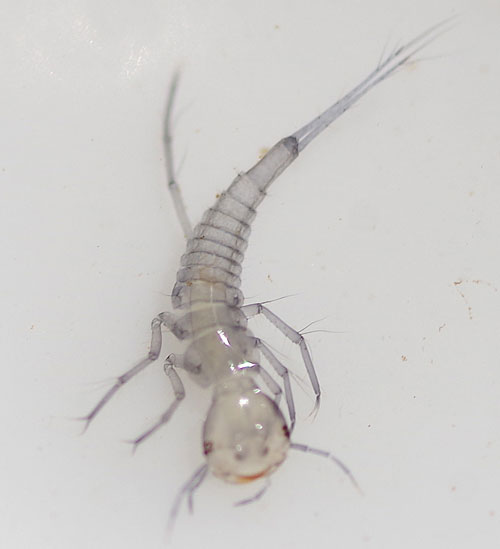 Dytiscids are competent flyers that take to the air at night (sometimes in groups). They may move around locally because of competition for food, to find a mate, or to escape a dying pond, and they are attracted by lights.

Water tigers are considered important players in mosquito control, but, as Ann Haven Morgan points out in her Field Book of Ponds and Streams, because dytiscid larvae share the sunny shallows with tadpoles, they undoubtedly have a major impact on amphibian populations. They are eaten by fish, raccoons, skunks, reptiles, amphibians, and some herons. 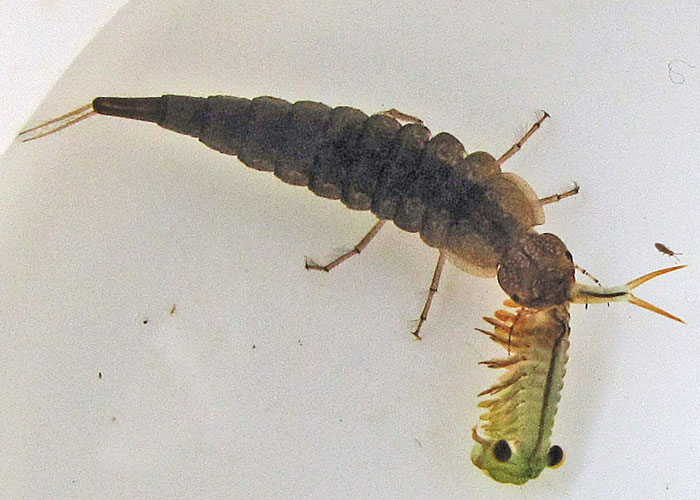 Interesting Dytiscid Fact #1: Species in the genus Cybister are edible and were enjoyed both in pre-settlement days and on tacos in present-day Mexico. They have been “farmed” for human consumption in various parts of Asia and have been used medicinally in China.

Interesting Dytiscid Fact #2: In a Cherokee Creation story, a water beetle came from the sky realm to find that the world was entirely water, with no place solid to rest. He dove down and brought up some mud, which expanded and became the earth.

Interesting Dytiscid Fact #3: There’s a genus of dytiscids that lives in deep, dark wells, and they are eyeless.

Interesting Dytiscid Fact #4: You can find on-line instructions on how to keep dytiscids as “pets” in fish tanks (they’re touted as “easier and cleaner than fish”), but co-habiting with small fish? Not recommended.

Interesting Dytiscid Fact #5: In some parts of Asia, dytiscids are used as the little ball in an aquatic version of roulette. Bets are won or lost based on which underwater spot a swimming dytiscid beetle stops on.

Hubbell tells us that, in recognition of their (and our) place in the great scheme of things, some South American Indians name as their Creator a very large beetle. J.B.S. Haldane would probably approve.