Last fall, as the BugLady headed into a cedar-tamarack swamp, she spied a lovely grasshopper that was sharing the boardwalk with her. She expects tree crickets in wetlands, and lots of katydids enjoy wetland edges, but wetland grasshoppers? The BugLady most assuredly has not developed an “eye” for Orthopterans (the grasshoppers, crickets, tree crickets, katydids, etc.), other than usually, frequently, sometimes being able to figure out what family she’s looking at, so she was stymied—the possible candidates she came up with all lived in sandy areas. What’s a BugLady to do? Ask an expert; turns out that this is a Pine Tree Spur-throat Grasshopper (Melanoplus punctulatus). Thanks, Professor B. 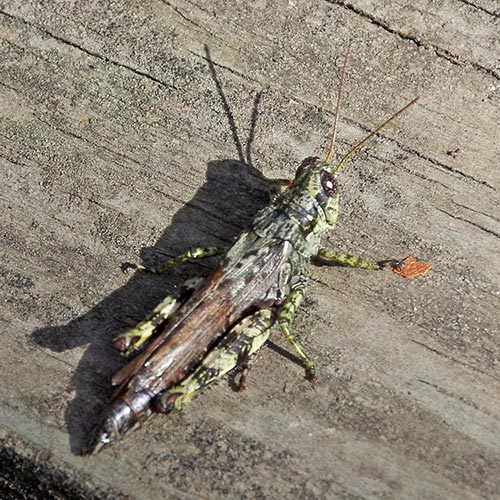 Along with some very familiar grasshoppers like the Red-legged, the Two-lined, and the Differential, the PTSTG is a member of the Short-horned Grasshopper family Acrididae and the genus Melanoplus. Short-horned grasshoppers have short “horns” (antennae), and legs designed for jumping; most have well-developed wings as well, and they have hearing organs on the sides of their first abdominal segment. They are variously called grasshoppers or locusts, terms that are often used interchangeably (Acrididae comes from the Greek “akris” meaning “locust”). There are 620 species in the family in North America (out of 8,000 worldwide) including 239 North American Melanoplus. They eat mostly plant material (with maybe a little scavenging on dead/almost-dead protein on the side), and some are major agricultural pests.

Melanoplus is in the Spur-throated grasshopper subfamily (Melanoplinae), so named because they have a protuberance/spur on the underneath side of the first thoracic segment at the base of the front pair of legs. In North America, Melanoplus grasshoppers are found in a wide variety of habitats from coast to coast, feeding on grasses and other vegetation. Identification of some is a slam-dunk, but others require both external and internal examination of male reproductive structures. The systematics of the genus is tumultuous—expect lumping and splitting and dissension.

The Pine Tree Spur-throated Grassshopper enjoys a number of other equally descriptive common names like the Grizzly Locust, and the Marbled, Grizzled, and Griseous (Medieval Latin for white/gray mottled with black/gray/brown) Grasshopper. There’s quite a lot of variation in color, from gray to toasty brown to green; females, which are larger than males, may grow close to two inches long. Bugguide considers PTSTGs “One of the few members of its genus that is easy to recognize.” For a glimpse at the family album, here’s a male, (they’re described as having distinctive club-like/boot-shaped cerci) a female, a female ovipositing on a boardwalk, and a wee nymph.

The PTSTG may be found in decidedly un-grasshopper-like habitat over a wide swath of central and eastern North America, but it is considered very uncommon. In 1897, Samuel Scudder wrote in his Revision of the orthopteran group Melanopli (Acridiidae): with special reference to North American forms, “Brunner reports it from oak groves and Smith on cranberry bogs, but Bentenmueller has found that it lives on pine trees. Blatchly found it in the depths of a tamarack swamp, and says it is not an active insect, ‘usually, after one or two short leaps, squatting close to the earth and seemingly depending upon the close similarity of its hues to the grayish lichens around it to escape detection.’ Others have since found it in coniferous trees, and these are, apparently, its proper station.” 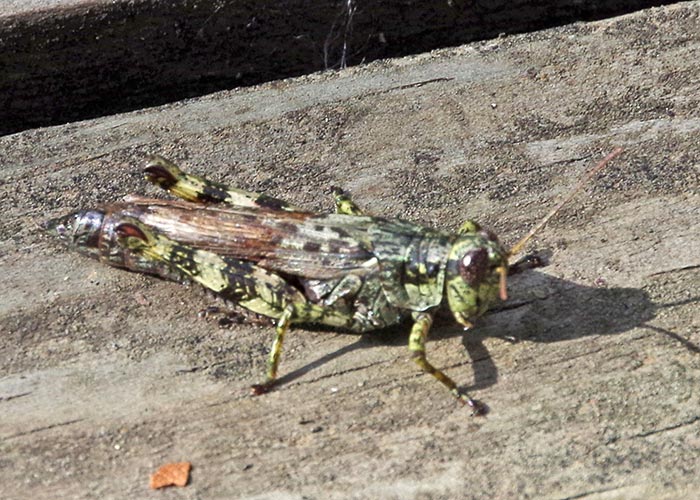 According to bugguide.net, “Traditionally this species is considered rare, but it is one of the most frequently photographed grasshoppers, and has as wide distribution. Perhaps this is because of habitat preferences; entomologists looking for grasshoppers rarely see it because it lives mostly in the trees, but people with cameras often find them in such places (or on the sides of their houses or wood porches and stoops).” Its rank in Wisconsin is “S2?” (S2 means “Imperiled in Wisconsin because of rarity”) and its status is SC/N (Special Concern; no laws regulating use, possession, or harvesting). For more about Wisconsin’s rare, endangered and threatened species, check the Wisconsin Natural Heritage Inventory (NHI) website.

A male Melanoplus’ approach to courtship is more physical than auditory. He doesn’t stridulate (make noise by friction), he simply grabs a female and introduces himself by shaking his legs in a characteristic way. If she is from a different species, she won’t recognize his “language” and will rebuff him. Females oviposit into holes that they drill with their abdomens; the female PTSTG deposits her eggs in soft wood, stumps, and crevices in both deciduous and coniferous trees. The PTSTG overwinters in the egg stage; nymphs appear in late spring and mature by early summer. The grasshopper lives in trees and feeds there on needles and deciduous leaves.

The insects (and other living things) that the BugLady researches have common names (usually), and a scientific name made up of a genus name (very roughly equivalent to human surnames—it shows a relationship to similar organisms) and a species name that in combination with the genus name, distinguishes this species from all others. In scientific literature, the genus and species names are followed by an “author name” or initial that typically refers to the person who described the species, sometimes centuries ago (though the ground rules can be way more complicated than that). So, the PTSTG’s complete designation is Melanoplus punctulatus (Scudder 1863). Here’s the first of an occasional series of sidebars titled “Who Were Those Guys??”—brief biographies of the scientists on whose shoulders we stand.

Samuel Hubbard Scudder (1837–1911) was an American entomologist and paleontologist who published almost 800 books and papers between 1858 and 1902. Topics ranged from insects (biology, anatomy, embryology, songs, behavior, distribution, and classification) to paleobiogeography, geology, geography, evolution, molluscs, and more. A complete list of his papers can be found at the end of an reverent tribute written by Alfred G. Mayor and published by the National Academy of Sciences in 1919.

The two-volume Nomenclator zoologicus (1882-84) catalogued all the family and genus names being used in zoology at the time; in 1888-89 he published the three volume Butterflies of the Eastern United States and Canada with special reference to New England (he is much-cited on the marvelous butterflies of Massachusetts site). He named 1,144 species of fossil insects, gave common names to 77 species of butterflies, and described 630 species of Orthopterans. He was also an expert on the cockroaches and mantises.

According to Mayor, “almost our whole accurate knowledge of American orthoptera and of American fossil insects is due to Scudder’s painstaking examination and description of the most minute details of structure exhibited by these forms.” About the butterfly books, Mayor says that Scudder “is perhaps the only man of science in America who could write a deeply technical work upon Lepidoptera and at the same time without incongruity crowd the volumes with quotations from poetry and with popular excursuses upon all manner of fascinating subjects related to New England and its butterflies.”

The BugLady first heard of Scudder years ago in a lovely collection of biographical essays by John McCullough called Brave Companions. The entry about Scudder referenced an essay called The Student, the Fish, and Agassiz that he wrote in 1874 about his initial experience with Professor Louis Agassiz at Harvard University.

Scudder was diagnosed with Parkinson’s disease 1897. Mayor tells a revealing story about Scudder’s mental determination during his long decline, “That remarkable interest in system and fascination for detail that had characterized his active life still survived in these passive years, for at his request Miss Blatchford read to him every word of the original folio edition of Dr. Johnson’s Dictionary, including the preface and the definition of each and every word; almost the entire time between January 12 and October 24, 1905, being consumed in this manner.”