The BugLady recently read an article by Door County’s Roy Lukes in which he said that “a lot of caterpillars are considerably more interesting and easier to study and admire than the adult insects into which they will eventually develop.” Easier to photograph, too. Caterpillars are truly amazing creatures with often-complex biographies.

This finger-sized (3” to 4”) guy/gal is certainly spectacular. The Pandorus Sphinx (PS) starts out life as a green caterpillar with a long, curved “caudal horn/tail” on its caboose. Caterpillars of fellow sphinx moths like the tomato hornworm are also decorated astern with prominent, but harmless, horns (check out “Pandorus Sphinx” and “What is this Pink Caterpillar?”—the tailed PS caterpillar reminds the BugLady of that “X-Files” episode about a rash of babies born with vestigial tails). At its third molt, halfway through caterpillar-hood, the tail/horn shrinks away and is replaced by a lenticular (lentil-shaped), eyed button. The caterpillar itself may change color, especially as it approaches pupation in its last/fifth instar, (an instar is the eating stage between two molting stages; PSs tend to spend four or five days in each instar). Green, orange, pink, cinnamon, chocolate and black PS caterpillars have been observed.

Whoever concocted the old (and often true) lepidopterists’ rule that “the homelier the caterpillar the prettier the butterfly/moth, and vice-versa” wasn’t looking at the sphinxes in general or at this species in particular. Sphinx moths (family Sphingidae) have wings with subtle patterns or dramatic color blocks. Their hairy bodies are spindle-shaped—tapered fore and aft. Their eyes are large, and their long proboscis designed to fit tube-shaped flowers. They lack “ears” (tympana), but hearing is less important for a silent insect that communicates by scent. They are strong flyers whose narrow, pointed forewings are often much larger than their hind wings. Some, like the Cinnamon Clearwing moth, fly during the day. Others fly in late afternoon or in the evening.

The Pandorus/Pandora Sphinx moth (Eumorpha pandorus), formerly called the Satellite Sphinx, looks similar to the Hog Sphinx pictured. The PS is larger than the Hog Sphinx (females are a bit larger than males, with wingspreads up to 4 ½”), its hind wings are patterned, and like the Hog Sphinx, some individuals have a mossy green tinge. Bugguide.net calls it “An extra-spectacular sphinx moth.” PSs occupy North America from south Texas to Wisconsin to Nova Scotia to south Florida. They are found at dawn and dusk along forest and river edges and vineyards where their caterpillars’ food plants grow. Adults nectar on (and pollinate) bouncing bet, white campion and petunias. 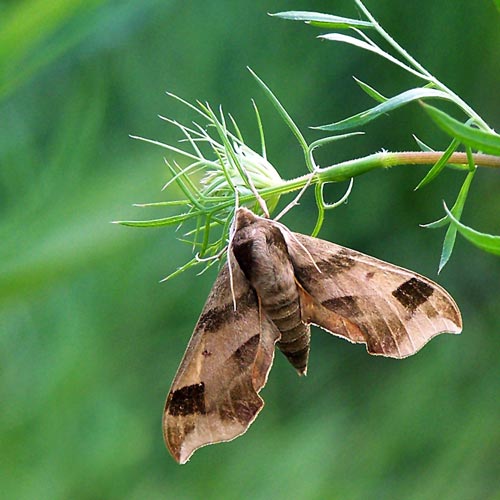 A female PS initiates courtship by releasing chemicals (perfumes) called pheromones. As one silkmoth website put it, “Females call at night, and males fly into the wind to pick up and track the pheromone plume.” Eggs are laid, one-at-a-time, on plants on the short list of larval foods, all in the grape family—grape, Virginia Creeper and Ampelopsis (peppervine). PSs sometimes cause minor problems in vineyards, but control methods are usually unnecessary (though on a related search, the BugLady found a recipe for lightly fried tomato hornworms).

PS caterpillars are dedicated leaf-eaters, hanging out on the undersides of leaves—literally, with tiny hooks called “crochets” on their prolegs. Caterpillars have an abundance of appendages on their lower surface. The front few pairs of jointed legs on the thoracic segments are called the thoracic/true legs. Prolegs are located in the mid-to-rear abdominal segments of the caterpillar. They aren’t jointed, have minimal muscles and operate by hydraulic pressure.

PS caterpillars have a habit of tucking their front two segments into the third segment when they are alert or are snoozing, resulting in a swollen, blunt-looking front end; this “sphinx-like” posture gives sphinx moths their name. Alarmed caterpillars have another (sticky) tactic in their arsenal against ants and the many parasites/parasitoids that prey on them—regurgitation.

There are two generations of PSs per summer here in God’s Country, three in Missouri and four in Louisiana. PSs pupate in cells/chambers that the caterpillars dig in the ground. The early generation(s) pupate only for a few weeks, and these adults emerge to fly in the same summer. The final generation of the season overwinters as pupae in a stage of dormancy called diapause. These fifth-instar caterpillars are often seen as they mosey around, searching for a good spot to pupate. As in other sphinx moth pupae, lines on the outside of the PS pupal case mark where some adult features will be. Some sphinx pupae have a curved, external “jug handle,” inside of which the long proboscis will form. When the adult is ready to emerge, it wriggles its pupal case up to the soil surface.

Finally, the BugLady has “arrived.” In the “banned books” section. Several BugFans receive BOTW at their work email (at the same company). Their corporate IT filter blocked last week’s post about Leaf-footed bugs because it “may contain inappropriate (offensive) content.” The BugLady can only assume that the electronic scanning/filtering program was paying attention during those Gender Sensitivity In-Services and was alarmed by an email that contained both a contemporary word for an unmarried woman (a la the TV reality show) and a scientific term for an immature insect (the BugLady is cagily trying to steer clear of what she thinks were the trigger words in order to avoid further rejection).