Aphids are strange and complicated and remarkably successful little critters that carry on a variety of lifestyles worldwide. They were in the order formerly known as Homoptera, which has been folded into the more comprehensive order Hemiptera (where aphids reside in the suborder Sternorrhyncha). The family Aphididae is made up of a bunch of small, soft-bodied, pear-shaped, plant-juice-sucking insects with compound eyes at the front end and twin “tail pipes” (called cornicles) to the rear. 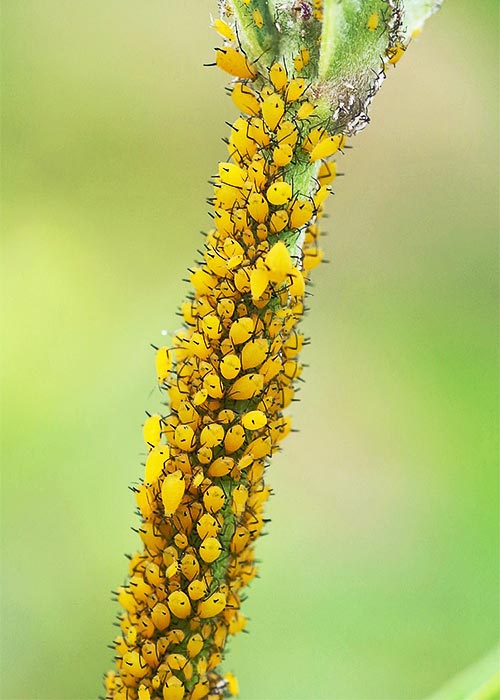 Aphids feed by puncturing plant stems (woody or herbaceous, depending on the species) and guzzling the juices. The phloem in a plant’s vascular system is “under pressure”, so once an aphid pierces the stem, the liquid floods into their siphons, and bacteria in their guts help them process it. Aphids secrete honeydew, a sweet substance that comes out the other end of their alimentary canal and is prized by ants, which collect it directly by “milking” the aphids, and by small bees and wasps, which eat it off of the leaves it falls on.

People don’t like aphids much. An unsightly build-up of honeydew on leaves encourages the growth of an unsightly sooty fungus; a crowd of feeding aphids may stunt, shrivel or deform plant parts; they may transmit viruses to their host plants; and discovering a congregation of aphids is not for the easily queasy. 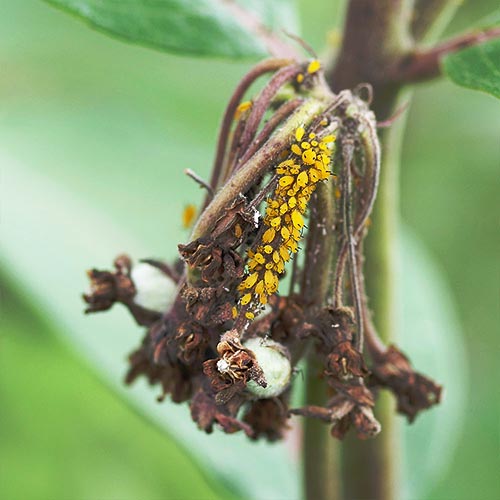 Quick detour into “Aphids in Literature”—according to Wikipedia, honeydew is mentioned in Norse and Greek mythology (“ash tree nymphs nursed the infant Zeus”) and is a possible interpretation of the manna in the desert in the Hebrew Bible.

The star of today’s show is the Oleander Aphid (Aphis nerii) (nerii comes from the scientific name for the oleander shrub). It’s also called the Milkweed aphid, a common name it shares with Aphis asclepiadis (the BugLady has seen the pale yellow A. asclepiadis on the undersides of milkweed leaves). The OA’s native haunts are the Mediterranean region (so are the Oleander’s), but now it enjoys warm locations everywhere. How does a 2 ½ mm, mostly wingless animal get from Continent A to Continent B? Wind is a big factor—winged aphids (more about that in a minute) are undoubtedly ingredients in that vast collection of airborne invertebrates called aeroplankton (it has been estimated that a mile-square column of air extending from 20 to 500 feet off the ground contains 32 million arthropods, the majority of which are spiders). Their second vector of dispersal is, of course, the ever-obliging human race, with its continuous need for more and more exotic plantings. 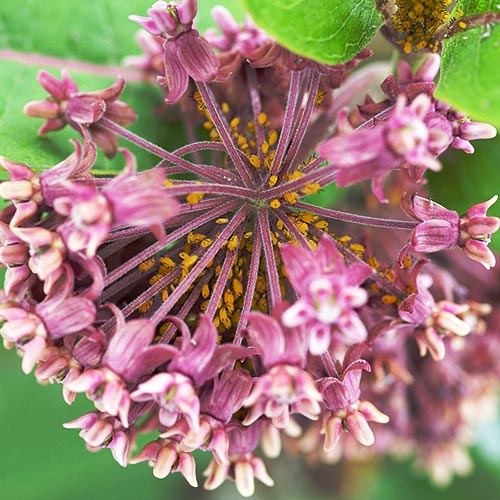 OAs are found everywhere that their host plants grow, and within certain constraints, they are generalist feeders. Oleander, a member of the dogbane family, is found throughout the southern US, but in this neck of the woods, OAs mainly grow on milkweeds. While many species of aphids are muted in color, there’s nothing drab about OAs. They get away with it, of course, because they are feeding on milkweed. The poisons they ingest (cardenolides, or cardiac glycosides) are sequestered within their bodies, and their bright color (aposematic coloration) dares predators to “Come and get it!” And the predators do come—OAs are eaten by spiders, syrphid fly and ladybug larvae, and lacewings, and parasitic wasps deposit eggs in them, but the meal may come with an unexpected price tag.

For small, unarmored insects, OAs are not without defenses. They may simply drop off of a plant, and they have been seen kicking at parasitic wasps. Not only do they store glycosides, they can exude the chemical from their cornicles in a substance called cornicle wax. One bite of the bitter, toxic stuff makes a predator back off and wipe vigorously at its mouth. Researchers observed that larval lacewings that do feed on OAs may not mature normally, that ladybug larvae may have deformed wings as adults, and that afflicted spiders spin aberrant webs. 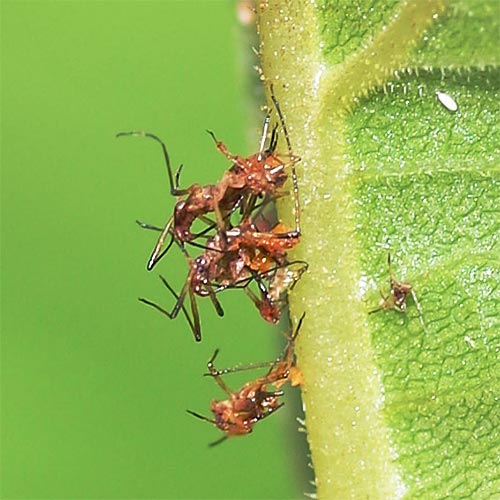 For most of the summer, female aphids give birth by parthenogenesis (virgin birth) to live female nymphs which give birth to more live, female nymphs, and the multiple generations, having been produced asexually, are clones of Mom. It’s a great way to build up a large population in a hurry (it’s a great way to take over the world). Many species produce male offspring in fall, and the result of the subsequent sexual reproduction is eggs that overwinter (and produce females in spring).

An OA Mystery: OAs in the southern U.S. can overwinter as adults (the winter of 2013-14 has surely been a challenge for them), but that’s impossible in Wisconsin, whose OA populations vary from year to year. As far as anyone knows, neither eggs nor male OAs occur in the wild (though that’s not totally impossible. Another hypothesis is that they have a second host. Or they could recolonize God’s Country each year. Or…