The (outdoor) bug season is winding down (the BugLady has been Mushroom/LichenLady, of late), but there are still some insects to be found. She was excited to see a pair of walkingsticks recently, so here’s an updated BOTW from the fall of 2008 (new words, new pictures). Yes, walkingstick insect is a single word; a walking stick helps you balance when you hike.

Like mantises, walkingsticks were formerly classified in the grasshopper order Orthoptera; and, like mantises, walkingsticks are now in their own Order, the Stick Insects or Phasmatodea (from the Greek phasma meaning apparition or phantom). Because of their unique shapes and habits, they’ve collected common names like Devil’s darning needle, Devil’s/Witch’s riding horse, and prairie alligator. There are about 3,000 species worldwide, and they’re most diverse in the tropics. The Lord Howe Island stick insect, of previous BOTW fame, is a walkingstick.

Walkingsticks are generally green or brown (a few species can change color slowly, and there’s one in Madagascar that’s bright blue). The largest North American species can grow to a whopping 7”, and one tropical species may reach 14” (22” with antennae and front legs out-stretched). Northern walkingsticks (Diapheromera femorata), the only species in northern North America, is 3 ½” to 4” in length (males tend to be smaller). Most species in the U.S. are wingless; insect legs (and wings) are attached to its middle section (thorax), and a walkingstick’s thorax comprises an impressive one-half of its body length. A walkingstick that loses one of those spectacular legs—they may sacrifice a leg if a predator grabs it—may be able to regenerate it, completely or partially, depending on species and age. The abdomen is tipped with a pair of cerci (claspers) that are sensory.

Walkingsticks are terrestrial—if you see a similar critter in the water, it’s an (unrelated) water scorpion.

Shy and nocturnal, they are most active between 9 PM and 3 AM, and, says one study, they have “screening pigments” in their eyes that act to block excessive light of daytime. They graze on the leaves of a variety of deciduous forest trees, starting on low shrubbery as tiny nymphs and moving to mature trees as adults. During a population boom, they can do some serious damage. The BugLady can’t picture walkingsticks occurring in numbers sufficient to defoliate a tree, since she rarely sees more than two or three a year. Damage is localized, geographically, simply because the wingless walkingsticks don’t cover a lot of ground.

There are two reasons for camouflage, to hide and to hunt, and walkingsticks are world-class hiders that practice crypsis—camouflage plus mimicry. In addition to their physical appearance, walkingsticks use “behavioral camouflage;” during the day they extend their front and rear legs to the fore and aft of their body and remain motionless or sway slightly in the breeze for hours. 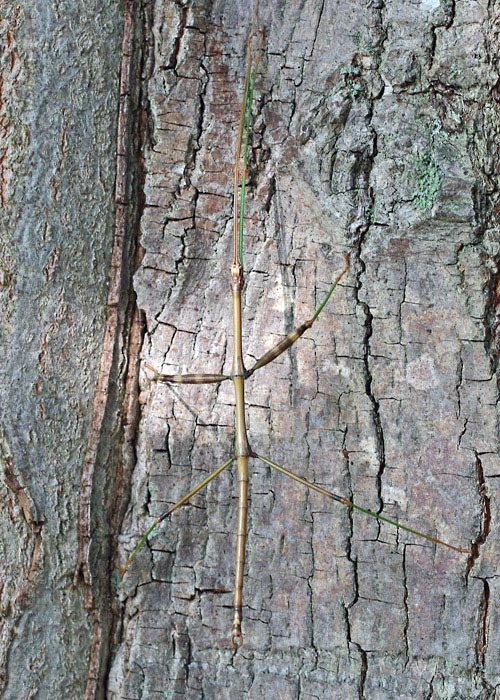 Northern walkingsticks reproduce when they mature in late summer/early fall. As females negotiate the treetops in early autumn, they drop eggs (about 150) that free-fall to the ground and overwinter in the leaf litter. Their eggs mimic seeds, which may offer some protection from parasites. These will hatch in spring—or in the one after that—although if the winter and spring have been especially dry, the egg will not soften enough to allow the nymph to emerge. According to the Forest Service’s Forest Insect and Disease Leaflet #82, “As the cycle in the north is 2 years long, even-year and odd-year broods have developed. In some localities both broods are nearly equal in numbers, but in others they are unequal. For instance, in Minnesota even years are “off years,” while in Wisconsin and Michigan odd years are “off years.”

Metamorphosis is Simple/Incomplete—the newly-hatched nymphs resemble the finished product, simply growing and adding adult parts as they go along. Nymphs start out green, and get twiggier-looking in color and texture as they molt, hanging on to the underside of a leaf. Adult males tend to be brown, and females green and brown. Northern walkingsticks sometimes practice parthenogenesis (virgin birth), in which case their offspring are all females. 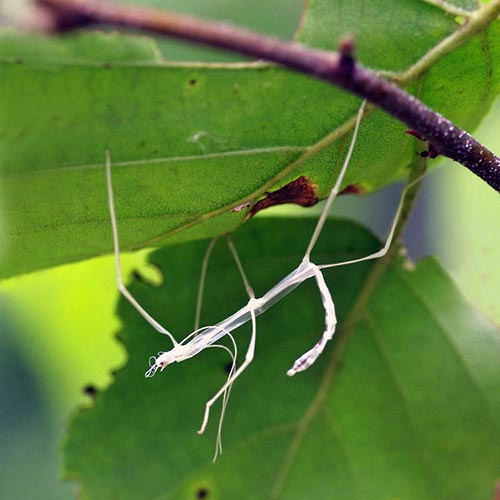 Like mantises, walkingsticks are interesting, but high-maintenance, pets, requiring careful handling and a variety of fresh tree leaves daily. They’ve been known to live a year in captivity.

The BugLady was casting about for one final interesting factoid with which to finish this account, and she discovered two, in The Handy Bug Answer Book by Dr. Gilbert Waldbauer:

First, parental care is necessarily absent in a species where Mom drops her eggs to the ground from great heights, and the forest floor is fraught with dangers for the hapless eggs, including from cuckoo wasps that search for walkingstick eggs to parasitize. Because a portion of the outside of each egg is edible, ants carry the eggs below-ground to their nests. Their nibbling does not damage the interior of the egg, and when the tiny (a few millimeters long) walkingsticks hatch, they are allowed to exit the ant hill.

[OK – extra credit time: the tasty area on a walkingstick egg is called a capitulum. The capitulum on an insect egg is, wait for it, mimicking a similar tasty and nutritious area called an elaiosome on a plant seed that depends on ants for distribution. Ants haul the seeds back to their nest, eat the edible part, and toss the rest into their waste heap, which happens to be a great growing medium. Seed dispersal by ants is called myrmecochory, and plants and animals that enjoy a partnership with ants are called myrmecophiles.]

The second factoid includes some “adult content,” and the BugLady requests that you cover the eyes of impressionable children, if you know any. Fidelity is rare in the insect world, and there are a number of strategies that males of some groups may use to ensure that the object of their affections does not court another. Some male walkingsticks are known to, ah, remain “in the embrace” of a female long after sharing bodily fluids with her, becoming what Waldbauer calls “living chastity belts” [and from which convenient position, males will also fight off rival males]. In fact, the, um, endurance record for copulation for the insect world seems to be held by walkingsticks. 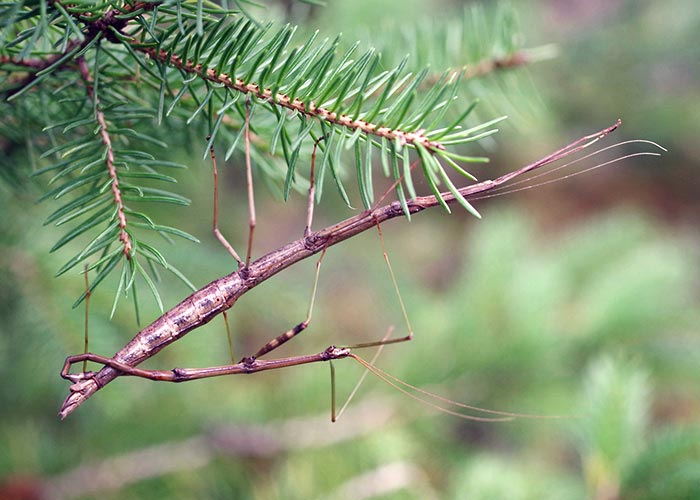 One member of the genus Diapheromera hangs on for 136 hours; another walkingstick species stays coupled for 3 weeks.