Back in 2010, the BugLady wrote about the Swamp Metalmark, a lovely little butterfly that is fading from the Wisconsin scene and from other parts of its range in the Midwest. When she was in southern Ohio in June, she photographed a Northern Metalmark (Calephelis borealis). Full disclosure: Northern Metalmarks are not found here; they occupy widely spaced pockets in a band from New Jersey/Connecticut on the east to southern Missouri/eastern Oklahoma on the west, but they don’t occur in Wisconsin. 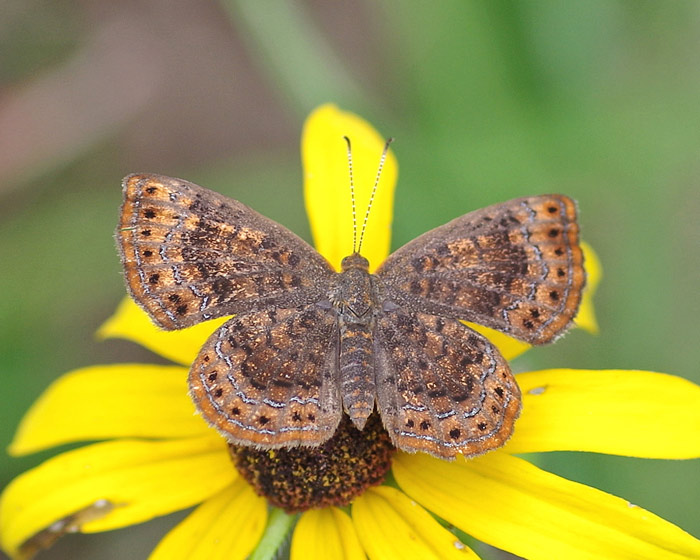 Metalmarks, family Riodinidae, are a mostly New World, mostly tropical bunch that includes about 1,100 species (20 north of the Rio Grande; some just barely). They are smallish butterflies (Northern Metalmarks have a wingspan of about 1 ¼”) that typically perch with their wings spread wide, but that often fly into vegetation and perch, moth-like, on the undersides of leaves (makes them hard to census). Females walk about on six legs, but males use only four – each of their front legs is greatly reduced and modified into a spine. Males scan the airways for females from a perch, rather than on the wing.

Like many other metalmark species, Northern Metalmarks are subtly beautiful, with patterns of silver/metal/rust on dark wings. They look very similar to Swamp Metalmarks, but habitat requirements separate them in areas where their ranges overlap. Some species in the Southwest and the tropics are unapologetically spectacular (such as the Apodemia virgulti, Melanis pixe, and Lasaia sula). The tips of a NM male’s forewings are more rounded than are those of the female, and the undersides of his wings look pretty different than the upper sides. 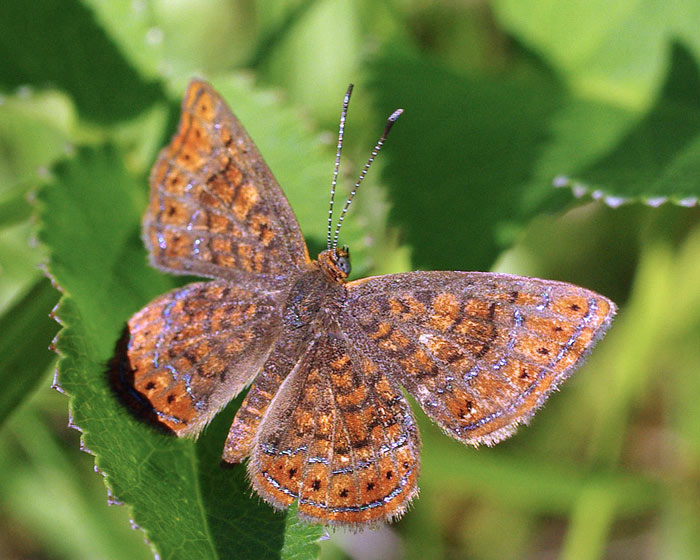 Like the Swamp Metalmark (pictured above), the Northern Metalmark has some very particular habitat needs, and like the Swamp Metalmark, this and other factors have put it on the threatened/endangered list in states where it occurs. Another habitat specialist, the Lange’s Metalmark, is also endangered, (for an unusually-flowery-for-a-government-account of its revival efforts, see the U.S. Fish and Wildlife Service Field Notes).

NMs like open/dappled stream edges and meadows near woodlands with shale, limestone or serpentine rock barrens or outcroppings close by. These are very sedentary butterflies, so the caterpillar food plants (two species of ragwort and one of fleabane) and adult nectaring plants must grow in close proximity.

Females place eggs, one at a time, on the underside of a host leaf, and the caterpillars, half-grown by the advent of cold weather, overwinter under the basal leaves of the host plant or burrow into the duff/soil, to emerge and continue their development in spring (for a picture of the caterpillar, scroll to page 75). Caterpillars form a chrysalis in spring, attached by a silk “button” to the underside of a host plant’s leaf.

Their historical range is believed to have been much larger. Multiple factors have led to their decline, and it’s mostly a familiar chorus.

Legislating an environmental conscience results in resistance and resentment. Can we educate for one? At the very least we should remember, as Aldo Leopold noted, that “To keep every cog and wheel is the first precaution of intelligent tinkering.” See “The Case of the Disappearing Butterfly”.

[Editorial Aside: The BugLady gets solicitations all the time with pictures of the charismatic megafauna – gorillas, elephants, cheetahs, grizzlies, polar bears – and, yes, pandas. Frankly, those animals seem almost fantastical to her – seeing them in the wild is not a part of her experience bank and is unlikely ever to be. The groups for whom they are the poster children would have more success with her if they pictured the small, the winged, the six-legged, and the local. There are four species of Federally Endangered birds in Wisconsin, three mammals, a reptile, five mussels (decidedly uncharismatic, those mussels), and four insect species. The State Endangered and Threatened lists include five mammals, seven reptiles, 24 birds, 19 mussels, and 23 insects. They need a bake sale, too.]

Apparently, the BugLady is starting out the New Year a little cranky.

And now for Something a Little Different V - To Sleep, Perchance to Dream