Many autumns ago, the BugLady was out in the field with BugFan Mary and some school kids, catching grasshoppers, and Mary said, “The grasshoppers are dead, they just don’t know it yet.” And while it is true that the lives of most adult insects end by the first hard frosts, the Grim Reaper may be assisted in those waning days by nematodes.

Fast Forward to a recent spring, when the BugLady was photographing critters at the Ephemeral Pond and this wee beastie swam past her lens. It’s been quite a while since we’ve ventured away from the world of the Six-legged. Nematodes (and the BugLady has her fingers crossed that this is, indeed, a nematode) are not on many people’s radar. But, “Nematodes are probably the commonest multicellular organism that you’ve never heard of and have hardly ever seen…” (Platt, 1994).

They’re not insects or spiders or millipedes or anything with legs. Not earthworms or leeches or anything with segments. They belong to the phylum Nematoda/Nemata (from the Ancient Greek nema, for thread and eides for species)—they are Roundworms. Their classification has ever been a work in progress; they have been a Family and then an Order and are now their own Phylum (from which the superficially similar Horsehair worms, of previous BOTW fame, have been evicted). There are many known species of nematodes and many more to discover, and we don’t know the biographies of most of them—even, in some cases, enough to know if they are properly placed in the Phylum. And, of course, they have their own website.

Nematodes is a gigantic topic—people get PhD’s in Nematodes—so this is necessarily the introductory course. Put up your feet—it’s a story that takes some telling.

Just How Many Nematodes Are Out There?

Huge numbers of species and well-nigh uncountable numbers of individuals, that’s how many. By some reckonings, four out of every five multicellular animals on the planet are nematodes (that’s individuals, not species). The more-than-30,000 known species may jump to a million by the time the taxonomic dust settles.

Nematodes seem to inspire in people a need for over-the-top imagery. In 1914 Nathan Cobb calculated that “if the nematodes resident in a single acre of soil near San Antonio, Texas, USA, were to proceed in head-to-tail procession to Washington D.C., some 2000 miles away, the first nematode would reach Washington before the rear of the procession left San Antonio!”

According to darwingsgalapagos.com, “A square meter of mud from an inshore area near the coast of Holland was measured to contain over 4 million nematodes. Good farm soil as well as containing a large number of earthworms can also contain from several hundred million to several billion nematodes per acre. A single decomposing apple on an orchard floor has had 90,000 nematodes counted in it of several species and a single decomposing fig around 50,000 of at least eight species.”

One study in Colorado estimated that nematodes consumed about as much grass as a prairie dog colony.

Where do They Live?

Everywhere. It’s no hyperbole to say that nematodes are ubiquitous. They occupy almost every habitat, from the ridiculous (vinegar, under the beer coasters in a German study, in the placentas of sperm whales, and in the right kidneys of minks) to the extreme (from the Poles to deep oceanic trenches to mountain tops to the depths of South African gold mines to hot sulfur springs). They are found in plants, in animals, in water, and in soil. They greatly outnumber the other animals found in their habitats—Wikipedia says that they make up 90% of all life forms on the ocean floor.

A century ago Nathan Cobb wrote: In short, if all the matter in the universe except the nematodes were swept away, our world would still be dimly recognizable, and if, as disembodied spirits, we could then investigate it, we should find its mountains, hills, vales, rivers, lakes, and oceans represented by a film of nematodes. The location of towns would be decipherable, since for every massing of human beings there would be a corresponding massing of certain nematodes. Trees would still stand in ghostly rows representing our streets and highways. The location of the various plants and animals would still be decipherable, and, had we sufficient knowledge, in many cases even their species could be determined by an examination of their erstwhile nematode parasites (Yearbook United States Department of Agriculture, 1914).

An article in a 2013 Scientific American was titled “Nematode Roundworms Own This Place.”

In appearance (and in lifestyle), there are many (many) variations on the basic theme, but the Ancient Greek imagery still applies—“thread species.” They are second only to, ahem, insects in diversity. They have been described as a “tube within a tube,” a gut surrounded by a cuticle with a cavity called a hemocoel between the two. Most are very small (well, except the one in the sperm whale, which can exceed 8 meters in length), translucent/transparent (any pigment you see comes from their food), and round in cross section (roundworms). Muscles run lengthwise and so do nerves, except for a ring of nerves and ganglia around the pharynx that constitutes the animal’s “brain.” Sensory hairs (setae) permit a sense of touch, and two pits on the head allow for chemoreception. There’s no vascular or respiratory system; nutrients and oxygen get into the cells, and wastes exit the cells, via diffusion. Nematodes move by contracting their longitudinal muscles and whipping back and forth, an action that also moves food through the gut and facilitates excretion. 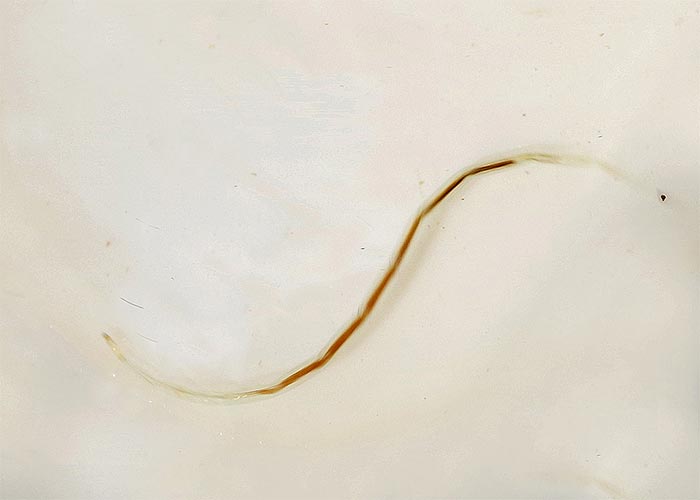 What do They Do For a Living?

Anything that exists in such astonishing numbers has got to play an important part in its ecosystems. Nematodes occupy every strand of the food web—carnivores, herbivores, omnivores, scavengers and decomposers; they are eaten by many other animals, including their brethren, and by a group of carnivorous fungi, which form a noose with their mycelia (fungal strands) and snag soil nematodes as they wriggle through (videos).

Nematodes are informally grouped as “free living” (40% of species) and parasitic (44% of the remaining species feed on animals and 15% on plants) (though the BugLady found one source that switched the last two numbers and another whose numbers landed in between). The BugLady couldn’t find a satisfactory definition of the criteria for this division, since herbivorous and carnivorous behavior is attributed to both groups. Living outside rather than inside its food source? In scanning the literature, it almost seemed like the pejorative “parasitic” may simply refer to behavior analogous to the lifestyle of a flea, but it often seems to be applied to species that damage our plants and animals and ourselves. In both groups, feeding habits and targets can be highly specialized. Some parasitic species concentrate on vertebrates, including humans and their pets (roundworms, hookworms, whipworms, and pinworms and a variety of conditions including elephantiasis are chalked up to nematodes), and others are serious pests of lawns, crops and gardens. Free living species, both aquatic and terrestrial, eat algae, fungi, bacteria, plants, tiny animals, and dead organic matter, and some are great recyclers.

Many nematodes, both herbivores and carnivores, feed by inserting a rigid “stylet” into their food source—in some the stylet is hollow and acts as a drinking straw. Others feed by “gulping” a food particle whole through a mouth opening. They may have rasping/crushing “teeth” within the pharynx – or not. You can tell what a nematode eats by looking at its mouth.

Grasshopper-eating nematodes? es, there are “insect parasitic nematodes” that feed within insects. Once inside, they release bacteria that kill their host, and then they feed on the bacteria and on their hosts’ decomposing tissue. IPNs are potential biological control agents for turf pests, mainly caterpillars and beetle grubs. For more information see (not for the faint of heart).

Usually, males insert a chitonous spicule into the operative female opening (in some species, they simply puncture the female’s cuticle anywhere—“traumatic fertilization”) and “amoeboid sperm” crawl in. Most species lay eggs that produce larvae that look pretty much like Mom and Dad.

Many freshwater nematodes are in the 1 mm size class. About half of the known nematodes are marine (salt water); the rest are found in soil or fresh water. Fresh-water nematodes live in still water and fast, rocky or mucky, and on damp shorelines. Most fresh-water nematodes can produce a mucous strand that fixes them temporarily to their substrate. It is not uncommon for them to carry and transmit disease-causing protozoans.

Anything Else We Should Know About Nematodes?

While the BugLady was trolling the internet, she rediscovered a Study of Northern Virginia Ecology that she enjoys. In particular she was drawn to the Predatory Nematode webpage. She especially likes the “Relationships in Nature” charts.

Oh yeah (belatedly)—Parenthesis Alert (as the poet John Ciardi once said, “My life is lived in parentheses”).