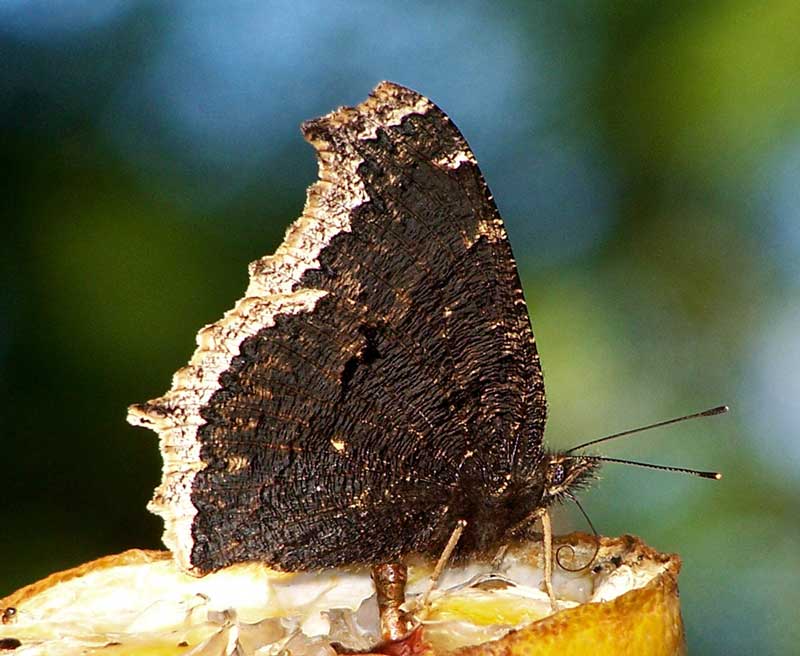 The BugLady walked in the woods, recently, on an unseasonably warm, spring day, accompanied by Mourning Cloak and Eastern Comma butterflies. It’s so cool to look down on the trail and see the shadows of butterflies! No, they had not telescoped their caterpillar and chrysalis stages into the leafless period after the Equinox—these are species that overwinter as adults and are the first to fly into the spring sunlight. This is a rewrite of an episode from March of 2009—new words, new pictures. 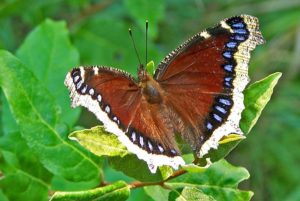 Mourning Cloaks (Nymphalis antiopa), in the brush-footed butterfly family Nymphalidae, are large and strikingly-patterned butterflies whose name comes from the dark cloak worn by someone who is bereaved. According to Wikipedia, Grand Surprise and White Petticoat are older names for the adults, and the caterpillars are sometimes called Spiny Elm caterpillars. They are the state butterfly of Montana. (Wisconsin doesn’t have a state butterfly, but we do celebrate the honeybee)

The first Mourning Cloak of the season is a welcome harbinger of spring in North America, the UK, Europe, and parts of Asia. They range as far north as the Arctic Circle, and they’re found (sporadically) in northern South America. 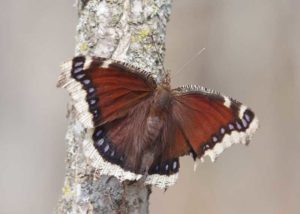 Mourning Cloaks live longer than most butterflies—10 months or more—and a complicated life story it is! Newly-minted adults emerge around the summer solstice, forage for a while, and then aestivate (suspend all activity) until early fall. It’s speculated that this reduces both predation and wear-and-tear. After a fall feeding period, they select a sheltered spot (a hibernaculum) to overwinter in. Even though they’re protected, getting frozen is a given. But glycerol (antifreeze) in their blood prevents their cells from being damaged by freezing and thawing, and high sugar levels lower their freezing point. Sometimes they emerge to fly during a winter thaw—and visit sap buckets in the sugar bush—before re-entering aestivation when the temperature dips again. According to Butterflies of the Great Lakes Region, by Douglas and Douglas, if their hibernaculum doesn’t provide them with the right mix of moisture and cold, they may become fatally desiccated in winter. 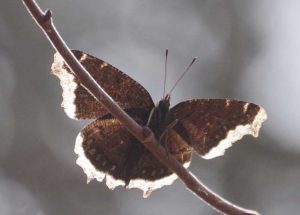 They are among the hairiest of butterflies. (Commas are hairy, too.) In spring, the hairs’ insulating value allows them to fly when the temperature sags below 50 degrees. In addition, by using a combination of basking (their dark bodies absorb heat) and isometric exercise of some flight muscles, a Mourning cloak can raise the temperature in its thorax about 5 degrees—a handy skill, since the thorax houses both wings and legs.

These early butterflies don’t need flowers for sustenance. They eat rotting fruit and feed (head down) at sap drips, especially on high-sugar species like willow, birch, maple, and oak. (Larry Weber, in Butterflies of the North Woods says they take advantage of sapsucker holes, too) Even in summer and fall, they’re seldom seen on flowers, but they like aphid honeydew.

Adults that have overwintered mate in the early days of spring. Males display for females, often in a defended territory along a sunny path or woods edge or opening.  Hikers may be confronted by amorous male Mourning Cloaks. When you enter his territory, the male will check you out and see if you have courtship in mind. If you don’t respond appropriately to his signals, he will depart and wait for more receptive company. Females lay masses of eggs around the twigs of host plants (willow, elm, hackberry, cottonwood, poplar, rose, birch, hawthorn, and mulberry). For the Mourning Cloaks who survived the winter, the show is over by the start of summer. 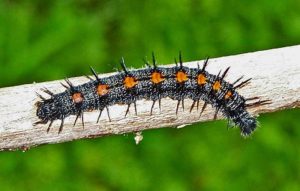 The eggs hatch, and the first caterpillars out may reduce competition by eating their unhatched siblings—“siblicide.” The surviving caterpillars live and feed gregariously on fresh leaves —initially within a web. Like Monarch caterpillars, they often take a hike away from their natal plant before forming a chrysalis. 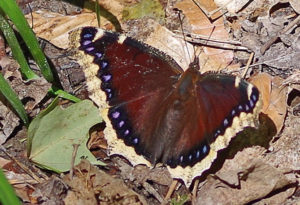 Mourning Cloaks are preyed on by the usual suspects. The eggs are eaten by beetles, bugs, ants, and mites. Adults are hunted by aerial predators like birds and dragonflies and, because they often perch on the ground, by some mammals, reptiles, and amphibians. The caterpillar mass defends itself behaviorally by thrashing around noisily at the sight of predators (their chrysalis does that, too), but a variety of wasp and fly parasitoids lay their eggs on them just the same. The caterpillars have an additional defense—don’t touch these pretty larvae, they wear “urticating (but not venomous) spines.” 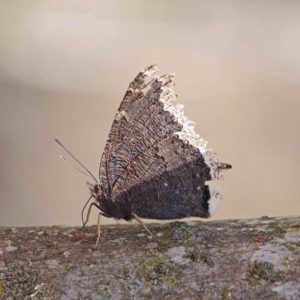 Adults are protected by the bark-like color of their folded wings, and as they launch themselves into their flap-and-glide flight, Mourning cloaks may produce an audible “click” that startles predators. When it’s surprised, a Mourning Cloak may play dead and fall into the leaf litter, where it is well camouflaged.

There are tantalizing suggestions that at least some of the North American population of Mourning Cloaks may migrate (at least one way).