No—not March yet, but it will be some day. Actually, the BugLady had to wait until the end of October to find this March fly (Bibio slossonae) (probably). She was walking in her favorite wetland on a cool, fall day and assumed that the flies around her were midges (famous for their cold-weather flights) until, as she photographed a grouse locust, along came a March fly, and sat down beside her.

“March fly” comes from their predominantly springtime flight period; of the 32 species in the genus in North America, only three fly in fall.

Adult March flies generally live in wooded areas and are often found on flowers—adults of some species feed on nectar, pollen, and honeydew, but adults of other species don’t feed at all, and in either case, they are very short-lived. They’re considered important pollinators in orchards and for some species of irises and orchids. Bibio slossonae visits the fall-blooming shrub, witch hazel. Their larvae, drab and primitive-looking, feed en masse on rotting organic material like leaves, wood, compost, and rich soil, and sometimes they damage plant roots. The Second Report on Economic Zoology, published by the British Museum of Natural History in 1904, recommends biological control— “The best way to clear them out of the soil is to turn chickens out on the land when it is being dug in spring; they devour the larvae greedily.” 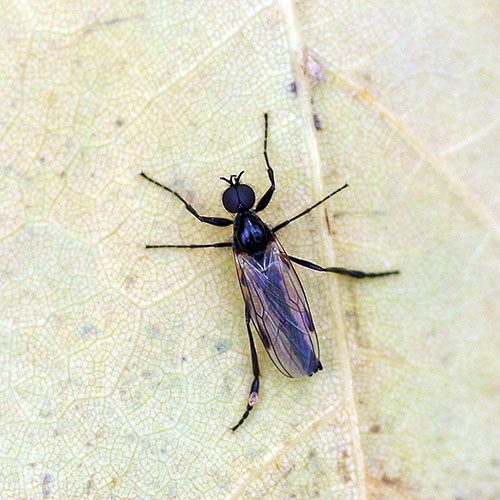 These smallish (less than ½”), slow-flying, dark flies have spurs on their tibiae and short antennae; some, especially females, have a contrasting red thorax or legs. Females have small eyes on the sides of long, narrow heads, but males have huge eyes that touch in the middle and are split in half horizontally; scientists speculate that the split makes it easier for them to see the other males that are above and below them in a mating swarm.

They may rest on vegetation, and one author describes them as flying around aimlessly, but often they’re found in large swarms that are both synchronous and single-minded. Males zero in on females, even newly-minted females that are just crawling out of their pupal cells in the soil. After mating, she uses her front legs to dig a hole, lays several hundred eggs in it, and then dies. Whichever end of the season a species frequents, they are often abroad before—or after—many of their potential predators are active.

According to Cranshaw and Redak in Bugs Rule: an Introduction to the World of Insects, “The heyday of the March fly was in the middle to late Tertiary (65 million to 2 million years ago), when they were apparently among the most abundant of all insects.”

March flies are in the family Bibionidae, whose various genera have collected their own common names—St. Mark’s fly (St. Mark’s feast day is in spring), blossom fly and garden fly, fever fly (no idea), and the most famous family member—the lovebug (not the old Disney movie). BugFans who spend quality time the southeastern part of the country, especially along the Gulf Coast, may be familiar with lovebugs (Plecia sp.) (here seen doing what they do best and demonstrating why they’re also called “double-headed bugs”). Lovebugs form large clouds, and they’re abundant near blacktop roads and vehicle exhaust because they are attracted to a chemical that forms when sunshine acts on exhaust. Globs of small flies plug radiators and assorted air intakes and, because of bacterial action during decomposition, etch automobile paint. Lovebugs are totally different than Wisconsin’s “friendly flies” (Sarcophaga aldrichi), whose populations sync with those of forest tent caterpillars Up North.

Bibio slossonae? Meet Annie Trumbull Slosson, the sixth in our sidebar series called “Who Were Those Guys?” (and Gals!), about giants in the field.

Annie Trumbull Slosson, who is a namee rather than a namer of this particular insect, got into the bug business late—almost like a second career. Born in Connecticut in 1838, into a family that encouraged both comprehensive education and the study of science for women, she had an early interest in nature, especially botany. Later, she became known for her works of fiction, mostly short stories that appeared in magazines like Harper’s Bazaar and the Atlantic Monthly, and she was renowned for her “regionalism” and “local color.” It was said that because of her environmental interests, her fiction was rich in nature imagery, and that because of her fiction-writing experience, her entomological writings were livelier and more anecdotal than were most accounts of her day (so-written, she said “to relieve the heaviness of the masculine articles”).

At the age of 48, without formal training, she embraced insects, doing a lot of collecting in the White Mountains (NH) and around New York City and Miami, and she amassed a collection of 35,000+ insects, some of them new to science. She published in the important entomological journals of her day, and she corresponded widely with the leading botanists and entomologists. She described and named some of her discoveries, and her peers so appreciated her work that one genus and more than 100 insect species were named for her.

In 1892, she became the first woman member of the very newly-formed New York Society of Entomologists; her presence initially caused some consternation among the membership, but they recovered. She wrote, “Through the smoke of pipes and over mugs of some beverage which foamed in the gas-light in a sudsy sort of way, I saw startled, embarrassed faces… The host himself, good Mr. Palm, seemed somewhat embarrassed. After seating me in the most comfortable chair unoccupied, he hastened away to order coffee for me as more appropriate and fitting drink for a feminine throat.” She helped launch the Journal of the New York Entomological Society in 1893, and she not only wrote many articles for it, documenting her biological surveys, writing insect life histories and papers on taxonomy and philosophy, but she underwrote it financially, selling mounted butterfly specimens from her collection to keep the journal afloat.

In her review of a biography of Anna Slosson by E. Ifkovic for the Florida Entomologist, Hannah Nadel says,

Her passion for what she informally called “bugology” was so intense that she apparently carried a cyanide jar even to church, and admitted to using it to collect a small moth from the pew in front of her one Sunday while on her knees in prayer.” Ms. Nadel goes on to call her “…..one of America’s most colorful early entomologists, a woman who was once listed as a tourist attraction because of her habit of flailing a butterfly net in public places, whose wit and knowledge entertained many, and who contributed generously to the field and to the advancement of the careers of both young and established entomologists.

The BugLady has to share this gem that she came across in her research. It’s from The Museum of the White Mountains and is part of a history of early travels through the mountains during the time Anna Trumbull Slosson was collecting there:

Lucia Pychowska took on the question of dress in an 1887 article titled ‘Walking Dress for Ladies.’ She urged women to wear low-heeled boots, woolen stockings, gray flannel, knee-length trousers secured with ‘loose’ elastic, and two skirts, since ‘most ladies will find two skirts more agreeable than one.’ ‘The under one may be made of gray flannel, finished with a hem, and reaching just below the knee. The outer skirt should be of winsey… or of Kentucky jean. Flannel tears too readily to be reliable as an outer skirt.’ The outer skirt was longer, so ‘a strong clasp pin, easily carried, will in a moment fasten up the outer skirt, washwoman fashion’ for going up steep slopes or moving through ‘hobble bush.’ Thus outfitted, women could have ‘appeared at the end of these walks sufficiently presentable to enter a hotel or a railroad car without attracting uncomfortable attention.’