What follows is a major overhaul of a BOTW from May, 2008. New pictures, new facts. Remember what the naturalists at Riveredge tell the kids—“Scientists don’t say ‘EEiiiooouuuwwww!’” Scientists say “Oooohhhhh, how interesting!”

Let us pause for a moment to salute that classic movie, The African Queen. People may not recall the characters’ names or whether he stopped drinking or she started drinking or whether the boat went over Victoria Falls or even who won WWI, but they always remember the leech scene.

Leeches are in the phylum Annelida, the segmented worms. They’re shaped a lot like planarians, of previous BOTW fame but are not related. They have eyespots along the dorsal side of the first few segments (though their vision is poor) and a brain and a sucker at each end. They can’t hear, but they have a good sense of taste, and sensitive skin. Unlike their (mostly) terrestrial cousins, the earthworms, leeches are flattened in cross section; like earthworms, their bodies are soft but very muscular.

All of the 700 or so known species of leech are carnivores (“liquid-a-vores,” to coin a phrase), but few feed on mammal blood and even fewer on humans. There are about 65 species in North America—some are scavengers, some prey on their aquatic neighbors, and those that are blood-suckers (haematophages) often specialize in one group, like invertebrates, turtles, frogs, ducks, or fish. The mouth arrangement depends on the diet—some families are jawless, some toothless, and some feed through a tube. Leeches that feed on small invertebrates like snails, or on amphibian eggs may swallow their prey whole, extract the bodily fluids, and spit out the crunchy-bits. Many species of leeches, like sharks, zero in on prey that splashes around in/disturbs the water. They are eaten by crayfish, salamanders, birds, turtles (turn-about is fair play), carnivorous aquatic insect larvae, and fish (which is why they’re used for bait).

The “business end,” the mouth, is located within the front sucker. Bloodsucking leeches scrape their sharp teeth back and forth on the skin to start the blood flowing, and then they clamp down with their sucker like a little limpet, creating a tight seal on the wound (using a fingernail to break the suction is one way to detach a leech). They inject both a painkiller and an anticoagulant and may suck out five times their weight in blood (which can take 20 minutes or several hours) before dropping off. Some species can wait a year or more before eating again.

Leeches enjoy quiet, sun-warmed ponds with plant debris on the bottom, and, just when you thought it was safe to go back into the water, a healthy leech habitat may support as many as 7,000 leeches per square meter (so it’s a good thing we don’t use the metric system here) (one source says that if you don’t like having leeches in your pond, get rid of the frogs). Leeches can travel along on the underside of the surface film, like upside-down inchworms, hanging on to that sticky, top layer of water molecules with both front and rear suckers; they can move the same way over the pond’s floor, and they are graceful, undulating swimmers. Leeches that live in ephemeral ponds survive the dry periods down in the mud, dormant, and overwintering leeches in permanent waters do the same. 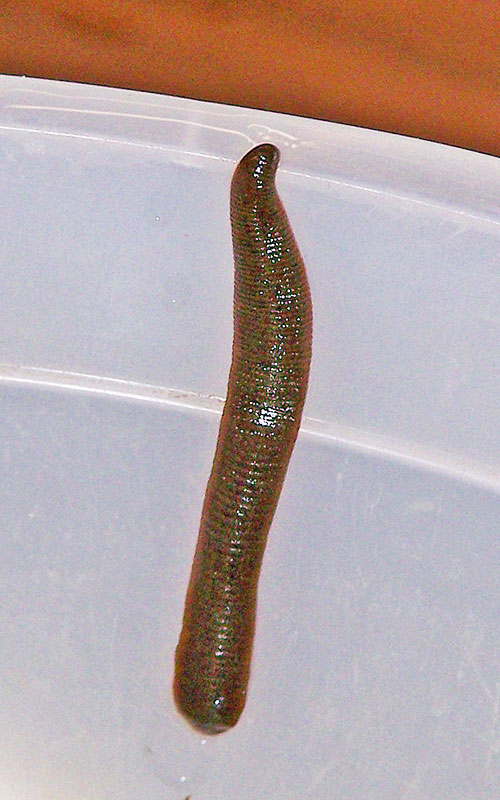 They are hermaphroditic (having characteristics of both genders). Each individual has both eggs and sperm, and they fertilize each other. Some species leave a sac/cocoon of eggs in a damp area; others carry the sac around on their ventral (underneath) side until the eggs hatch, whereupon the babies eat the egg sac before swimming away. One family of leeches exhibits parental care, shielding the eggs with their bodies, circulating the water to keep bacteria and fungus spores from settling on them, and then carrying the little suckers (affectionate term) to their first meal. In any case, the youngsters look and act like dear old Mom/Dad.

And, just when you decided never to go into the water, turns out that there are terrestrial leeches, too! Most are tropical and on the other side of the globe. Most. But, in an article in The American Naturalist called “An American Terrestrial Leech,” written in 1890, author S. A. Forbes reports on Semiscolex (now Haemopis) terrestris, a terrestrial leech that eats earthworms and snails (the BugLady is not making this up) and is found in moist soil as far as a half-mile from water in central Illinois. A related leech was found in Michigan and Connecticut.

The plot thickened when a third member of the genus was discovered in New Jersey about 10 years ago. At nearly a foot long, it weighs in as one of North America’s largest leeches. After nearly running it over with the lawn mower, its discoverers brought the leech into the house, put it in an aquarium, and contacted a leech expert at Rutgers. Read all about it on the NJ.com and a M.S. Thesis from Rutgers University entitled “A new species of Haemopis (Annelida: hirudinea)“. Terrestrial leeches can be found from the Great Plains to the Great Lakes to the Gulf shores to the Atlantic.

About 1,500 years ago, Hippocrates preached that the body was governed by four humors—blood (sanguine), yellow bile (choleric), black bile (melancholic) and phlegm (phlegmatic). For centuries, leeches were applied by physicians/practitioners (themselves called Leeches) in order to bring the four humors back into balance. Leeches are making a come-back in medical practice today, but in a more targeted manner. They are invaluable in reattachment surgeries, where they remove fluid from swollen digits, and modern science is confirming the value of leech saliva/therapy for arthritis, heart and circulatory disorders, certain skin diseases, and to stop the spread of some cancer cells. For an interesting article on the topic, see the article “Leech Therapautic Applications” in the Indian Journal of Pharmaceutical Sciences (no, medicinal leeches do not go from a carefree life chasing frogs in a pond into the operating room, they are raised in sterile labs).

There’s a lot of information/folklore out there about motivating a leech to let go, should you stand still long enough for one attach. As always, stay away from things flammable, caustic, or alcoholic (for the leech, anyway). Sprinkling it with salt works, but apparently, there is more discomfort from a forced separation than from the natural departure of a satiated leech. Remember that anticoagulant? There will be bleeding.

The hefty leech pictured here is one of the Macrobdella leeches, probably Macrobdella decors, the American medicinal leech. There are several leech families; this one is in the Hirudinidae. They have a row of orange spots down the back, ten eyes, and three jaws equipped with many, small teeth. They mostly feed on the blood of cold-blooded vertebrates, plus the odd frog egg, aquatic insect larva, and mammal (including us), and they can grow up to be at least six inches long (remember, they’re stretchy). They’re found in ponds, lakes, marshes and streams east of the Mississippi. 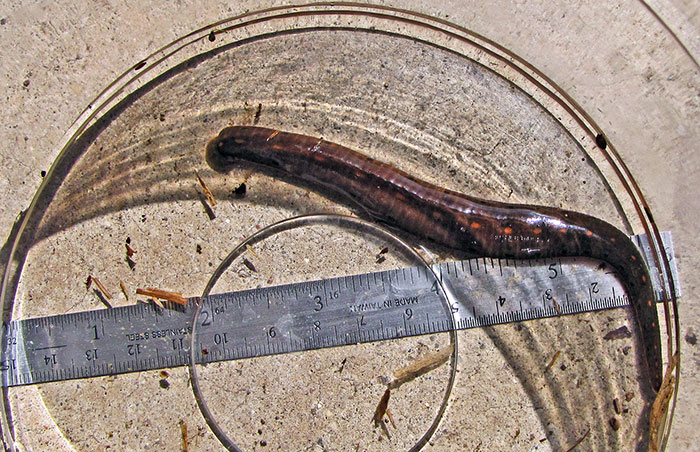 So—on the positive side of the coin, leeches are colorful, graceful, diverse, and fascinating critters. On the negative side—they are, well, leeches, with all of the attendant, emotional baggage (ours) that comes with that.

Fun leech fact: You can take them home and name them and feed them ground beef or snail meat, and they may grace your aquarium for a decade or more.

Another fun leech fact: When they were filming that unforgettable scene aboard the African Queen, the leeches kept falling off of Humphrey Bogart and Katherine Hepburn. Why? Because the leeches viewed the people who were grabbing them as predators, not prey, and they wanted to escape, not feed.

How Does Nature Cope with Wisconsin's Unnaturally Warm Weather