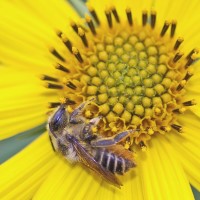 The BugLady loves standing next to flowers and photographing their visitors (N.B: communal nesters like honey bees, bumble bees, and paper wasps will sting to defend their nests/hives, but they’re harmless on their food sources unless you really get in their face). Lots of insects – butterflies, moths, wasps, beetles, flies, and ants – pollinate plants, but some are better at it than others.

Bees seem to have been designed to do the job. There are more than 400 species of native bees in Wisconsin, and they pollinate native plants, ornamentals, and farm crops, alike. Native bees are considered “keystone species” because of the profound effect they have on their communities, tending the plants that produce the fruits, seeds, nuts, and leaves that feed and shelter other animals. Imagine what the landscape would look like if the pollinators disappeared! 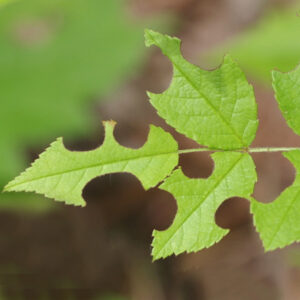 Leafcutter bees are in the family Megachilidae (Greek for “big lip,” because of their big, toothed mandibles), a family that includes leafcutter, mason, carder (the BugLady wants to find a carder bee because they have such a cool story to tell), and resin bees – all named for the materials they use to make nest chambers for their eggs. There are about 4,100 species of Megachilids in the world (630 in North America), and they’re a cosmopolitan bunch – found just about everywhere.

(Most) adult Megachilids drink nectar from a wide variety of plants, and many species are long-tongued, which allows them to harvest pollen and nectar deep within a flower. There are a few black sheep in the family – brood parasites that reap the harvest of other species’ labor by waiting until an egg chamber has been provisioned and then inserting their own egg. Their offspring will kill the rightful owner of the cache (if Mom didn’t, already), steal the food, and develop in the chamber. It’s called kleptoparasitism.

The stars of today’s show are the leafcutter bees in the genus Megachile. Bugguide.net tells us several basic ways of telling bees from the often-similar wasps, yellowjackets, etc. First, bees are hairy, and at least some of those hairs, especially those on the thorax, are plumose (branched); wasps have simple hairs. Second, bees eat pollen, so they (the females, anyway) need to have a way to transport it. Most bees have scopa, which is Latin for “broom” (plural – scopae) – dense, textured hairs that the pollen collects on. The hairs of the scopae are electrostatic, and the bee uses its forelegs to move pollen that collects on its hairy exterior to its scopae. Bumble bees and honey bees have pollen baskets rather than scopae, and some kinds of bees transport pollen by eating it. 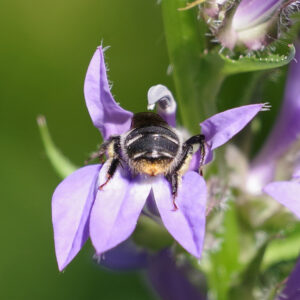 At first glance, some leafcutter bees look similar to dark-colored honey bees and sweat bees, but their head is disproportionally large (because it houses the bulky muscles that operate that “large lip”). Females have a pointed abdomen, while males’ are blunt). And then there’s the scopa. Many bees, like this long-horned bee collect pollen in the dense hairs on their back legs, but leafcutter bees carry pollen on hairs on the underside of their abdomen. As Planet Bee’s bee-blog says, “This creates bright yellow/gold colored bee butts that are easy to spot”.

About their courtship bugguide.net says, “Males of most species have enlarged light-colored front legs with a fringe of hairs and with odor glands. They use these features during mating. They partially cover the female’s eyes with their hairy legs and the odor glands are placed close to the female’s antennae.” After they mate, the male dies, and, like other solitary bees, the female starts to construct a place for her eggs.

Many solitary bees nest underground, but leafcutter bees mainly pick nest sites that are above ground. They favor pre-existing insect tunnels in rotting wood, man-made holes (another common name is “wall bee”), wind chimes, pithy hollow stems like rose canes, and even abandoned snail shells. Like other solitary bees, leafcutter bees cache provisions in chambers, deposit an egg, seal the chamber, and depart when the tunnel is complete. A tunnel may be 8” long and contain a dozen chambers, each housing a single egg, and she may make several tunnels.

For her young, she collects nectar and pollen, and she uses her saliva (which may have antibacterial and anti-fungal properties) to fashion them into a “loaf” of bee bread. The larvae hatch and eat and grow, and sources disagree about whether they overwinter in a prepupal stage and then finish their metamorphosis in spring, or whether the mature larvae pupate and emerge as adults in fall, waiting out the winter within their cells, and chewing out in spring. 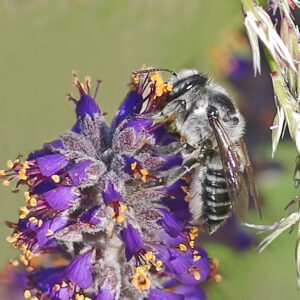 Leafcutter bees are famous for two things, and one of them is cutting leaves, which they do in order to build a more hospitable egg chamber for the next generation.

The tunnel she fashions into a nursery for her eggs is lined with overlapping ovals of leaves (or in the case of simpler-jawed species, of petals) that form a narrow cylinder (to seal the door to each cell she cuts a circle). Each egg chamber is separated from the others by a wall made up of chewed leaves and resin. Scroll down to the video of a bee in action, and here are pictures of bees carrying pieces of leaves: here and here. During her life, a female may carve off 10,000 tiny, green discs. White ash, Virginia creeper, lilac, and rose are favorite leaves. 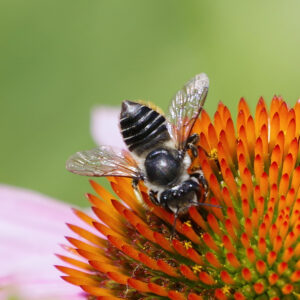 The other thing they’re famous for is pollination: here and here. Leafcutter bees scramble all over the flowers they land on; the pollen they carry under their abdomen is loosely held, and it dusts each blossom, sharing the wealth (a honey bee wets the pollen so that it sticks to her legs better; the pollen she spreads is that which is caught on the hairs of her body). Because leafcutter bees are homebodies, probably living their whole lives within 100 yards of their nest tunnels, the flowers they pollinate are neighborhood flowers.

According to the US Agricultural Research Service, the efforts of one alfalfa leafcutter bee are equal to that of 20 honeybees, and in greenhouses, 150 leaf cutter bees = 3,000 honey bees. They are important pollinators of crops from alfalfa to blueberries to sunflowers, and like honeybees, they are used commercially. Farmers provide bee boards for the bees to nest in, shelter them during winter, and put them out for the next growing season.

How can we help these very helpful, but unsung, creatures? By not disturbing their nests (the BugLady doesn’t take in her wind chimes in winter, because so many things are nesting in it) and by hanging Bee Hotels, bundles of tubes, in your yard (here’s a bee using one). There are many designs available online for DIY folks, or you can buy them in garden stores. Solitary bees are not aggressive, only stinging if you decide to handle one, and a leafcutter bee is more likely to bite than sting. One source said that watching bee houses is as entertaining as watching bird houses!

Awesome pictures at this link.

Go outside – thank a pollinator!