The BugLady was stumped by this nifty moth in May, but she shouldn’t have been, because she’s photographed its notorious family member, the Eastern tent caterpillar moth (thanks for the ID, BugFan Les). And then in August, she received a query from the owner of a tree nursery, worried about the fabulous caterpillar that was sitting on one of her saplings (the BugLady for sure wants to see one of those caterpillars, though they’re doing their best to avoid being seen). Wagner, in Caterpillars of Eastern North America, says “I have never found a caterpillar by visual searching.” (He finds them by beating on branches). The BugLady also wants to see the related Large Tolype, too.

Lappet moths/American lappet moths (Phyllodesma americana) are members of the family Lasiocampidae. Lasiocampa comes from two Greek words meaning hairy and caterpillar, and according to bugguide.net, phyllodesma comes from phyllon (a leaf) and desma (a band), which refers to bands on the wings of these leaf-mimicking moths. Family members are variously called Snout moths because of their protruding mouthparts (a name they share with a totally unrelated group of moths), Eggars (the cocoons of some species are egg-shaped), and lappet moths. Lappet? One on-line dictionary that ranks the difficulty of words tells us that “few English speakers likely know this word.” A lappet is (a) a kind of/process of weaving; (b) a fleshy protrusion like an earlobe or a wattle on a bird’s head; and (c) a small flap, fold, or dangling part, like the fleshy-bits on the prolegs of the Lappet moth’s caterpillar. The BugLady is happy to be of service. 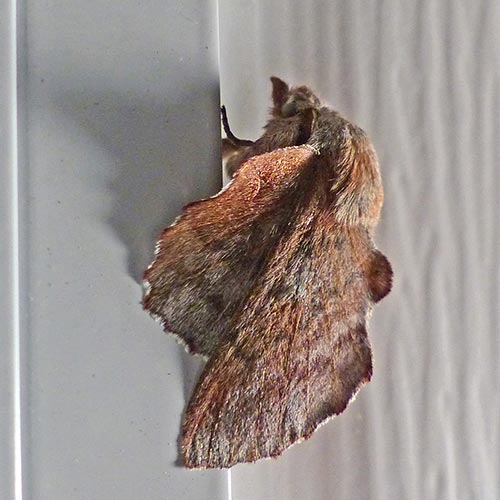 There are only three species in the genus Phyllodesma in North America—the widely distributed LM, the Southern LM, Phyllodesma occidentis (a.k.a. P. carpinifolia), which pretty much replaces the LM in the Southeast, and a Californian named P. coturnix. The very variable LM is chunky and hairy, with subtle, often rusty-colored, broad, slightly scalloped wings. LMs are strong fliers, and they sit with their hind wings flared out and their front (top) wings tented. Females are slightly larger than males.

The equally-variable, softly-hairy caterpillar has a fringe around the edges and two red/orange, slashes at the front of the abdomen that are visible when it is alarmed or ambulating. The caterpillar’s gray is often decorated with faint, orange and/or blue stripes. Reference after reference stated that the “caterpillars have dorsal glands toward the rear of the abdomen,” but no one elaborated. Ant-tended caterpillars (which LMs are not) exude “honey” from dorsal glands to reward their caretakers, and other insects may emit noxious chemicals from dorsal glands as a defense.

LM caterpillars are generalist feeders, found on members of the willow/poplar, rose, ash, oak, birch, and buckthorn (!) families. Their Tent caterpillar kin can be destructive on a variety of hardwoods, but (as the BugLady, probably futilely, reassured the nursery owner) there are no red flags about LM caterpillars from any of the Extension, forestry or exterminator sites (and it doesn’t take much to raise a red flag on a forestry/Extension/exterminator site). Adults do not feed. 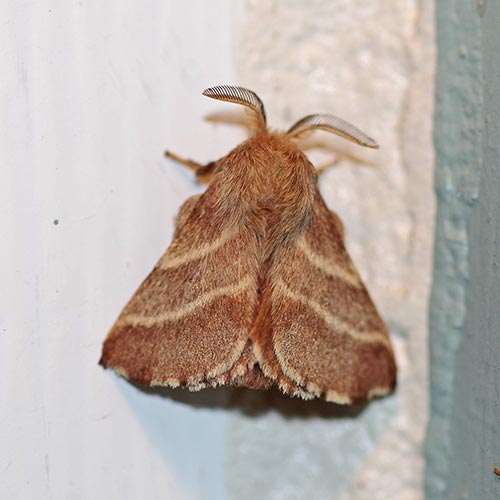 Male LMs find their ladies in the dark of the night, through pheromones (chemicals) that she releases. Receptors in his feathery antennae are finely tuned to detect her “perfume” from as far as several miles away (where it may occur as a single molecule in a cubic yard of air), and trace it back to her. Just as we need two eyes for binocular vision, he needs two antennae so he can register which one is receiving the stronger signal and therefore set his GPS.

She lays her eggs on leaves of host plants, and the caterpillars hatch and feed at night. There’s a single generation of LMs a year in the North (two in the South), and the overwintering pupa may be concealed on the host plants.