In honor of the annual reappearance of June beetles/bugs this past week, the BugLady is dusting off and sprucing up a BOTW from six years ago. A clarification: a number of different genera of beetles in various regions of America are also popularly called June bugs/May beetles (and there’s even a conspicuous on-line image of a Japanese beetle, genus Popillia, labeled as a June beetle). OurJune bugs, in the genus Phyllophaga, are the real ones. Just sayin’.

So, today we will consider one of the BugLady’s favorite beetles, and not for the last time, revisit the word “bug.” The June “bug” is not a True Bug. True Bugs are in the order Hemiptera (half-wing—because in the original order Hemiptera—) not the new, improved, “lumped” order that combines Hemiptera and Homoptera. Hemipterans characteristically had wings that were leathery on the proximal half, with the membranous distal half folded underneath. Beetles (order Coleoptera, sheath wings), have two pairs of wings. The front pair, called the elytra, is hardened, but the elytra cover and protect two membranous wings that are used for flying. In flight, the elytra are held out to the side, which causes beetles to look like tiny bi-planes and to fly and land awkwardly. After a beetle lands, its flying wings don’t always get tucked in neatly. When JBs fall off the BugLady’s door and land on their backs, they spin around, glaring up at her, struggling to right themselves.

If JBs are “clumsy;” they are also described as “clingy,” in a sticky-legged way. They love grabbing screens, and they will hold onto clothing with their long, gangly legs (in a totally non-menacing way).

JBs are members of the Scarab family Scarabaeidae, renowned by ancient Egyptians. Scarabs, no matter what their species or size or shape or color, have small, flat plates at the tips of their antennae and can open those plates like a fan. June beetles have three plates, which are held at right angles to the antenna. There are roughly 400 members of the genus Phyllophaga north of Mexico, and many species cannot be distinguished without looking at their “naughty bits.” 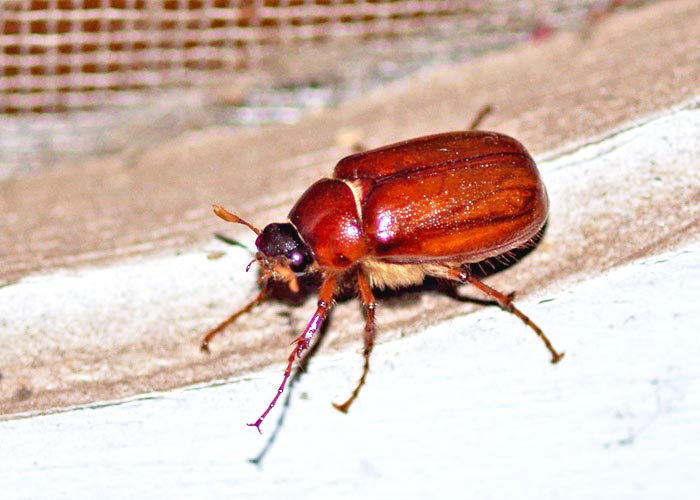 When they are not eating leaves, the nocturnal JBs come to lights. They are a species that carries on its affairs in darkness—in fact, Wikipedia cryptically states that adults die after being exposed to the light for too long. A number of years ago, the local JB population boomed, and the sounds of June bugs as they flew into and fed in the trees at night was loud enough to be mistaken for a breeze rustling the leaves. June bugs spend the day sheltered under the ground (or in the woven, front door mat—without tearing their flying wings, thanks to those elytra). They emerge after sunset over a period of several hours; yet at dawn, the whole population disappears within ten minutes. A June bug got into the BugLady’s house one night, and the cats found it the next day in the rug, burrowed under the foot of a chair.

The diurnal manifestations of the JB generally consist of individuals snagged in spider webs by the porch light (the BugLady can’t help but admire the pluck of these small spiders), or as high-fiber elytra, discarded on the ground, evidence of someone’s midnight snack.

According to the excellent A Guide to Observing Insect Lives by Donald Stokes, the females of many species have such short wings that they are essentially flightless (so the beetle that crashes your party is probably a male). Females attract their mates via an airborne pheromone, which gives the old “come hither” to males within twenty yards. 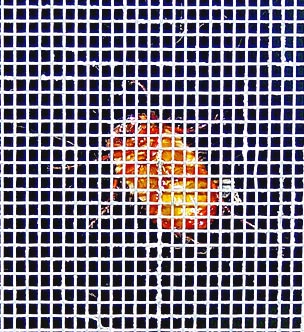 A female lays 50 – 100 eggs, a few at a time, in “cells” that she excavates in the soil. The eggs hatch soon afterward, and although some species of JBs may live a total of three or four years, they spend most of that time as grubs. Insects that live longer than the usual eight or nine months must make plans to survive winters, and they also have the opportunity to develop an immune system. The JB overwinters as a grub, below the frost line, for its first two years and although pupates at the end of the next summer and emerges as an adult shortly afterward, it spends its third winter underground as an adult.

JB larva (the larvae of beetles are often called grubs) are known to people who grow lawns and gardens as “white grubs” (an inaccurate generic term). They are sometimes pests of grasses and agricultural crops (the BugLady has a color slide of a JB grub feeding on a newly-dug potato) and will move on down a row of plants, nibbling the roots of each plant as they go. Adults eat leaves of a variety of trees (phyllophaga means leaf eater).

The larvae of the spectacular American Pelecinid wasp are parasitic on some ground-dwelling beetle grubs, including JBs. Ms. Pelecinid bores her impressive ovipositor into the soil and deposits her eggs on her young’s larvae. A few flies are parasitoids of the adults.

So, to summarize: June bugs are beetles that often appear at the end of May (and so are sometimes called May Beetles) and can be found through part of July (but are never called July Bugs).