The BugLady is busy tidying her cellar in advance of the furnace guys, so she offers this revised version of a previous episode about centipedes (enhanced with an all-new biography of the awesome House Centipede, pictured in a bathroom sink). In honor of all the BOTWs that have originated in her basement.

Warning: in a parentheses-ridden series, this one may take the prize.

According to Wikipedia, “a 19th century Tibetan poet warned his fellow Buddhists that ‘if you enjoy frightening others, you will be reborn as a centipede.’” 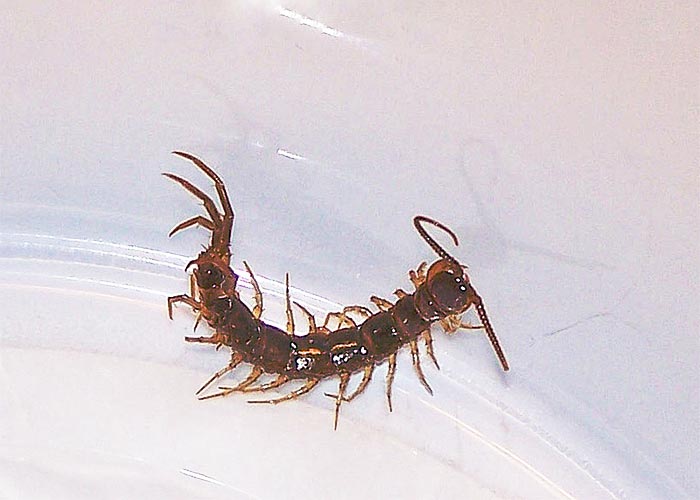 Like insects, they are Invertebrates (as in, “we don’t need no stinkin’ backbone”). Like insects, they have an exo(outer) skeleton, and they are in the phylum Arthropoda (meaning “jointed legs”). They’re in the class Chilopoda, which has a 380 million year track record on this earth. There are probably 8,000 species of centipedes globally, and they live as far north as the Arctic Circle.

Millipedes, of previous BOTW fame, have two legs on each side of each leg-bearing body segment, and centipedes (hundred legs) have one leg on each side of each body segment. Typical Wisconsin centipedes have about 15 leg-bearing segments, which leaves us substantially shy of 100 legs, but there are centipedes elsewhere in the world that have as many as 191 segments and so do attain hundred-leg status. Centipedes’ legs tend to be longer than millipedes’, and they wriggle when they travel because they move the legs on one side and then on the other.

Centipedes are carnivores that spend the daylight hours in the dark and humid world under leaves, logs and soil (because they lose water through their exoskeleton, they seek out damp habitats). Like other inhabitants of the litter, they are flattened, smooth, and drab (color is wasted in the dark). They emerge at night to hunt for insects and other small invertebrates, and, when no other food is available, they will eat their brethren.

Their first pair of legs has been adapted with small, lobster-like claws called forcipules, complete with poison ducts that allow centipedes to grab, subdue, and handle their prey (some can deliver a painful sting to humans). Forcipules are also used for grooming the other legs. In the Field Guide to Insects of North America, Eaton and Kaufman refer to the first pair of legs as “fangs,” though they are not, strictly speaking, mouthparts.

Most centipedes have a number of ocelli (simple eyes), though some species are eyeless, and in other species, ocelli are clustered to form compound eyes. Whatever the arrangement, ocelli allow only the distinction of light from dark. According to the Silversteins, in their wonderful kids’ book Life in a Bucket of Soil, centipedes that have been “blindfolded” (through the application of paint to the ocelli) still strenuously flee the light; they probably have light sensors in their skin. Centipede sensory equipment also includes one pair of antennae (a specially modified pair of back legs acts as an additional pair of antennae in some groups). Because their world is dark, they locate their prey through the constant action of their antennae, which may decode olfactory as well as tactile stimuli. Some groups of centipedes have organs at the base of the antennae that might pick up vibrations.

When Mr. Centipede locates the object of his affections (by feel) he may make a web across the passageway and place a sperm packet in it or he may simply place a sperm packet on the ground. Whatever the strategy, Ms. Centipede retrieves the packet, stashes it internally in one of those hard-to-reach spots, and starts knitting little booties. The females of many arthropod species walk away from their eggs and may, if they later encounter their young, eat them. The females of some centipede species curl around their eggs to hide, protect and groom them—licking them to remove the fungus spores that would kill them. Some females continue to guard their young after hatching and these species may be (first vocabulary word of the day) matriphagic. Their first meal is their mother.

The House Centipede (Scutigera coleoptrata) (in the family Scutigeridae) is a large (1 ½” – 2”+), leggy (typically 15 pairs, increasing in length from the first segment to the last), speedy (clocked at 1.3 feet per second or 42 mph) and striking foreigner that has, in the past 150 years, hitchhiked around the globe from its ancestral Mediterranean home (it’s first stop in the Americas was probably Mexico or Guatemala). Before the BugLady got that hole in her bathroom wall fixed, she would find HCs stranded in the bathtub, unable to climb the slippery porcelain (she released them in the basement to eat silverfish, crickets, flies, earwigs, and other basement-dwellers and to be eaten by the milk snakes). They can’t survive the winter outside here in God’s Country, and many live their entire lives indoors. 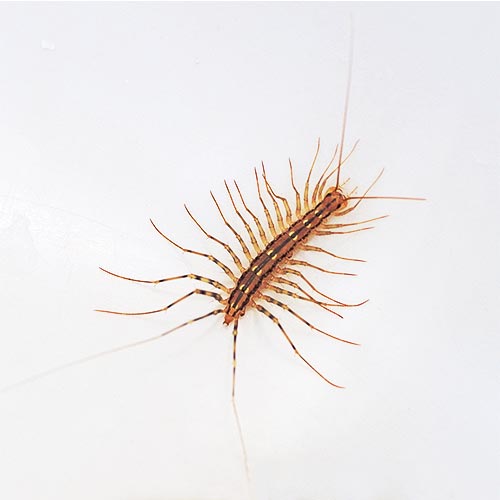 The HC’s final set of legs is adapted to act as antennae, and if an HC is sitting still, it’s hard to decide which end is which (in this picture, it’s pointed northeast). That’s called automimicry (self-mimicry; one part of the body imitates another part) and it confuses predators.

In spring, a young HC’s fancy turns to love. They court by circling each other and touching antennae; female HCs don’t attend the subsequent eggs. Young centipedes look like their elders, but with fewer legs, and they add legs as they molt. Unlike many arthropods, centipedes continue to molt as adults.

A feeding study conducted by Lewis and published in 2007 reported that the HC is a surprisingly intelligent hunter that avoids “dangerous insects” and that takes its prey’s defenses into account. When an HC attacks a wasp, it will deliver its venom but then back off until the venom has immobilized the wasp. If a predator grabs it by the legs, an HC can shed those legs and regenerate new ones when it molts next.

Did you know: that the largest living centipede, the Amazonian Giant Centipede, measures more than a foot in length and hunts for small vertebrates, including bats? The longest known centipede was more than a yard long (and is no longer with us).