The hickory tussock moth (HTM) is in the family Arctiidae, a group whose moths are often called “tigers” and whose caterpillars, deservedly, “wooly” (as in wooly bear or wooly worm).” Despite an overlap in common names, the HTM is not in the same family as the white-marked tussock moth of previous BOTW fame. Arctiids have a thorax that comes equipped with a sound-producing organ. The moths “vocalize” to attract mates and to defend against predators. Apparently, the moths taste awful (the BugLady does not know who determines these things), and they emit ultrasonic clicks that advertise their identity and location to bats. The theory is that after one unfortunate “learning experience” (unfortunate for the moth, too) a bat avoids them (which bears out the old saying—“Nature is careful of the species but careless of the individual.”). Alternatively (depending on whose research you read), the clicks cause confusion for bats. Because an animal that is able to make sound probably needs to be able to hear it too, Arctiids have “ears,” also located on their thorax. 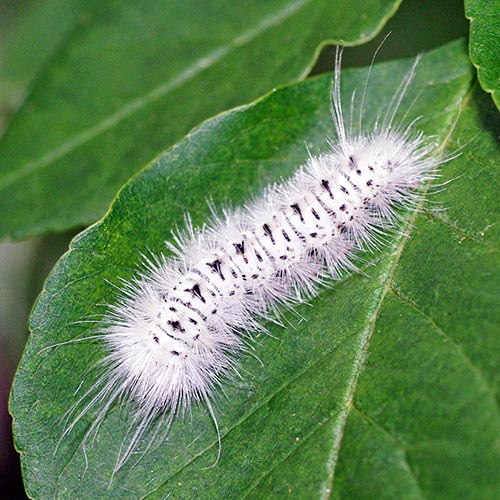 HTMs (Lophocampa caryae) are active in the daytime. They are found (spottily) in deciduous woods in a range that runs diagonally across the continent from northeast to south-central—from Nova Scotia and Ontario to Texas and a bit west, nicking Wisconsin.

After a male and female find each other in late spring, romance ensues. Ultimately, large masses of eggs (from 50 to several hundred) are deposited on the undersides of leaves. Often, when eggs are laid en masse, the resulting caterpillars also feed en masse, at least for the first part of their caterpillar-hood, going their own way during the second half. HTMs are leaf skeletonizers (they eat the green stuff in-between the leaf veins). Nut trees are their main host plant, but they also nibble on elm, willow, ash, aspen, and oak. Even though they are communal feeders, they generally disperse before they damage trees. Adults don’t eat anything. See http://bugguide.net/node/view/418061/bgimage for a picture of the adult. 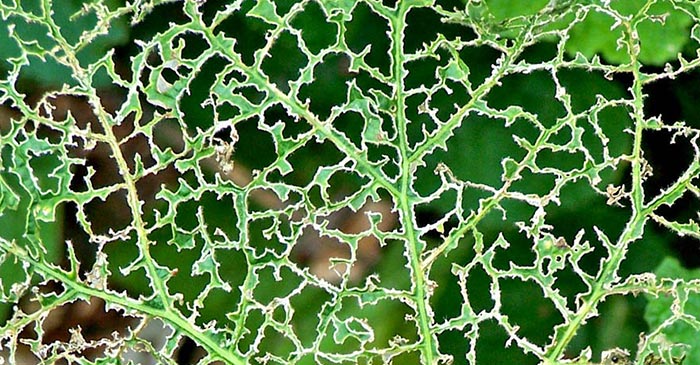 Hairs (setae) that stick up in tufts are standard equipment on Arctiid caterpillars. HTM larvae are pretty caterpillars—usually white, decorated with black tufts and spots down the back and sides, with a (sometimes white, often black) “hair pencil” or “lash” on each corner. The HTM is a relative of the famous black-and-rust, weather-predicting wooly bear (Isabella Tiger moth) caterpillar, whose hairs are harmless. But the hairs of the HTM spell trouble, especially the longer “lashes,” which are connected to poison glands. These hollow tubes allow the pokee to introduce a chemical into the poker.

For most of us, a close encounter of the HTM kind results in a burning, nettle-type, itchy rash. Cleaning the sting with soap and water, dabbing on some ammonia or calamine lotion, and topping it off with some ice should handle the problem. More sensitive souls can experience swelling and nausea and may have to see a doctor. The fuzzy setae that cover the caterpillar’s body are barbed and are mechanically irritating, especially if accidentally rubbed in the eyes. Wikipedia reports that HTMs can bite, making them triple threats.

Animals that are poisonous generally find a way to advertise it (think Poison Arrow frogs). HTM caterpillars have (the BugLady loves this word) aposematic coloration which, according to Merriam Webster, means “being conspicuous and serving to warn”. Other examples of aposematic include “look-at-me” postures, smells, or sounds (like the HTM moth’s “vocalizations”). Behavior also warns potential predators, who learn that conspicuous, communally-feeding insects often have something up their sleeves.

It is speculated that HTM caterpillars, which hide in plain sight, get away with it because they are not only fuzzy—most birds avoid fuzzy caterpillars—but poisonous through and through, beyond the hollow hairs. HTM caterpillars may ingest poisonous compounds from the leaves they eat; the alternative would be that they manufacture their own chemicals, in-house. If the moths are distasteful, it’s probably because they have retained toxins they housed as caterpillars. In some species of poisonous insects, Mom transfers toxins to her eggs, protecting the next generation.

HTM caterpillars pupate in late summer, and they spend the winter in an egg-shaped, silk cocoon on the ground or under tree bark. Caterpillars molt/shed their skin five or six times on the path between egg-hood and pupa; an instar is the eating stage in between two molts. During their final instars HTM caterpillars grow a crop of tiny hairs that they weave into the outer layer of their cocoon for protection. Cocoons also fall into the “Handle with Care” category.

Dedicated to BugFan Bill Cowart, who left us recently.
Musician, birder, moth enthusiast, mentor and all-around good human being.
The world is a poorer place.
CaterpillarsMoths