The Hackberry Emperor (a.k.a. the Hackberry butterfly) is a classic example of what happens if you put all your eggs in one culinary basket. Its caterpillars feed on the several species of hackberry trees/shrubs. Period. As hackberry trees grow, so grow hackberry emperors. Hackberry trees (Celtis spp.) and their butterflies are found over about two-thirds of the U.S. In Wisconsin, you’re most likely to see a Hackberry Emperor (HbE) in the southwestern third of the state and along the Mississippi River, but there are records elsewhere. The HbE is considered a fairly common butterfly in its range, but it is often overlooked because it’s flying around the tops of the trees. 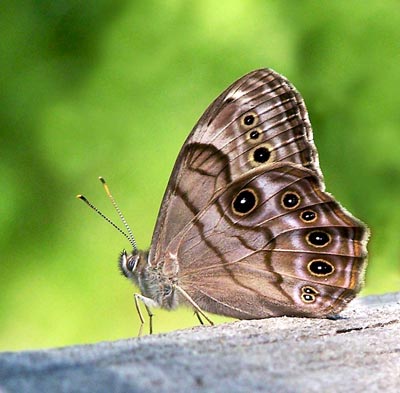 The Hackberry Emperor’s scientific name is Asterocampa celtis. Asterocampa means “star caterpillar”—it has star-like “antlers” in front, and “celtis” for the genus name of the hackberry trees. HbEs are largish, handsome butterflies with wingspreads of about 1 ½” to 2 ½” (males are smaller than females, with narrower wings). They have lots of eyespots! At first glance, you might mistake a hackberry emperor with its wings open for a painted lady butterfly, and one with its wings closed for a Northern Pearly-eye (one of the Browns/wood nymphs). HbEs show a good bit of variation in lightness/darkness/color intensity/eyes/etc. geographically. A century ago, spearheaded by W.J Holland in his 1898 volume The Butterfly Book, the list of emperors and empresses was populated by the mountain, the tawny, the dusky, the pale, the Texas, and the hackberry emperors, and the Empresses Louisa, Antonia, Alicia, Leilia, and Flora (the man loved his royalty! Thanks, W.J.). Since then, species have been lumped, PhD dissertations have been written, and today’s list feels a bit impoverished at just three or four species.

Probably because of the confusion about species and subspecies, there’s uncertainty about the feeding habits of the caterpillars. Females of some species/subspecies lay a multitude of eggs in a small area, and the young caterpillars initially feed communally. Others deposit single eggs, and their caterpillars feed alone. Depending on whose book you read, the HbE can be found in either camp, but the BugLady puts her money on Wagner’s Caterpillars of Eastern North America, which says that they solo. Ravenous eaters, a bunch of caterpillars can defoliate their hackberry. Caterpillars (green, with twin tail pipes) rest on the under-surface of leaves, and one researcher spotted them easily by standing under small hackberry trees at night and shining a flashlight up into the leaves. 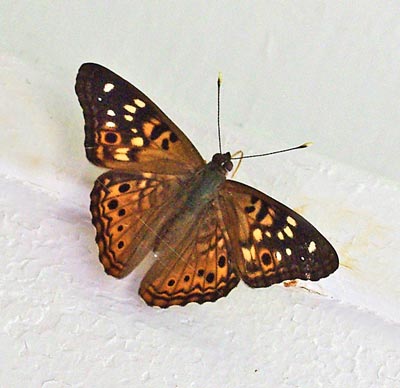 There are two generations per summer, and the second brood overwinters as half-grown caterpillars. They roll up a leaf and hide themselves inside (turning brown before they do, all the better to match their dried-leaf hibernaculum), but there is disagreement about whether they secure the leaf with extra silk so it will stay on the tree, like some species that pupate inside a rolled leaf, or let it fall. This method of passing the winter is called diapause. Wherever they emerge from in mid-spring, they resume eating (and turn green again), and soon pupate (their pupal case has horns, too). You won’t find the adults on flowers—they like dripping sap, rotten/fermenting fruit (a southern species/subspecies specializes in rotting persimmons), carrion, and animal droppings. They get moisture and minerals from puddle edges, and they sip sweat from animals, including humans.

Search for HbEs on trees or other perches off the ground, where they often sit head-down (they like the sides of buildings, too). They have a rapid and erratic flight punctuated by flat-winged glides. Males, most active from early afternoon to dusk, check for females from perches and will buzz and/or sit on intruders. People misinterpret this behavior as “friendly.” The feisty males are seen more frequently than are the females; males are attracted to bright objects—red and white are favorite colors—and can sometimes be lured in with a piece of white paper. Don’t stop looking for HbEs just because the sun is going down; not only are they sometimes crepuscular (active at twilight; the root word means “dusky.”), they have been caught at light traps at night. There are accounts of swarms of HbEs containing 50 or more individuals, especially in the southeastern part of their range. 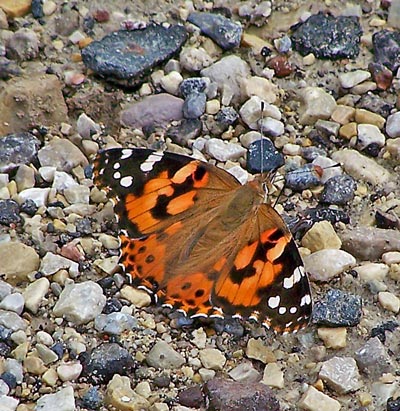 Insects are, of course, cold-blooded. “Children of the Air,” as one author calls them, they are at the mercy of the ambient temperature. The colder they are, the slower they are. But insects have a few tricks up their little sleeves, including two methods for raising their body temperature (one passive and one active). HbEs are “dorsal baskers;” they perch with the top (dorsal) side of their body perpendicular to the sun’s rays for some passive solar heating. They may flatten their wings to cut off air movement that would cool their underside, raise their wings to block the wind and reduce heat loss from their dorsal side, or pump their wings slowly. But they are also able to produce heat by internal “shivering,” a process called muscular thermogenesis (mammals shiver for the same reason). The muscle-rich thorax is the heat-generator. Shivering the wing muscles before flight warms them up enough for the insect to take off (honeybee’s muscles actually work harder and produce more heat while shivering than they do when flying), and then flying maintains a higher body temperature. Thermogenesis effectively allows insects to make an end run around the limitations of cold-bloodedness. Check out Bernd Heinrich’s Thermal Warriors for surprising information about how these cold-blooded critters gain, lose and manipulate heat.