The BugLady is resigned to the fact that she’ll never hear a player on Jeopardy say “I’ll take Green Moths for $200, Alex,” so she would like to introduce you to three admirable moths that are outfitted in emerald. Butterflies and skippers make up only a tenth of the 174,250 (plus or minus) species of Lepidoptera that have been identified worldwide, so there are a lot of moths out there. Many are of the small-to-medium, gray-to-brown persuasion (the BugLady has a growing collection of pictures labeled “x moth 1, x moth 2,” etc in her files), but, the moth group also has some pretty spiffy members.

The Bad Wing (Dyspteris abortivaria) is an Emerald in the family Geometridae. Emerald moths occupy a number of different genera and have common names like the Showy, Red-fringed, Pistachio, White-barred, Cypress and Ocellate Emeralds, and the equally green Blackberry and Wavy-lined/Camouflaged Loopers. 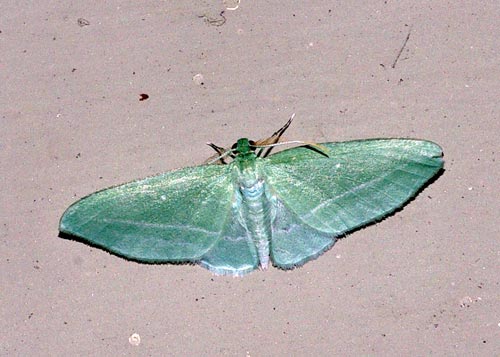 Bad Wings have a wingspread of about an inch. The wings, head, thorax and abdomen are green, and there are a few lines through the wings and a pale spot in each front wing. They like edges and woodlands from the Great Plains to the Atlantic where, according to the 1904 Report of the Minnesota State Entomologist, Bad Wing caterpillars roll up the leaves of grapes and Virginia Creeper, feed inside, and later pupate on the ground.

Caterpillars of the Wavy-lined Looper (Synchlora albolineata) chew bits of vegetation off of their host plants and stick the pieces to their backs after each molt (the BigLady has photographed this, but not well). In his write-up about the Wavy-lined/Camouflaged Looper in Moths and Caterpillars of the North Woods, Sogaard says that in the interests of camouflage, some emerald moth caterpillars are able to “change color or shape depending on the food plant.”

“Bad Wing?” According to the excellent bugguide.net, Dyspteris comes from the Greek dys, meaning bad or difficult, and pteron, meaning wing (the species name abortivaria doesn’t sound so good, either). The Bad Wing’s hind pair of wings is considerably smaller than the front pair, making it difficult for collectors to pin the moth correctly, hence “Bad Wing.” 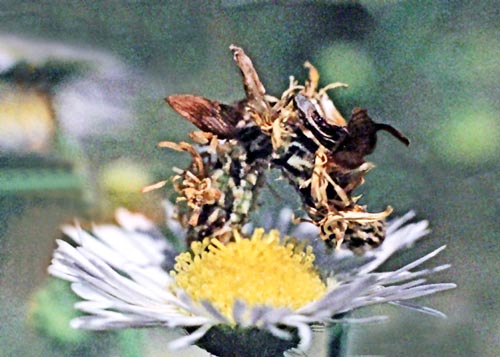 The Green Leuconycta Moth (Leuconycta diphteroides), a.k.a. the Green Owlet, is in the Owlet moth family Noctuidae, the largest family in the Order Lepidoptera with 35,000-plus Noctuids worldwide and about 3,000 in North America. Noctuididae includes familiar moths like the underwings, cutworms, and corn earworms (many Noctuid caterpillars make plant growers’ “Most Wanted” lists). Noctuid moths tend to be chunky and generally nocturnal; some family members are large and strikingly-colored, but most are not. Like the tiger moth family, all have a hearing organ (tympanum) on each side of the thorax through which they hear the radar signals of hunting bats (the BugLady could find no indication that they speak). According to Wikipedia, many Noctuid caterpillars are able to eat toxic plants without harm. 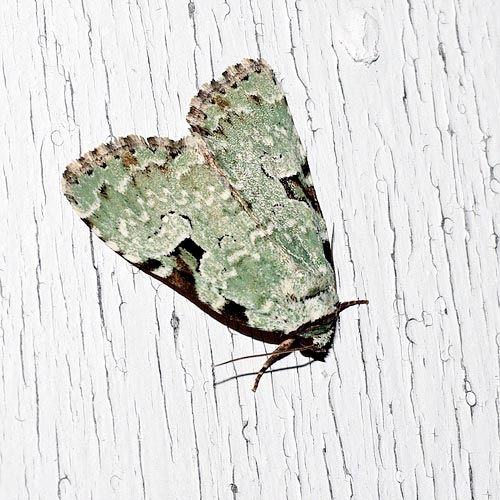 The GLM is found in fields in the eastern half of North America, where its caterpillars dine on aster and goldenrod. Some of its relatives are called “bird dropping moths,” for obvious reasons, but the GLM more closely resembles lichens.

Last, but not least, is the Green-patched Looper Moth, a.k.a. the Hologram Moth (Diachrysia balluca). The BugLady took its portrait back in 2008, reflexively, because it was sitting there (in poor light) and because it had an interesting shape, but then the picture languished in the “x-files” until a recent snowy day. The GPLM is also an Owlet moth (Noctuidae) and is the largest member of the subfamily Plusini. 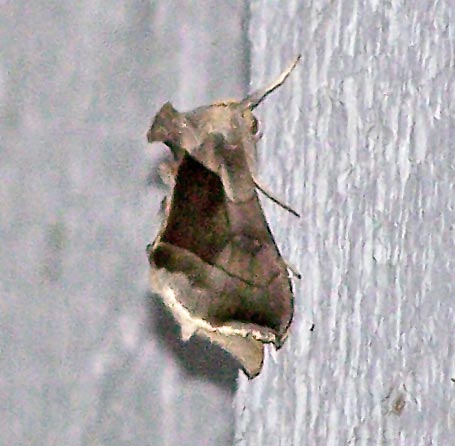 It’s a decent-sized moth with a wingspread of about 1 ¾”. It’s found in poplar stands and mixed forests across North America from Kentucky into southern Canada. Other than the fact that it is uncommon and its caterpillars feed on trembling aspen, wood nettle, and raspberry (and maybe some catalpa and wild orchids), the BugLady couldn’t find much biographical information about it (lots of picture sites and lists from museum collections, state parks, etc.).

What the BugLady did find was a close encounter between scientist and poet. The University of Alberta, Calgary Entomology department posts pictures and descriptions of many of the species in its collection. They have the GPLM listed as the “Large Brassy Plusia,” with a description that is a bit, well, pedestrian:

A large (4.3–4.8 cm wingspan) grey-brown moth with pointed, almost falcate forewings. The forewings have large patches of dull, metallic green over much of the outer two-thirds. The hindwings are grey brown and are unmarked. Unmistakable.

Your identification information is sorely lacking. It is not, as you describe “… patches of dull, metallic green …” It is covered in some of the most spectacular iridescent colorings ever seen in nature. Dependent on the angle of light, it can appear to be a bright metallic blue to green and to an amazing array of brassy and shiny silvers, coppers, and golds. It is perhaps one of the most beautiful moths in the animal kingdom. Some have even mistaken sightings of this moth for a shiny new coin seen from a distance. This is why admirers of this species have affectionately given it (and promote) the common name of “Hologram Moth”. Green-patched Looper Moth” and “Large Brassy Plusia” just don’’t do it justice. No doubt given these names from dead specimens observed at stodgy entomologists’ desks. Nor will any photographs ever do this moth justice. Until you see a live one in real life you will have no idea that nature could create such a spectacular marvel.

According to Sogaard, the shifts in brightness and color result from “the way light interacts with the microstructure of the cells.” See for yourself.

Side note: BOTW 5 is a 90 page working document comprised of a bunch of half-started episodes, preliminary “cut-and-paste” research, and “notes-to-self,” well-populated with scientific names and terminology, within which chaos the BugLady composes each episode. 90 pages of little red squiggly messages from Spell-check. The other day, Spell-check informed the BugLady that it was getting the vapors and would surely swoon unless she ran a complete spell check on BOTW 5. Right now. The BugLady didn’t, and it did. Spell-Check has left the building.