The Green Lynx Spider occupies grasslands, scrub, edges, gardens, and other open spaces south of a line from Maryland to California and well into Central America. Like other Oxyopids, GLSs have long, bristly legs, each ending with three claws, a tapering abdomen, and a flat face with eight eyes, six of which are large and are arranged in a hexagon. They have good vision and can see prey about four inches away. The GLS’s green body is broken by chevrons and its legs are spotted, increasing its camouflage factor. Some sources say that gravid females have the ability to change colors to match their background (though it takes about two weeks); others say this ability comes with age (which could amount to the same thing, since, for a spider, biology is destiny). Female GLSs may measure an inch in length with a 2 ¾ inch leg-spread; males are slightly smaller. 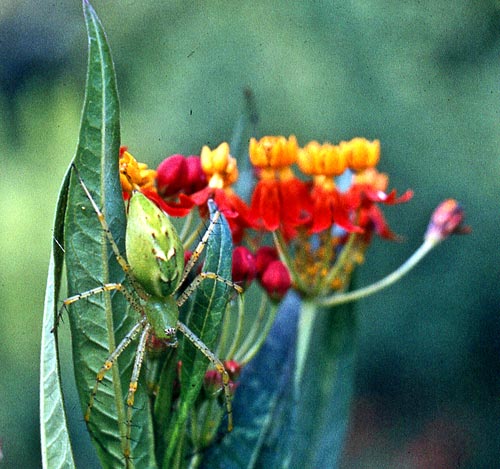 GLSs young and old (old being about a year) are, of course, lusty carnivores, enjoying a buffet of wasps, bees, moths, flies, bugs, and beetles that they encounter on vegetation. They’re often billed as biological controls of unwanted insects, though to a GLS, alas, a bug is a bug is a bug, and a corn earworm moth has the same food value as a honeybee.

Lynx spiders get their name from their hunting strategy. They eschew the elaborate trap webs that spiders are famous for and pursue their prey on foot, running from one leaf to the next and jumping, catlike, on their prey. One report said that they favor plants that are somewhat hairy because the hairs slow insects down and make them more catchable. GLSs lay down a drag line when they jump, and they have been observed hanging from the line, holding on with four legs and catching prey with the other four. They may also stalk their prey by sitting still in plain sight, sometimes balanced on their hind four legs with the front four held up, waiting for incoming insects (a pose that causes them to be compared to a praying mantis). They are diurnal (daytime) hunters.

They are lusty in other ways, too. As in other spider species, males court cautiously—for a spider, the line between love and lunch is a thin one. To announce his intentions, he drums with his palpi (plural of palpus , paired sensory organs located on the mouthparts) and does a little dance with his front four legs. Whether romance ensues or not is her decision. She touches his front legs with hers to signify interest and then bails, diving off a leaf, unfurling a line, and dangling there. He follows on his own line and they mate in mid-air.

She places her eggs in a silken egg sac that she constructs by night, and she attaches it loosely to a plant with more silk. GLSs are protective Moms that wrap their legs around their egg sacs for three or more weeks, guarding the egg sac from dislodging, the eggs from ants, and the 25 to 600 orange spiderlings from praying mantises.

The eggs hatch in about two weeks within the sac, but the first stage (the postembryo) has neither mouthparts nor spines nor functional eyes. Postembryos stay within the sac for another week or two before shedding and emerging as tiny but fully operational spiderlings, leaving behind an egg sac littered with empty skins. The GLS may even help her young to exit by slitting the side of the egg sac for them. Spiderlings stay together near the egg sac for a while before dispersing, often by “ballooning.” Adults die in the fall, but the young spiderlings survive the winter. For the GLS, egg-guarding is a trade-off—according to research done by L. Fink, a GLS that does not guard her egg sac may produce more eggs (a second brood), but a GLS that does guard increases the survival rate of her young.

Humans have been bitten by GLSs, uncommonly. The bite produces localized symptoms like burning, itching, and swelling but is not dangerous. When threatened, GLSs have another trick up their spiny sleeves—the ability to spit venom, and they are apparently the only spider outside the Spitting spider family (Scytodidae) to do so. Venom is expelled from the chelicerae, the hollow mouthparts that spiders also use to handle prey. People who have experienced it say that the liquid feels cool on the skin, tastes bitter (of course someone tasted it), and is highly irritating to the eyes (one account referred to “moderately severe chemical conjunctivitis that lasted for two days.”).

The GLS, says Thomas Eisner in Secret Weapons, “when directly disturbed, as when it is seized by the leg with forceps, revolves the body so as to face the assaulting instrument, and discharges a jet of venom from the fangs. The fluid is ejected with considerable force and may range a distance of 20 cm [8 inches]. Nothing is known about the defensive effectiveness of the spray, and it remains unknown whether the spider uses the spray only in response to direct assaults or also preemptively, as possibly when approached by a bird. So far as is known, lynx spiders also use their fangs in the usual fashion, for injection of venom into prey.”

Venom-spiting is not used by the GLS to capture prey, though there is a Wisconsin spider that does catch its food by expectorating. According to Weber in Spiders of the North Woods, the Spitting spider (Scytodes thoracica) spits venom and sticky web over its prey in “a fast back-and-forth pattern that not only captures the prey but attaches it to the substrate.”