This is one serious wasp. At almost 1 ½” long (males are smaller), she gets your full attention when she’s browsing a nearby flower top. The Great Black Wasp (GBW) is decorated at one end by heavy-duty mandibles that allow her to hang onto her prey and, toward the other end, by a narrow constriction/stalk at the top of a stinger-tipped abdomen. She is a semi-gloss black, her legs are aggressively spiny, and she often folds her wings flat over her abdomen. She is also called the Katydid Hunter and Steel-blue Cricket Hunter (the latter name is shared with a smaller wasp species) and is one of a family of solitary, hunting wasps. BugFans can enjoy GBWs in mid-to-late summer, in fields and meadows throughout the U.S. except the Pacific Northwest. 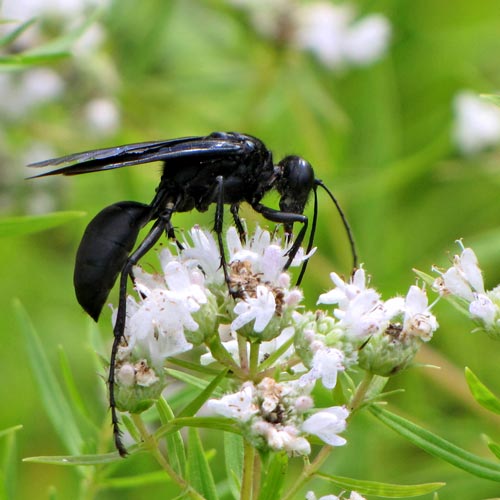 Solitary wasps make egg chambers and provision them with meals for their soon-to-be-offspring. The GBW (Sphex pensylvanicus), specializes in catching members of the long-horned grasshopper family like angle-winged and bush katydids, many of which are larger than the GBW herself (for her efforts, she gets a “thumbs-up” from the Pest Management Professionals) (really!). She catches, stings, and paralyzes her prey but doesn’t kill it (no dry, decaying chow for her kids!). She is, in turn, the target of a small, parasitic wasp. Her young are carnivores, but she feeds on nectar and is an important pollinator.

GBWs dig tunnels in soft soil. Though they are not social insects like honeybees, they will tolerate the tunnels of other GBWs close by. The males, which are territorial, like to set up shop near a good nesting area. When they are not sipping nectar or basking in the sun, males spend most of their time airborne, chasing off other males and trying to hook up with females. Alas, some males get so carried away pursuing each other that they take their eyes off the prize and don’t mate. Fertilization is a male’s only contribution to the next generation.

Using her mouth to loosen the soil and her legs to rake it, a female compacts a lump of dirt, tucks it under her chin, holds it there with her first set of legs, walks it to the surface with her other four legs, and deposits it in a heap. Her tunnels are long, with multiple egg chambers. When she brings a katydid to the tunnel, she drops it at the entrance, goes inside, and inspects the tunnel. The theory is that she enters the tunnel “empty-handed” so that she is free to defend her turf against interlopers, and interlopers there are! A number of insects, including her sister GBWs, will try to swipe some katydids or take over her tunnel. Satisfied, she reemerges and drags her prey to an egg chamber. Scientists tried moving her prey a few inches while she was underground. She found it easily enough and brought it back to the opening, but her wiring is such that she had to start her inspection tour all over again.

When a chamber passes muster, she places an egg on the underside of the thorax of one of her victims and closes the chamber, and eventually, the whole tunnel. She fills it by alternately pushing in some soil and then tamping it down. She may use her head alone to compact each addition of soil, but a GBW will often pick up a small leaf, pebble or piece of twig, place it on the loose earth, and press her head on it. With or without the tool, she vibrates her abdomen as she pushes—a mini jack-hammer. She may discard the “tool” or re-use it. 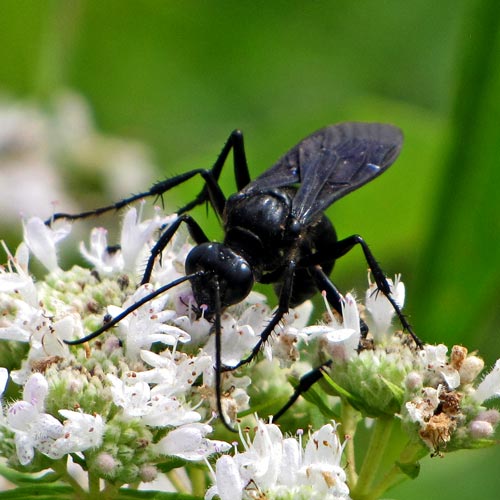 After an egg hatches, the larva spends about 10 days raiding the pantry and then pupates in the tunnel through the winter. The BugLady could find no account of the dynamics of the adult wasps exiting the tunnel in the following spring.

John Bartram, an early botanist, was one of a remarkable group of naturalist-explorer-observers on the colonial American scene. Bartram, his son William, Constantine Rafinesque, and Peter Kalm had a ravenous curiosity about the plants, animals, geology, geography, and weather of America and about the peoples, native and new, who inhabited it. They traveled the frontier and they wrote, and their writings are gold for natural history/history geeks. Bartram’s description of the GBW was presented to the Royal Society in London in 1749—the first accepted account of a New World insect authored by a New World scientist.

Each egg chamber requires several prey items, so katydid-hunting takes up a significant amount of the GBWs time. Alas, the hardworking GBW gets no respect. It is common for a female to be headed for her tunnel, prey subdued and “in hand,” only to have it pirated by a bird! This kleptoparasitism (triple word score), defined as “one organism stealing prey from another,” is in this case most commonly practiced by English/House Sparrows (Passer domesticus) and Catbirds (Dumetella carolinensis) who take advantage of the deliveries of large insects to busy “aggregate” nesting sites (the more successful the sparrows are, the more sparrows are attracted to the site). Undeterred, the GBW goes off and hunts again, but the thievery ups her energy investment considerably.

Lots of internet hits are of the “Wow!-I-saw-a-huge-wasp-What’s-that-big-wasp-Does-it-sting-How-do-I-get-rid-of-that-big-wasp” variety. She does have an impressive stinger, but does she sting? “Yes,” says the renowned Mr. Bartram. “Painfully,” but he assures us that the sting doesn’t swell like stings of other wasps. Honeybees and social yellow jackets and paper wasps sting to defend their nests and young. Solitary wasps are a lot more mellow. They may fly around looking anxious if you approach their tunnel, but you have to work to get stung. In their Field Guide to Insects of North America, Eaton and Kaufman say that the solitary wasps are “Perhaps our most undervalued insects, many are gentle and colorful.”