There are a number of wildflowers that the BugLady stores in her mental “Texas Wildflowers” file because even though they occur elsewhere, she first saw/photographed them in Texas. So, when she photographed this Gray Hairstreak in New Jersey, she put it in her “Butterflies of the East” file, but it doesn’t really belong there. Gray Hairstreaks are, in fact, the most widely distributed American hairstreak, and they spill over into Canada, Central America, and the northern edge of South America.

That being said, there are plenty of places, especially in the northern half of that huge geography, where they are present but not common, or are present some years and not others. They’ve been seen in more than half of Wisconsin counties but are rated as “uncommon” at the excellent Wisconsin Butterflies website).

Why “hairstreak?” These small butterflies in the family Lycaenidae and the subfamily Theclinae have one or two slim (hair-like) tails on the lower “corner” of each hindwing. Some species also have Technicolor, false eyespots near the base of each tail. 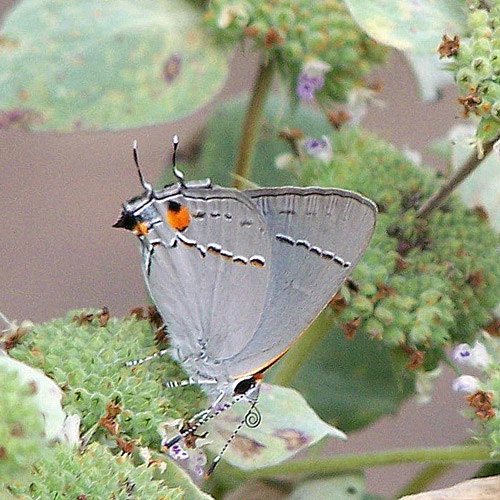 What’s the point? Many Lepidopterans have spots on the upper surface of their wings, spots that look like big, owl eyes that startle predators as the butterfly/moth flies away. A hairstreak’s trickery happens when it’s perched, with wings folded. Its eyespots and antenna-like tails are designed to fool predators into thinking that the butterfly’s head is where its tail is. Hairstreaks even add a behavioral component – a nectaring hairstreak often moves its hindwings up and down, simulating the movement of twitchy antennae. A butterfly that loses a chunk of its hindwing can survive, but a butterfly that loses its head – not so much.

Researcher Dr. Andrei Sourakov at the University of Florida suggested that while birds (and maybe lizards) are fooled by this display, it also provides a good defense against jumping spiders – sharp-eyed ambush hunters that ply the flower tops. Jumping spiders, which usually grab the front end of a butterfly and inject venom into the thorax, attack the hairstreak’s false head and find no torso beneath to inject.

Gray Hairstreaks (Strymon melinus) (melinos means “ashen”) are not fussy about where they live – they’re happy in open spaces, parks, road edges, grasslands, gardens, and weedy, disturbed areas, often quite dry; they’re not fussy about food, either (BugFan Tom just passed along the wonderful term “catholic victulators”). This flexibility in diet and habitat explains their wide distribution. Adults nectar on a variety of plants with short, tubular flowers, like composites; and the caterpillar food list includes almost 200 species in about 20 plant families, especially peas, clover, cotton, hops, and mallows. They are what the Butterflies of Massachusetts website calls “Switchers” – butterflies that broadened their palettes when the European settlers brought Old World crops to the New World. Young larvae feed in/on flower buds and developing fruits; older larvae may feed on leaves, and they have sometimes been a problem for bean and cotton growers (in cotton country, the caterpillars are called “cotton square borers”).

These lovely butterflies are small, with wingspreads of around 1 ¼”. Males and females are similar, but females’ forewings are wider and rounder. Their upper wings are gray-blue, and they perch with their wings spread more often than other hairstreaks do. Here’s a glamour shot, and a Gray Hairstreak gallery. 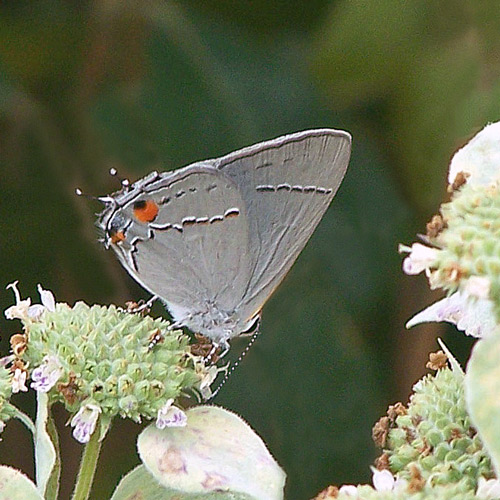 Males are territorial and feisty, spending their afternoons perching on vegetation, checking out any intruders, and watching for willing females. The Animal Diversity website says that “Mating pairs are normally spotted at night, and females oviposit during the midafternoon.” Females lay eggs singly (rather than in clusters) on the flowers, flower buds, young fruits and nearby leaves of a host plant. The caterpillars are greenish at the start, but older individuals range in color from gray to pink. Here’s a nice life cycle series.

Quick Science-y detour: Gray Hairstreak larvae are myrmecophiles (ant-lovers) – often tended by ants – an arrangement that is not uncommon in the Lycaenidae. Ants harvest a sweet liquid from the caterpillar’s dorsal nectary organ (“honey gland”) and in exchange may protect them from predators (one source says that when searching for the well-camouflaged Gray Hairstreak caterpillars, it’s easier to look for the attendant ants instead). The honey gland is located on the caterpillar’s seventh abdominal segment, and there’s a “tentacle organ” on the eighth segment that emits a chemical that gets the ants all riled up and defensive because it’s similar to an ant alarm pheromone. Larvae of many Lycaenid species also communicate with ants via ant-like sounds (clicks and hums) or by sending vibrations through the substrate; tropical biologist Philip DeVries calls them “singing caterpillars.” An alternate explanation for this communication and honey sharing is that it deters the ants from preying on the caterpillars.

There are two broods in Wisconsin, starting late April/early May, and four, spanning most of the year, in the south. Say Douglas and Douglas in Butterflies of the Great Lakes Region (2005), “Individuals from the spring brood are on the average smaller and darker than those from the summer brood.” Those darker, smaller individuals may absorb heat better during the cool, early months of their flight. The final generation of the year overwinters in a sheltered spot in the chrysalis stage.

But not in Wisconsin (at least historically), because it is unlikely that a Gray Hairstreak chrysalis could survive the polar vortex. About Iowa, tropical enough to produce three broods each year, Schlicht, Downey, and Nekols (Butterflies of Iowa, 2007) tell us “Given the dearth of collections before mid-June, it seems likely that this species simply cannot overwinter in Iowa”. So, where does that first generation come from? Some sources say definitively that the Gray Hairstreak is not migratory. Period. Others say that the early individuals we see in the northern part of their range have flown in from the south to establish small colonies, except in the years when they don’t. Douglas and Douglas again – “It is likely that this species is highly vagile – capable of migration throughout its range.”

A Butterflies of Massachusetts analysis shows that Gray Hairstreaks are appearing earlier in spring today than they were 150 years ago and concludes that climate change will probably not be a problem for it.

Meanwhile, we need a much better name for this exquisite butterfly. “Gray hairstreak,” while literally descriptive, just doesn’t do it justice.