A recent BOTW featured a European katydid that has found its way to our fair shores. Today we celebrate two American fruit flies that are sunflower specialists, the Sunflower maggot fly and the Sunflower seed maggot (“maggot” is simply a specific term for a fly larva), one of which has become an unwelcome immigrant to the Old World. Wings across the sea.

Say “fruit fly” and the picture that pops into many heads is that of a small, red-eyed fly (Drosophila sp.) that:

That’s the other “fruit fly.” The Drosophilidae, better known as vinegar flies and pomace flies (pomace is the solid stuff at the bottom of the vat after grapes, olives, etc. are pressed/stomped—the soggy stems, skins and seeds), seem to have appropriated the name “fruit fly” (there’s a BOTW for that), but that name rightfully belongs to the Family Tephritidae. To make life even more confusing, because of the patterns on the wings of many species of tephritids, (most drosophilids have un-patterned wings), they are often called peacock flies and picture-winged flies, but “picture-winged fly” was already in use by yet another family of small flies.

So, about the (true) fruit fly family Tephritidae. There are about 4,500 species worldwide, with some 300 of those in North America. The decorated wings play a part in courtship and maybe in aggressive or anti-predator behaviors. There is speculation that the striped bodies of some Tephritid species mimic wasps and that the wing markings of other species resemble the legs of the jumping spiders that prey on the flies; when a fly waves its wings at a spider, it looks like aggressive leg-waving by another spider. Tephritid larvae feed in the flower heads or on other soft tissue of plants, and some are gall-makers. Some are pests of agricultural plants.

While the BugLady was taking pictures in the prairie in mid-June, she kept seeing these small (1/4”), bristly, jumpy, corpse-like flies under the leaves of the wild sunflowers. Turns out that they are Sunflower Maggot flies (a common name that is, of course, shared with two other semi-related flies). This SMF (Strauzia longipennis) (“long quill/feather”) is found in sunny places throughout North America. It varies in appearance tremendously across the continent, and because some geographical groups seem to be changing not only in appearance but in the way they use their various host plants, scientists speculate that new species may be developing before our eyes.

SMF eggs are laid in late spring in plant stems of members of the aster family. The eggs soon hatch, and the creamy white, headless and legless larvae feed on the pith in the stem for a month or more. Some sources say that a larva overwinter as a pupa in the ground near its host plant, and others say that it overwinters as a larva in leaf litter and completes its transformation in spring. There is a single generation per year.

SMFs are on our radar because one of their host plants is the domestic sunflower, where their tunneling potentially weakens the flower stalk and where they can introduce fungal infections. But despite the fact that they can be found a large percentage of domestic sunflowers, most of the resources said that SMFs are generally not considered serious pests—seed yield and seed quality are unaffected.

However—the first European sightings of this American fly were in Germany in 2010. There are some big sunflower-producing areas in central Europe, and there the SMF is being carefully watched, since it didn’t bring its natural enemies along with it.

Also along for the ride is the Sunflower Seed Maggot (Neotephritis finalis), another Tephritid that’s about the same size as the SMF. The SSM (by the way, the BugLady frequently Googles the acronyms she assigns to bugs, lest she be inadvertently offensive, and both SMF and SSM have multiple meanings in scientific, religious, political, geographic, military, medical, economic, entertainment, and organizational (Scottish Miners’ Association spheres)—the SSM is the only member of its genus in North America, and it’s considered one of the most widely distributed tephritids on the continent. 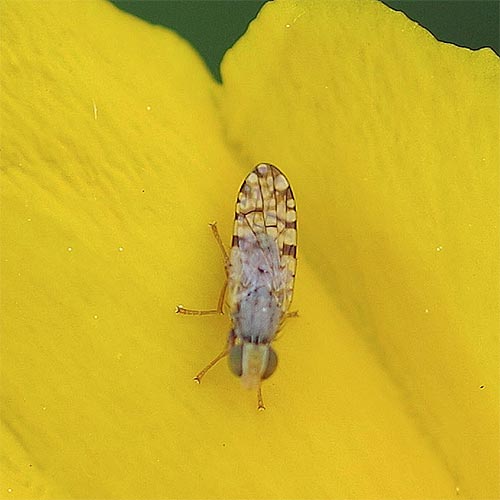 Females spend a lot of time on flower heads of wild and “tame” plants in the aster family, probing and ovipositing. Eggs are laid deep down in between the florets (small flowers) (remember–“flowers” of the Aster family, formerly called the Composites, are actually a whole bouquet on a stem. The structures that we are tempted to call petals are separate flowers; a daisy consists of a circle of white ray flowers surrounding a mass of yellow disc flowers). Anyway, the SSM embryo develops “heads-up,” but just before it hatches, it does a U-turn, feeds on some material in the egg, and then tunnels down into the developing seeds to feed. It eventually pupates there in a cell made of frass (bug poop). Despite their concealment, the larvae are parasitized by the larvae of tiny wasps. Unlike the SMF, the SSM has several generations during the growing season, especially in the southern part of its range, which means that it’s gnawing at seeds all summer.

It is considered a pest in sunflower-growing operations, but one that can be managed easily by planting in late rather than mid-spring.

Tiny as they are, some interesting behaviors have been observed in SSMs. Those flashy wings are used in courtship displays, during which the male flashes his wings up and down like semaphore flags. When males fight, wing flicking can escalate into head-butting. Females also make butting motions toward intruders like ants (which ignore them), but overall, they are a peaceable species, preferring resting and grooming to combat.