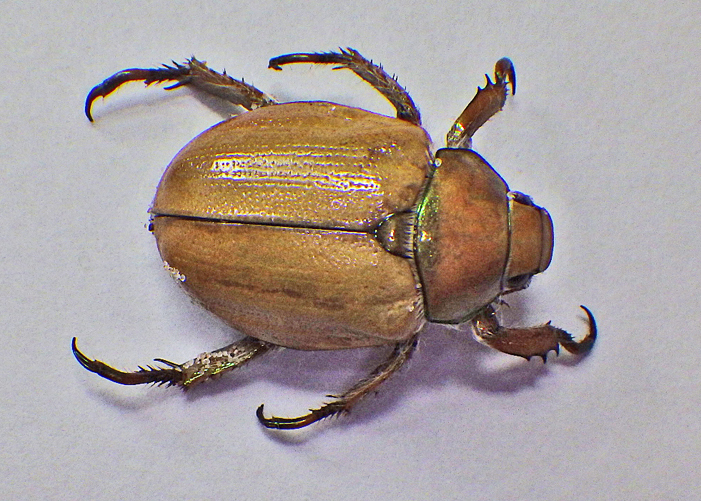 The BugLady found this beetle recently (what’s left of it anyway) on what remains of her dune (not much, after the winter storms) (sadly, her Doodlebug Refuge was mostly washed away, and this year houses just a single resident). Something else found the beetle first and ate its innards, making a big hole in the underside of its abdomen in the process, and so it goes.

The Gold/Goldsmith beetle is a relatively uncommon member of the scarab beetle family Scarabaeidae (beloved of the Egyptians) and is in the subfamily Rutelinae (the Shining Leaf Chafers). Scarabs are sturdy, shiny, often-colorful beetles with front legs adapted for digging and with antennae tipped with “stacks” of leaf-like plates that they can fan out to pick up chemical signals or tuck out of sight. Some scarabs are pretty spectacular https://bugguide.net/node/view/21082, and https://bugguide.net/node/view/73330, and https://bugguide.net/node/view/11561/bgpage. There are 1,700 scarab species in North America and 28,000 worldwide. Both the larvae and adults of some species are considered pests (the infamous Japanese beetle is a scarab), but other species are decomposers that are important members of their local food webs. Many are nocturnal or crepuscular. 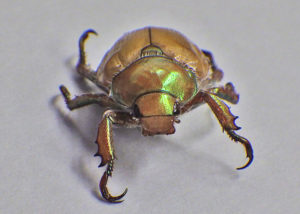 The BugLady found two good sources of information about the natural history of Goldsmith beetles – the awesome and copiously-footnoted contemporary University of Michigan Animal Diversity Web (ADW)/Biokids series, and a wonderful journal article from the 1860’s by Samuel Lockwood, who wrote their biography. There wasn’t much in between, other than a whole bunch of picture sites.

Except for the Northwest, the six members of the genus are spread over the whole continent. Cotalpa lanigera is the only species found in the “East” (from the Canadian Maritime Provinces to Nebraska and Texas); the rest live in the southwestern US. They like grasslands and deciduous woodlands.

They’re about an inch long, oval, and bulky, and they come in shades of yellow gilded with a metallic sheen. In 1868, the Reverend Samuel Lockwood described them more generously: “Among the Beetles of North America, very few can bear away the palm for beauty from the Cotalpa lanigera, or, as popularly known, the Goldsmith Beetle. This insect holds no ignoble place in the Coleoptera, being a member of the family Rutilidae, or the golden-gleaming ones. Indeed, Madam Cotalpa has long been an acknowledged belle among the Rutilians, themselves a distinguished family in Beetledom. No artist can vie with the gorgeous effect produced by the metallic tints of the Cotalpa’s dress. Who has not seen the maiden sporting in a silken attire of but one color, which with every motion in the light became suddenly lustrous with beautiful hues. Almost a monochrome, yet the garb of the Goldsmith beetle presents a rich diversity of tints, chiefly of the yellow sorts. The wing-cases are a gleaming lemon, thus making the whole back appear as if encased by two large plates of paly gold, while the thorax and head are each covered with brilliant red gold, which in the light gives off an almost flaming hue. “The legs are brownish yellow, or brassy, shaded with green.” The under part of the insect is a sheet of highly polished copper, from which stands forth a thick coat of “whitish wool,” justifying its specific name lanigera, wool-bearer. It is pleasant to see how from such a seeming paucity of color, Nature has begotten in this insect such a richness of results.” 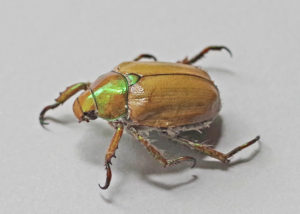 The genus name, Cotalpa, is Latin for “with a mole,” probably a reference to the fact that this species spends much of its life underground, even as an adult. Eggs are placed on the soil, and the newly-hatched larvae feed within rotting logs or underground on tree roots (they’re beneficial soil-aerators). Larvae feed for a year or two and then pupate in cells they make deep in the earth. They emerge from their pupal cases in fall, but they stay below decks in a state of suspended animation until the soil warms in spring; both the larvae and the newly-emerged adults escape freezing by staying at least 15” underground. Says the Reverend Lockwood, “The Goldsmith beetle is very short-lived. It is likely that the female lays her eggs in the ground in June, which month usually sees her for the last time. Their life I hardly think is given to much mischief.”

In late spring and early summer, adults feed from dusk till dawn on the leaves of willow, poplar/cottonwood, oak, hickory, and some maples. They often pull leaves off of trees as they feed, which annoys homeowners, but they usually live in woodlands where there are plenty of trees. The Reverend Lockwood tells us that “For the double purpose of concealment from enemies and comfort of shade, it will draw-together a couple of leaves, holding them by the sharp tiny hooks or grapnels on its feet. Of sluggish habits and but low instincts, it quietly nestles in its improvised arbor all the long summer day.” Their shiny surface is said to afford some degree of warning coloration to predators, but their food sources aren’t especially toxic, and songbirds routinely ignore the warning. 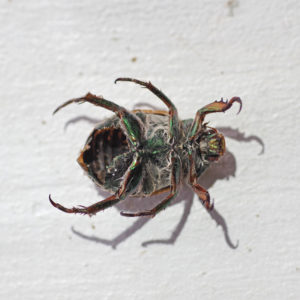 They probably court via pheromones, and Goldsmith beetles also communicate with sound, rubbing a ridged portion of their body with their legs.

This species may – or may not – have been the inspiration for Poe’s story “The Gold-bug.”

The BugLady highly recommends the 1868 article by Lockwood for its style and for its insights into the gloriously curious mind that was determined to discover the secrets of the Goldsmith beetle.