Giant Water Bugs (GWBs) are “true bugs” in the order Hemiptera and the family Belostomatidae. They are large, brownish, flat, roughly oval insects with impressive front legs. GWBs come in several sizes; the BugLady originally learned them as the “Smaller” GWBs (genus Abedus), about 1 1/2″, and the “Giant” GWBs (genus Lethocerus and Benecus) which, at 2 1/2+”, dwarf their smaller cousins. In her venerable The New Field Book of Freshwater Life, Elsie B. Klots reports that a hand-held GWB may squeak a little and may smell like apples. More about that “hand-held” idea later.

GWBs are “climber-swimmers” that live in quiet, shallow waters with plenty of vegetation. They hang head down on aquatic plants, close enough to the surface so that they can reach it with the short, retractable breathing tubes that protrude from the tip of their abdomen. They use the tubes to pull atmospheric air into their tracheal system; additional air, for use on longer dives, is stored in a space under their wings. They capture their prey with their front pair of legs; the second and third pairs of legs, flattened and fringed with hairs that effectively increase their surface area, are adapted for swimming.

Female “Giant” GWBs of the genus Lethocerus lay their eggs on vegetation just above the water line and then the male sticks around to guard them ferociously, climbing up the plant stem to shield them from predators and bringing water to keep them moist. A female may lay 150 eggs in her lifetime, but predation and cannibalism will account for most of them. The book Water Insects, by Sylvia A Johnson, has astounding photos of these egg masses and of newly-hatched nymphs. For males of the other two genera, eggs come as “carry-out”—females glue as many as 100 eggs on his back and then cruise off to find another partner with less “baggage.” Mr. Mom spends the next week or two protecting the eggs, exposing them alternately to water and air, and stroking them with his hind legs. This stroking may be a way to keep water circulating over them, but an alternate explanation is that he is scraping them gently to clean off a fungus that is lethal to the eggs. 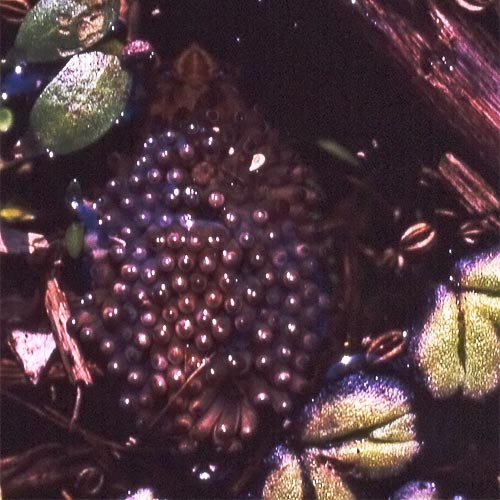 Like most other aquatic true bugs, both immature and adult GWBs are classified, niche-wise, as “piercer-predators,” a politically correct way of saying that they grab their prey, stab it with a short, sharp beak, and inject poisonous enzymes (produced in salivary glands near the beak) that immobilize it and then liquefy its innards so the GWB can slurp them out with gusto. They grab their prey as it swims past, or they actively pursue it. The largest of the GWBs will attempt an astonishing range of prey, including other aquatic insects, small frogs, fish, tadpoles, small snakes, and even little fuzzy ducklings.

Stories of their voraciousness are legend:

Ducks and herons eat GWBs, and the BugLady saw a show on PBS in which people in the Orient dipped them in batter and deep fried them (a batter-fried bug with six batter-fried legs hanging down) (entomophagy again).

The nickname “Toe-biter” suggests the nature of their relationship with humans. While GWBs (generally) are not “attack-insects,” they don’t back down from a confrontation, either. If mishandled, they will stab their handler. Very painfully. When the BugLady explains this to kids she is scooping aquatic critters with, some kid always asks if the enzyme would dissolve your thumb—like you would hang onto it that long. A friend who is a naturalist told the BugLady about explaining the same “facts-o’-life” to a school class. None of the kids tempted fate, but one of their adults did. Ice cubes were required. Their other nickname is “Electric Light Bug.” They have wings and are strong, nocturnal fliers that are often attracted to lights at home and in parking lots. When the BugLady finds one on land, she picks it up (gingerly) by the end of its abdomen, puts it in a jar or paper cup, and transports it to water (Beware: they may play possum when handled and will later revive to surprise their over-confident captor).

Just when you thought it was safe to go back in the water!