Life is hectic, so the BugLady decided to post a rerun. “Minor tweaking” turned into (no surprise) a massive rewrite, so here’s an episode from the summer of 2008, with many new words and some new pictures.

When the BugLady was in high school, a friend found an ovipositing Cecropia moth and gave her a twig with 9 pale eggs on it. The eggs hatched into tiny, black fuzzy caterpillars, and the BugLady kept their cage—a seven-inch-wide cylinder of window screen fastened to a block of wood and topped by more screen, it doesn’t have to be fancy—full of food and empty of frass (a reasonable housekeeping philosophy, overall) and they grew and prospered. After a while she noticed that although food was not a limiting factor and escape was unlikely, the nose-count was decreasing, and in the absence of actual carcasses, she suspected that they were cannibalizing each other. Ultimately, a single caterpillar remained, and it spun a cocoon.

Cecropia, Promethea, Polyphemus and Luna moths are members of the Giant Silk Moth family, Saturnidae, and some are giants indeed, with wingspreads measuring 4” to 6” (there are classic Greek myths behind those names, and Saturnia, too, so dust off your old Edith Hamilton mythology book from freshman English and look ‘em up). There are smaller members of the family, including the Buck moth, of previous BOTW fame.

Saturnids are distantly related to the Oriental moth that is used in silk production; some Asian and South American Saturnids are semi-domesticated and the silk spun by their larvae is harvested. North American silk moths aren’t used to make silk, although the BugLady has read that cocoons have been unraveled by people desperate for leaders for fishing line. The highly successful, invasive gypsy moth, in the tussock moth family, was originally imported to test its feasibility as a silk producer.

The old Lepidopterists’ adage that “The more homely the caterpillar, the more spectacular the adult” does not apply to the Saturnids, which have astonishing offspring. Northern species tend to have a single brood per year, while their Southern brethren may have two or three. Wherever they are, Saturnids overwinter as pupae in a state of diapause or suspended animation—they pupate in fall but their transformation into adults doesn’t begin until spring. The caterpillars are large/huge—up to four inches long, and often have spiny tubercles, (which, except for the Io moth caterpillar, are harmless to the touch). Luna and Polyphemus caterpillars can make a clicking sound with their mouthparts to warn predators; the next step is regurgitation of a nasty substance. Caterpillars feed on the leaves of a wide variety of trees and shrubs, and a few are serious defoliators.

The fancy antennae sported by Saturnid males allow them to detect “come hither” pheromone signals emitted by the females. He can zero in on her from more than three miles away, his antennal receptors picking up her “perfume” even when it has diffused to only a few molecules, and following it into the higher concentrations where she is. Saturnids typically fly at night. Giant silk moths, having no gut and only vestigial mouthparts, live to reproduce, and the lipids that they store as caterpillars nourish them as adults. Adults are fed upon by Screech Owls and bats; caterpillars have a number of parasites; and woodpeckers extract pupae from their cases. Some species, especially the Luna and Cecropia moths, are parasitized by alien tachinid flies (of previous BOTW fame) that were imported to control gypsy moths but find the slow-moving Saturnid caterpillars easy prey.

A Cecropia caterpillar (Hyalophora cecropia) that starts off tiny, black and bristly, progresses to small, yellow and bristly, and ends up as an astonishing, pale green creature that’s the size of your thumb and decorated with non-toxic, Technicolor knobs (though the caterpillar itself contains both a toxin and an antibiotic). An alarmed Cecropia caterpillar may thrash about, releasing droplets of its poisonous “blood,” which may cause topical irritation and a runny nose and eyes. It eats a wide variety of tree leaves including box elder, ash, apple, maple, willow, poplar and dogwood (the BugLady fed hers lilac and has photographed them on willow and box elder). 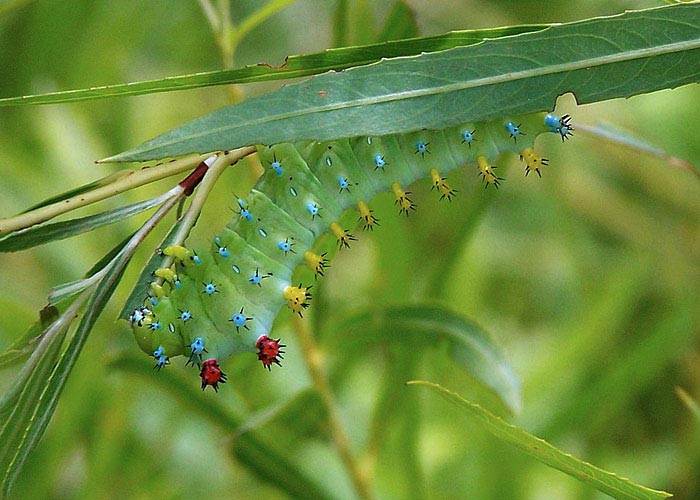 Its gray, spindle-shaped cocoon is spun on a branch or at the base of a tree trunk. Several layers of tough silk, with air spaces in between, insulate the pupa from abrupt temperature changes during its transformation, and small birds and mammals might feed on it during winter. A researcher in the Southeast distinguished between silken cocoons that were “baggy” and those that were taut, the author had noting that the spinners of baggy cocoons endured prairie burns and survived to emerge as adults. 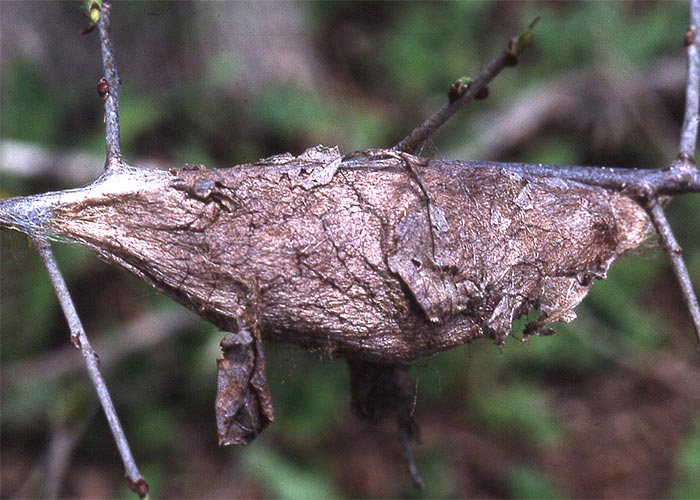 With wingspans of four to six inches and more, Cecropias are the largest moth in North America. They are found east of the Rockies and north of the Rio Grande in open areas with the caterpillar host plants nearby. There can be some regional differences in appearance, and the Cecropia hybridizes with the Columbia moth in part of its range. Sexual dimorphism exists in both adults and pupae, where females may be larger. 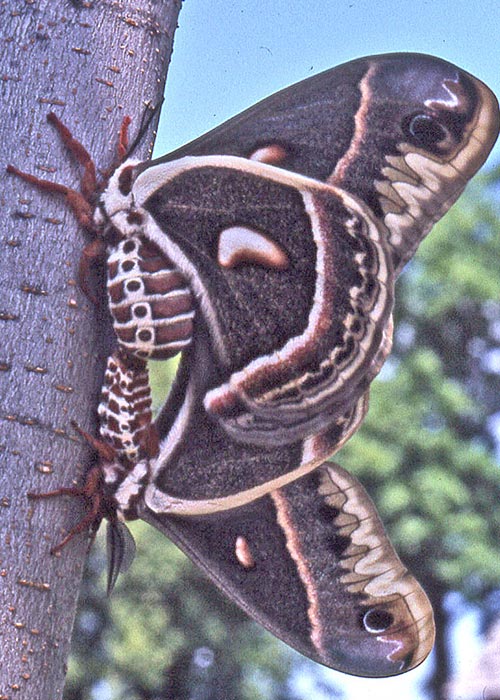 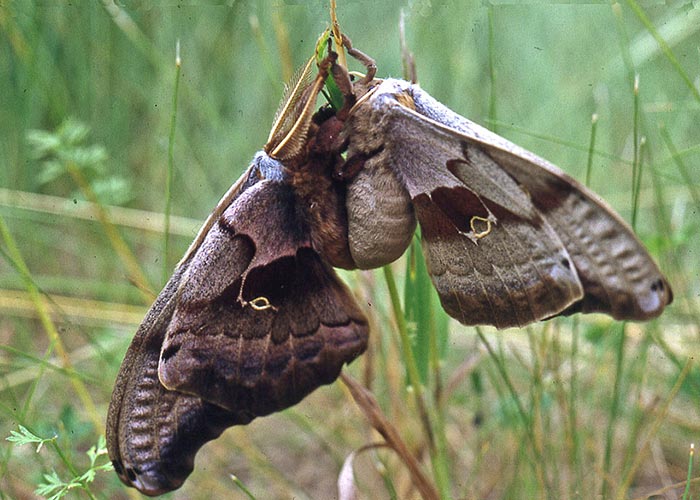 Polyphemus Moths (Antheraea polyphemus) are found in woodlands, urban/suburban areas and wetlands throughout North America. They are slightly smaller than Cecropias and relatively unmarked, but in honor of the one-eyed Cyclops (look that one up, too), they have a single eyespot in each hind wing. When alarmed, they flick their wings to expose the eyes more dramatically. In the picture of the happy couple, the smaller male is on the left (check out his antennae); the female, her body large to accommodate egg-laying, is on the right. 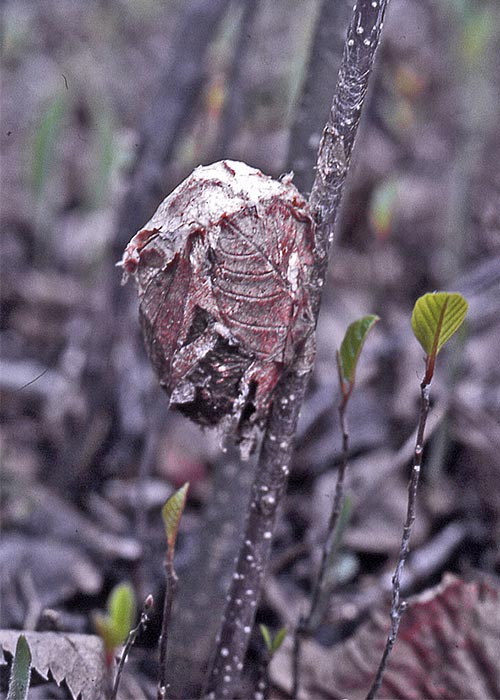 The caterpillars eat the leaves of apples, cherries, oak, maple, grape, willow and more. They hide the evidence of their meal by severing the leaf’s petiole after feeding on it – no half-chewed leaf to attract the eye of a predator. According to Wikipedia, a caterpillar consumes 86,000 times its original weight in leaves during the two months between hatching and pupation. Their cocoon incorporates a leaf of their host tree, sometimes attached solidly to a twig, and sometimes dangling and eventually falling to the ground to rest in the leaf litter. Squirrels can be serious predators of Polyphemus caterpillars. 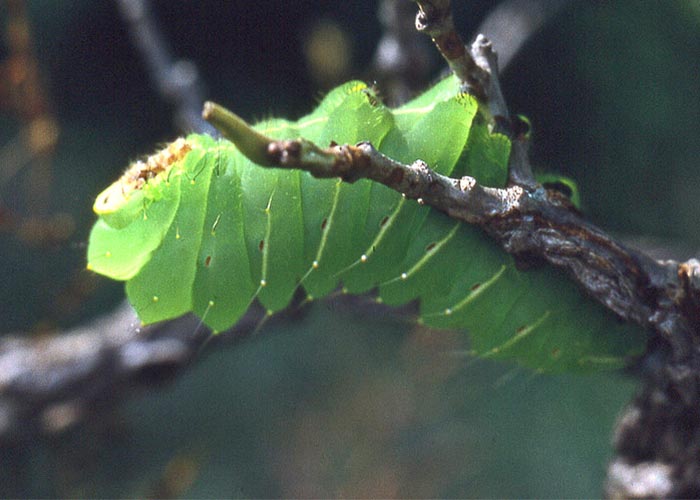 Promethia moths (Callosamia promethea) are found in woodlands from the Atlantic to the Great Plains. The caterpillars bear a family resemblance to Cecropias (but lack the row of paired, plain yellow knobs) and also eat lilac and forest trees like ash, cherry, basswood, birch and maple, although populations may become food specialists, regionally. When it’s time to pupate, Promethea caterpillars reinforce the attachment of a leaf to its host plant, fold the leaf around themselves and then spin a cocoon inside. The “inside-the-leaf” part is a good camouflage strategy; the “only-leaf-left-glued-on-the-tree” part, not so much. 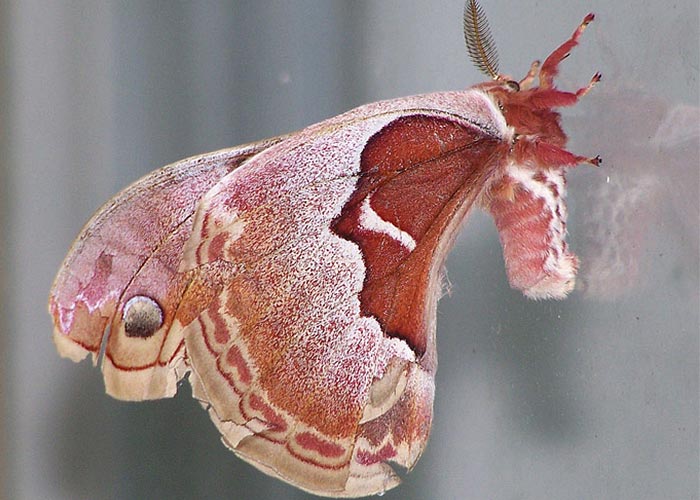 Adult male and female Promethea moths exhibit strong sexual dimorphism – the male is dark brown and the female is reddish and can be mistaken for a small Cecropia. 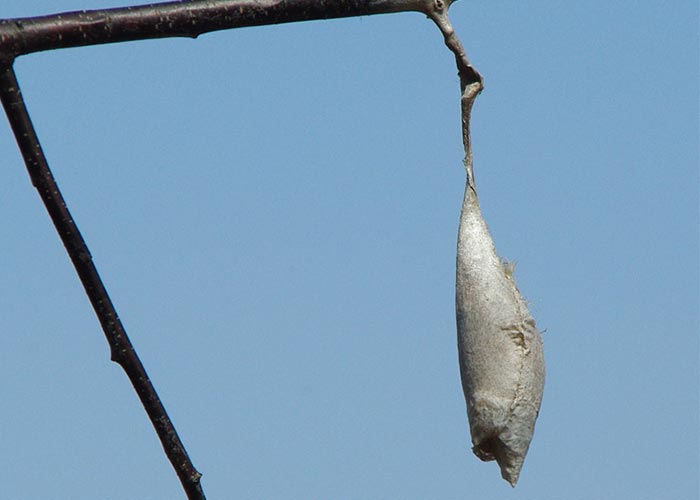 What an improbable moth! What an improbable moth for our less-than-tropical landscape! The LUNA MOTH (Actias luna) lives in North America, east of the Great Plains. It has swallowtails, a wingspan of 4 ½” and a small, transparent eyespot. Bugguide.net says that the color of the wing borders depends on geography—the first brood in the South is edged with brown or pink, while subsequent Southern broods and the single Northern brood have yellow edges, but this adult was photographed in Ozaukee County, WI. Go figure. 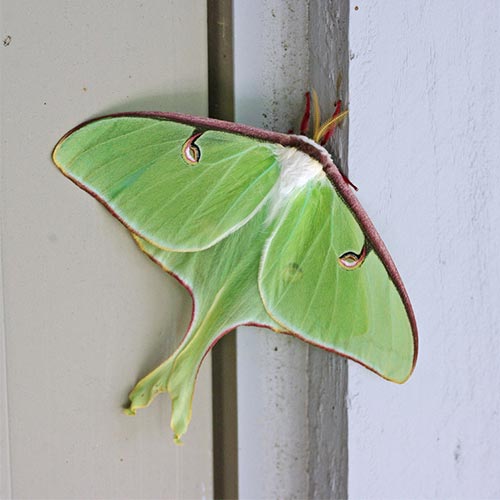 The bizarre reddish caterpillar in the netting is the normally-chartreuse caterpillar of the exquisite Luna Moth. It was captured halfway between the hickory tree whose leaves it probably nibbled (they like birch, alder, and sumac, too), and a thicket where it intended to pupate. Some caterpillars undergo a color change when they have finished eating and are about to pupate; this one had a death-grip on the netting and was minutes away from pupating. The cocoon is constructed in the leaves of the trees and is designed to fall into the leaf litter when the tree loses its leaves.

Caterpillars and cocoons, especially those of the Giant Silk moths, are dynamite tools for teaching kids about Nature, but the landlord (you) has certain responsibilities: