Quick-and-dirty review of recent BOTWs on galls: Galls are growths on plants that are reactions to the actions of another organism. In brief, a chemical produced by an immature insect, or by its Mama, causes a plant to grow a characteristically-shaped collection of tissue, called a gall, around the perpetrator. The gall-maker (usually an insect) is subsequently imprisoned inside of the gall, but the gall is full of good things to eat. Galls often contain more than just their gall-maker—spiders and other insects may peacefully co-exist (peaceful co-habiters are called inquilines), or may eat/parasitize the gall-maker, or may eat the gall-maker and take over its dwelling. For those of us who never get enough of galls, here are some “Odd-ball galls.”

Pine cones on willows? This gall forms only at the tips of willow shrubs and according to Stokes, in Nature in Winter, is more common in the Great Lakes area than in the East. It is caused by the larva of a tiny (about 0.2” long) gnat/midge, the lovely Rhabdophaga strobiloides (from the Greek strobilos—pinecone). Eggs are laid at the tips of new willow branches; the larvae hatch, begin to feed, and a gall forms. The larva can be found in the gall in winter—along with a cast of thousands. Frost, in Insect Life and Natural History, says that because the scales of the “pine cone” overlap only loosely, 31 potential residents besides the gall maker may inhabit a willow pine cone gall. Beetles, caterpillars, sawflies, cynipid wasps, midges, and the eggs of meadow grasshoppers have been found inside pine cone galls. In fact, Stokes reports on a study in which 23 pine cone galls were collected, and 564 insects were reared from them—but only 15 contained the original host gnat! 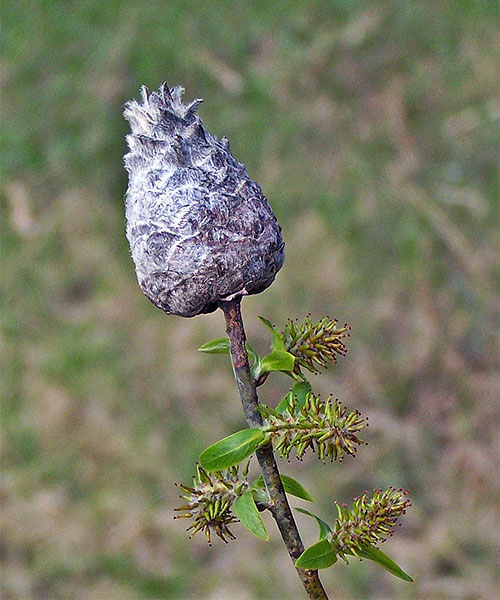 The spectacular crimson Maple Velvet Gall (aka “red felt”), found on leaves of sugar and silver maples, is made by a microscopic (1/100” long) mite in the genus Eriophyes. The same genus of mites is the cause of Spindle Galls and Bladder Galls and more. Mites are spider relatives that typically have 4 pairs of legs, but Eriophyid mites, adapted for the crowded conditions inside a gall, have an elongated body and only 2 pairs of legs. With no wings, and only half the normal quota of legs, Eriophyd mites get from Point A to Point B by using the inadvertent assistance of animals or by wind power—a sort of aerial plankton. They have been collected many hundreds of feet in the air. 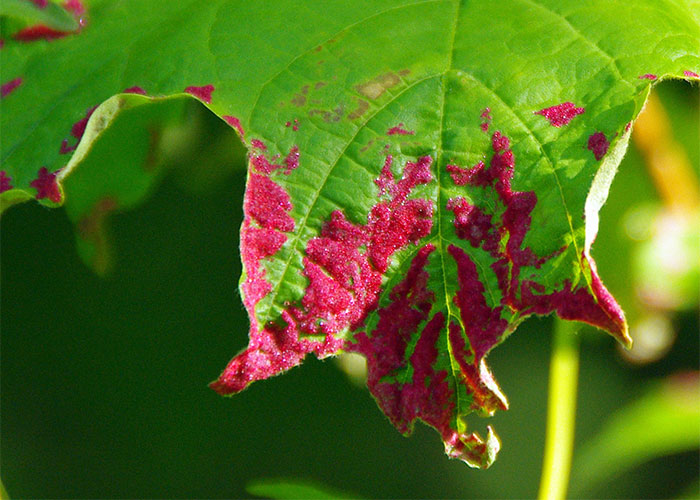 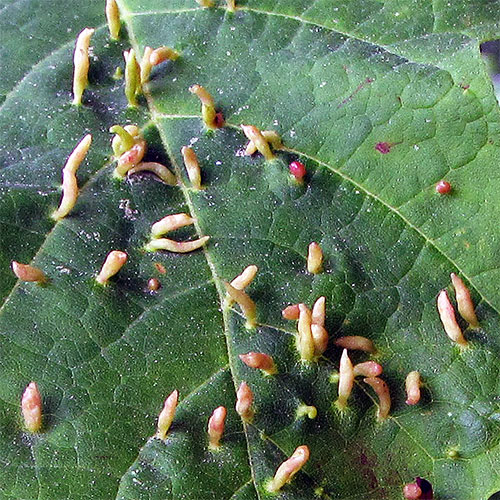 They have a complicated life cycle. The female overwinters, sheltered in bark crevices, kept alive by the “antifreeze” she circulates in her system. She emerges into the warm, spring air and crawls to the newly-emerging leaves to feed. Her feeding results in characteristic galls, but these galls retain an opening on the underside of the leaf. 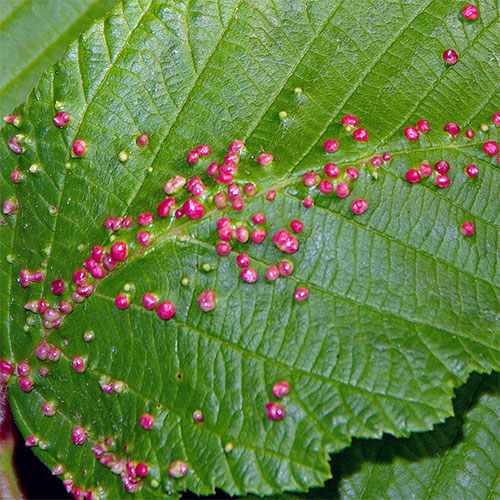 Eriophyid mites have expanded the functions of the gall; they feed and mate inside the gall and lay eggs there, and their offspring stay at home until they are ready to disperse as adults. From their natal gall, they move to other leaves to homestead.

Eriophyid mites again. Each ash tree has either male or female flowers, and the teeny mite only occupies the male flowers. It sneaks into the ash flower before the flower starts to bloom, and it induces a gall in the form of lots and lots of flowers. The female mite lays her eggs in the gall as it develops. Initially the gall is greenish and hidden by foliage, but by fall it turns into a brown and woody spray of petrified flowers that will stay on the tree for a few years. The gall itself doesn’t harm a tree, but the combined weight of all its galls may make a tree branch more likely to break. 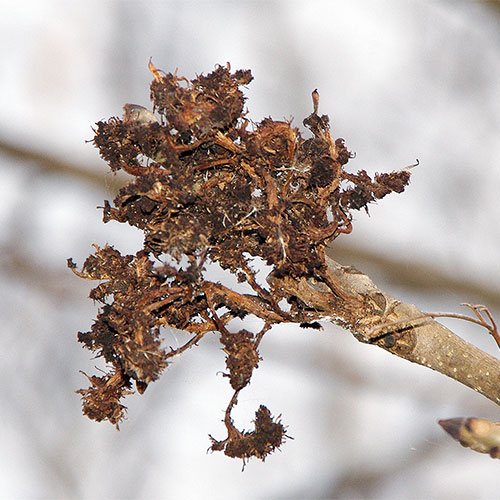 Witch hazel is a fascinating shrub that grows at woodland edges and blooms in fall. Its fruits take a year to mature, and its seeds are disbursed from the parent shrub explosively. The spiny witch hazel gall (SpWHG), causes a spiky ¾” oval growth on a stem. The SpWHG gallmaker is an aphid that divides its life cycle between witch hazel and river birch. The eggs are laid on witch hazel, and when it hatches, the aphid goes looking for a flower bud to invade. Its feeding causes the characteristic gall to form. The SpWHG aphids produce a second generation (an aphid generation is a short generation) that moves over to a birch, and there, things get too complex for these pages, with scale-like females, winged females, accessory females, and pseudogalls all making an appearance. 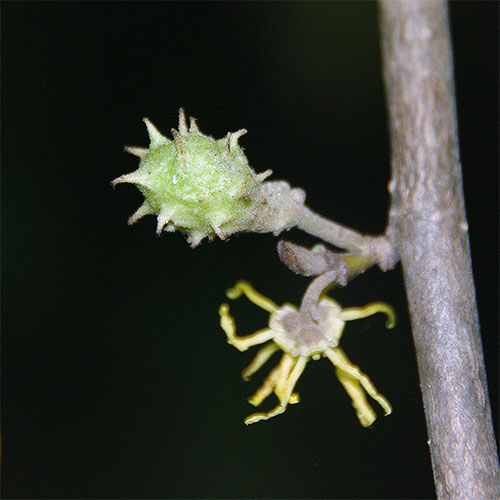 Cankers are galls that are caused by fungi, and even the BugLady can’t extend the definition of “bug” quite far enough to include fungi. But these galls are pretty prominent on the landscape. Stokes, in his great A Guide to Nature in Winter, explains that fungal spores land in wounds caused by broken branches, slashes, etc. The growing fungus primarily attacks the bark and cambial layers (the BugLady is confident that you can visualize those Anatomy-of-a-Tree charts that hung on the back wall of your high school science room). The bark may become roughened or deformed or killed and sloughed off. Trunks and branches are the common spots for cankers to form. 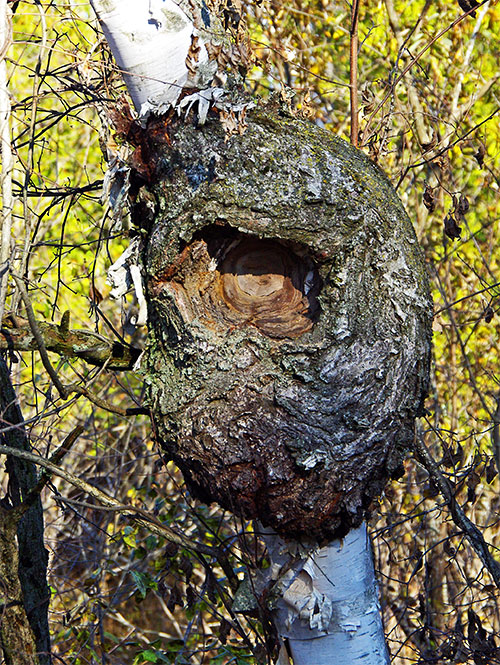 Black knot galls are free-form, lumpy, black galls caused by a fungus that affects cherry and plum trees. This gall is not a single-season phenomenon; the plant has this fungus for life, and a shortened life it may be. A corky swelling starts growing slowly on the twigs, branches or fruit in fall and continues more vigorously during the next growing season. Initially, the surface of the gall is greenish and “pulpy,” but later it turns dark and hardens. Black Knot galls may reach a foot in length, and the leaves and fruit beyond the gall may be compromised. After about two years of growth, the older galls start to die, but the original gall fungus continues to make inroads within the tree. The BugLady likes a gall for which the control measures include pruning shears and a chisel. 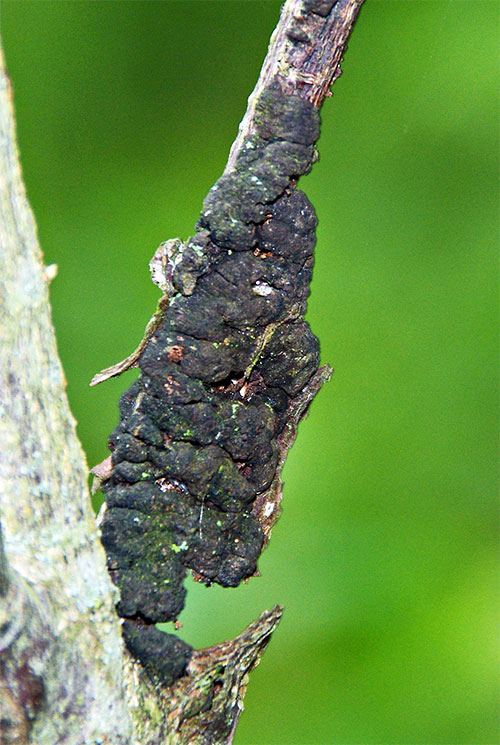