Autumn hikers often notice plants that bear strange shapes, especially on their stems and leaves. These lumps are galls—signs of the presence of insects that we seldom see.

Galls are defined as abnormal growths on plants (and animals). They can be caused by friction, as when two plants rub against each other for a long period of time, but they are also precipitated by a variety of biological agents including viruses, mites, nematodes, and fungi (which cause witch’s broom). The vast majority of galls in the U.S. are made by insects in just a few groups of flies (gall midge larvae), and wasps (1/3 of galls are caused by tiny Cynipid wasps). Gall-making insects “take over” control of the growth of certain portions of a plant. The higher up the taxonomic ladder a plant is, the more kinds of galls it may host. Lawlor, in Discovering Nature Close to Home, states that North American plants support more than 2,000 kinds of galls—800 different kinds form on oaks alone, about 125 kinds on roses, and more than 50 kinds on goldenrods (genus Solidago). 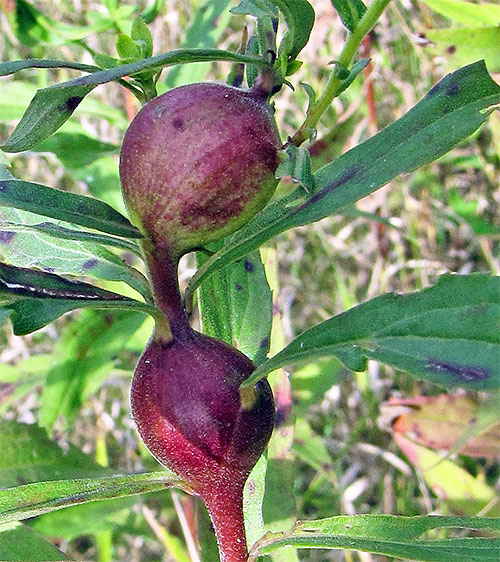 In general, galls result from the stimulation of the plant by a very small, usually immature, invertebrate that’s inside it. The female gall-maker lays her egg on/in the plant. Eggs laid in fall overwinter as eggs, hatching in spring and setting about the business of taking over a plant part. Spring eggs are laid in/on the young, growing sections of a plant. The egg hatches, and if it’s not already inside the plant, the larva/nymph wastes no time chewing its way in. 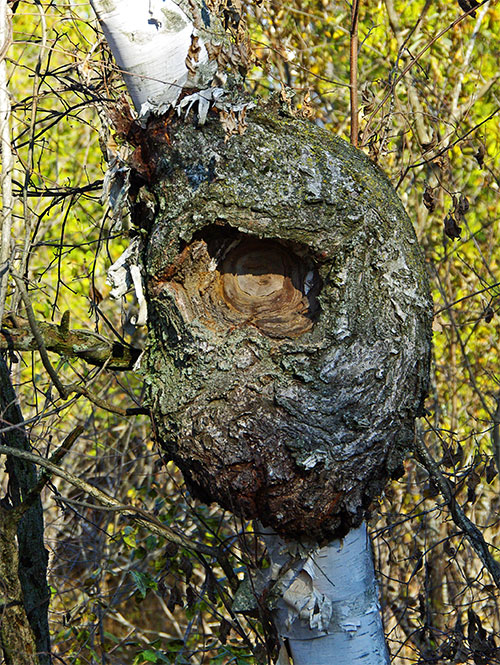 References differ slightly over what happens next, and the mechanism may not be the same across the board. Sources agree that the larva sets out to do what larvae do—eat. While rummaging around in the plant tissue, a larva may exude a substance that mimics a plant growth chemical called an auxin (though in some cases the chemical may be introduced by the female when she pierces the plant during egg-laying). The plant responds and grows more/bigger cells at that spot (The Auxin Connection was confirmed when, in 1881, researchers ground up the teeny bodies of gall makers, injected them into appropriate plant parts, and produced—Eureka!—galls!). The inner lining of a gall provides a protein-rich food, and according to Lawlor, a developing larva can also secrete an enzyme that converts plant starch into energy-rich sugar. Sugars are plant foods as well as animal foods; plant foods cause extra tissue to be produced; and extra tissue is called a gall. The advantage to the plant is in confining an internal/infernal herbivore that is gnawing on it.

The Who, What and Where are the easy part. When, How, and Why take a little explaining.

The process is anything but random. Gall-makers tend to be “picky” eaters that are attracted to one species or group of plants. The results of their intrusions are galls of predictable size, shape and color growing in a predictable spot on a plant. Galls are sometimes unsightly and always fascinating, but they generally don’t harm the plant or its seed-making ability.

According to Frost in Insect Life and Natural History, many gall insects spend both their larval and their pupal stages inside their gall. They are adapted for small spaces, having elongated bodies and reduced antennae and legs. They are hidden from predators, sheltered from weather, and assured of a steady food supply, and yet the lives of gall-makers are neither safe nor solitary. Predators large (woodpeckers and bait-seeking ice fishermen) and small (mites, beetles, etc) search for occupied galls. Small invertebrates eat or lay eggs on the gall-maker, or simply co-habit, or eat the gall-maker and then take over the gall. Harmless co-habitants are called inquilines (from the Latin inquilinus for “tenant” or “lodger”). Those that kill the gall-maker are classed as parasites. Lawlor tells of small birds that move into baseball-sized galls (but she doesn’t tell where) and says that gall insects “contribute” an enormous amount of protein to bats, birds, squirrels, chipmunks, etc.

What a dynamite story behind this common gall! Ms. Eurosta solidaginis (Goldenrod Fly), about ¼” long with patterned wings, lays her eggs on emerging Canada goldenrod stems in early summer. Her larva/maggot produces a gall in the manner described above, eventually overwinters within it as a larva, and re-activates in the warm weather of spring. Flies practice complete metamorphosis, which means that they go through a resting/changing pupal stage. The resulting adult not only looks different, it frequently eats different. In the drastic changes that occur between a fly’s larva-hood and adult-hood, the larva’s chewing mouthparts are exchanged for the standard “vacuum-cleaner” mouthparts of the adult fly. 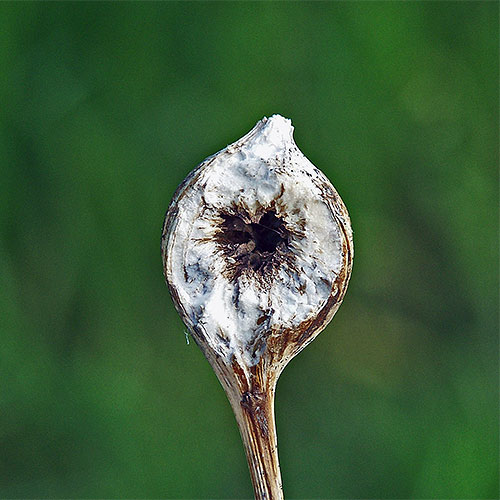 In spring, in anticipation of those vacuum-cleaner mouthparts, the larva chews a tunnel from the center, through the dense plant tissue of the gall, all the way to its dry, outer “skin.” Then it retreats to the center again to pupate. The newly-emerged adult comes equipped with a small, inflatable sac on the top of its head. By pumping the sac full of liquid, the fly can pop a circular hole, first in the pupal case, and then through the dry skin at the edge of the tunnel. According to Lawlor, gall “exit doors” may face north more often than south because the north side gets less sunlight and therefore is moister and softer.

The Solidago gall-moth (with the glorious name of Gnorimoschema gallaesolidaginis) is one of the few moths that causes galls. According to Stokes in his wonderful Nature in Winter, her eggs are laid in fall on lower leaves and stems of goldenrod and the eggs overwinter in a “pre-hatching” stage. The larva hatches in spring, crawls toward new goldenrod shoots, burrows into the end buds and keeps going a few inches down into the stem. There, it stops to feed and a gall forms. In late July, it makes its exit tunnel in upper end of gall, plugs the hole with plant material and silk, and pupates. It emerges as adult in late August or early September, so the gall does not contain its maker in winter. But this moth has many parasites, and if you open an elliptical gall in late fall or early winter, you may find evidence of an ichneumon wasp. Many spiders, bees, ants, thrips and beetles recycle old elliptical galls as shelters or deposit their eggs in them. 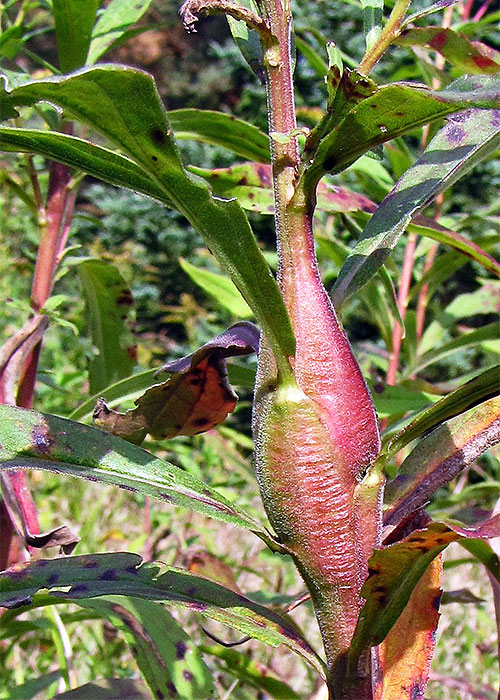 This gall, which has been described as looking like a dried flower arrangement, is formed by the Goldenrod Gall Midge (Rhopalomyia [or Cecidomyia] solidaginis) (seeing a pattern, here?). Some authors say that it, also, is confined to Canada goldenrod; others say to look for it on Tall/Late Goldenrod. The midge lays her eggs on (usually) the topmost leaf bud. As a result of the actions of the gall-maker, the stem stops growing, but the leaves don’t, and the midge larva is soon surrounded by a tight cluster of whorled vegetation (many bunch galls are much denser than the illustration). Stokes says that although one midge is responsible for the gall, spiders, the grubs of other midge species, along with assorted other invertebrates may board there. The Goldenrod Gall Midge (GGM) has two claims to fame. First, she is the only insect that creates a bunch gall, and second, during her lifetime an individual GGM is wired to lay only male or only female eggs in any one sitting. 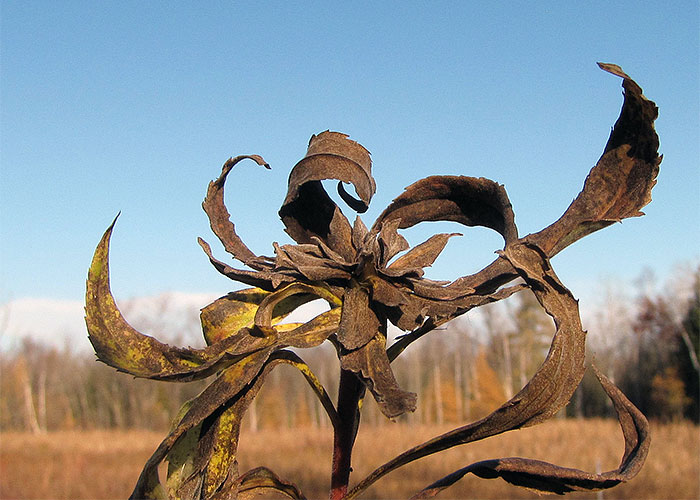 FYI, BugFans, this is the 100th original entry in the BOTW series, and there have been an additional 10 “retreads” of the earliest episodes. They are being archived at the UWM Field Station and the Riveredge Nature Center websites; remember—the BugLady owns the typos.

Galls II – A Date with History