The protocol for BOTW episodes has always been “Start with a usable picture.” Well… The solitary wasp that created egg chambers in the BugLady’s wind chimes was having none of that.

She’s a Four-toothed mason wasp (Monobia quadridens). She belongs in the family Vespidae, along with a whole bunch of solitary species (she is solitary) and some notable social species like the yellowjackets, hornets, and paper wasps (the BugLady is often asked which insects are most likely to cause us grief, and she always answers “insects that live in colonies and have homes to defend and multiple workers to sacrifice.”). The Four-toothed mason wasp is in the Potter/Mason wasp subfamily Eumeninae. 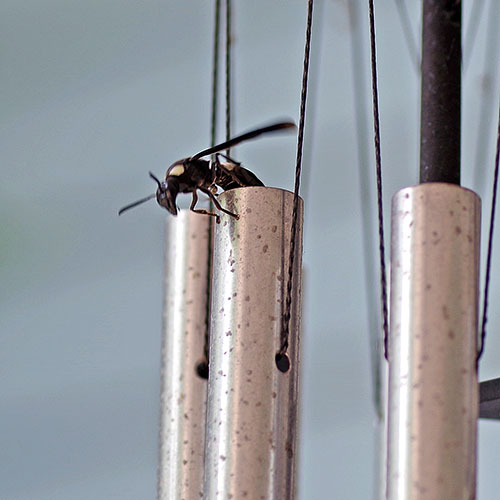 Monobia quadridens is found throughout eastern North America, edging into southern Ontario to the north, the Great Plains on the west, and northern Mexico to the south. Monobia is a small genus of seven Neotropical species—three in the U.S. (two of those, just barely). Here’s one of the others—Wow!

This is a medium-sized wasp, with both a length and a wingspan of just under an inch; males are a bit smaller and have a white spot on their face. Some of the books say it resembles a bald-faced hornet, and that’s what the BugLady thought it was until she saw it climbing down into a pipe on the wind chimes, a distinctly non-bald-faced hornet behavior. Here’s a better picture of the female, and one of the male.

After a 30 minute liaison with a male (rather lengthy for a wasp), the female four-toothed mason wasp starts to build egg chambers for her eggs. She will tunnel into dirt or wood; or she will use pre-owned dirt, mud, or wood nests made by a variety of bees and other wasps; and she is also known to usurp active nests of other species, entering them and exterminating any eggs, larvae, pupae, or cocoons within.

She lays an egg at the far end of the tunnel, and then she hunts, stings, and paralyzes caterpillars for provisions until she is satisfied that the larder is full. She seals the chamber with not one, but two mud walls with an air pocket between (intercalary cells). Repeat until filled.

The eggs hatch in a few days and larvae feed on their cache of caterpillars for about a week before pupating. Male four-toothed mason wasp have a shorter “gestation period” than their sisters, but Ms. Wasp has that covered—she can selectively lay male or female eggs, so she places the males closer to the entrance, where they can exit without disturbing the females.

It has been postulated that the hollow spaces between cells will fool parasites and also that they provide insulation, but in a paper called “The Cocooning Habit of the Wasp Monobia quadridens” published in 1919 in the Journal of the Brooklyn Entomological Society, author Phil Rau noted that whether meant as insulation or as parasite protection, the double walls of the egg chambers are inefficient (larval mortality due to freezing is high). Monobia quadridens overwinters as a “naked” larva rather than spinning a protective cocoon, and Rau considers whether the presence of some silk strands on the inner walls of the chamber is evidence of vestigial web-spinning behavior. In mulling over whether the building of mini wall-covers harks back to an ancestor that spun a cocoon, Rau postulates that “a more logical explanation of the phenomenon is that it is of physiological necessity to the organism to have the body cleared of this material before transforming.”

Larval four-toothed mason wasps may be carnivores, but their parents are vegans, found on flowers, sipping nectar, accidental pollinators. The caterpillars that are collected by Mom and consumed by the larvae are micromoths from a variety of families.

Four-toothed mason wasps appeared in one of the first insect field guides in this county, a small volume by Frank Lutz called Field Book of Insects, published in 1919. It’s in a color plate labeled “Insects to be Handled with Caution.” Why? The venomous sting of the female is comparable to that of a bald-faced hornet (in other words, you’ll know you’ve been stung). Fairly unique among wasps, the male Monobia quadridens will use his pointy (but stinger-free) abdomen to defend himself (although he lacks venom), delivering a jab that Rau describes as a pin prick.

In the southern part of their range, four-toothed mason wasps have two generations a year (bivoltine); the BugLady isn’t sure if they have two here in Wisconsin or one (univoltine). The wind chimes will have to overwinter outside this year, and the “Ode to Joy” will sound a bit flat for the foreseeable future.