Four Bluets and a Dancer – and a Forktail (Family Coenagrionidae)

The BugLady enjoys chasing damselflies, despite the contortions she sometimes assumes while photographing them. As it happens, taking the picture can be the easy part of the deal. It’s ID-ing them that can be tricky—the damsels themselves don’t need a hand lens to recognize each other, but the rest of us sometimes do. This selection of damselflies in the Pond Damsel family Coenagrionidae—four bluets, a dancer, and a forktail—have in common that, here in Wisconsin at least, the males are described as “unmistakable.” For the females of the species, BugFans are on their own (some great information about dragons and damsels is at the Wisconsin Odonata Survey). 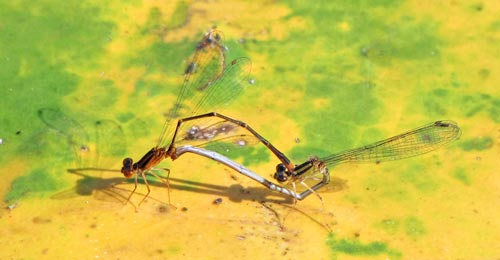 With small adjustments, their biographies are similar. As aquatic immatures (naiads), they eat any invertebrate that they can snag from the surrounding waters. As adults, they feed on small, soft-bodied insects that they spot from their perches—the barbs on their legs help them to secure their prey. They range from a mini ¾” to about 1 1/3”. Females of most of these species oviposit in tandem (with the male still clasping her behind her head), and while laying eggs, she may reach below the surface with her abdomen or may totally submerge for as long as twenty minutes (he may or may not go with her). Eggs are laid on/in emergent, floating-leaved and/or submerged aquatic vegetation. The eggs hatch and the young feed, and they overwinter as late-stage naiads, transforming into adults late in the following spring. Adults have flight periods that span the summer.

Most of the 17 species of bluets in Wisconsin have a black-and-blue striped thorax and a black-and-blue abdomen. Bluets are informally divided into the “blue bluets” like the Double-striped bluet, whose predominantly blue abdomens are decorated by black stripes/rings, and the “black bluets,” whose black abdomens have blue rings/stripes.

The less-than-an-inch Double-Striped Bluet (Enallagma basidens) gets its name from the black shoulder stripe that is divided by a thin blue line (look closely). Originally found in the Southwest, DSBs have been expanding their range to the north and east, and they are now found all the way to New England, nicking the southeastern edge of Wisconsin (where they are a “Most Wanted” species among damselfly aficionados ). Look for them flying and hovering over fairly open ponds or very slow streams. 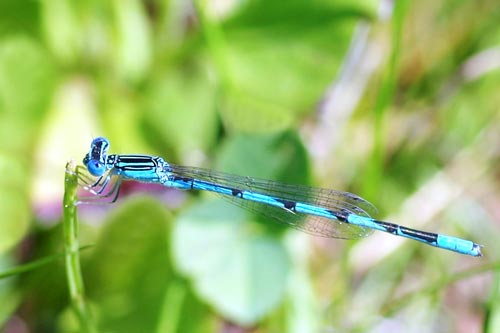 Unlike the DSB, the oxymoronic Orange Bluet (Enallagma signatum) is common from the Great Plains through the eastern U.S. and into Canada, around still waters with water lilies (into which they oviposit). These slim, orange-eyed damsels are about 1 1/3 inch long. Like the Vesper Bluet below, OBs become active in mid-to-late afternoon, which means that they may be missed during Odonate surveys carried out in the early part of the day. OBs fly slowly through shoreline vegetation and perch horizontally or aslant on the ground, on water lilies and emergent vegetation, and even in trees. 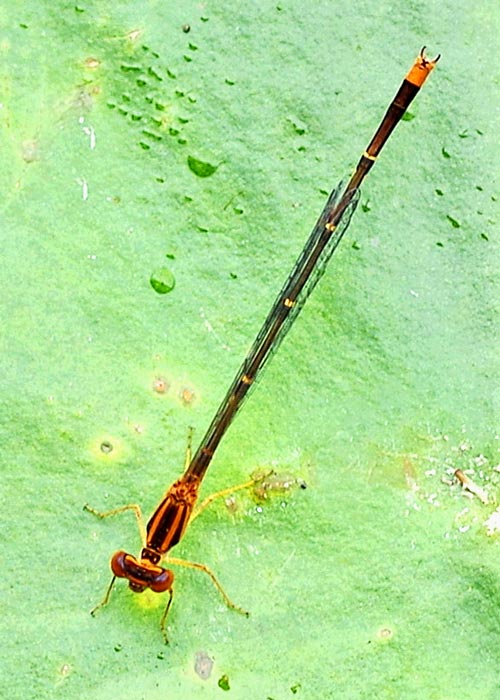 The elegant Rainbow Bluet (Enallagma antennatum), with its coat of many colors, likes quiet waters surrounded by vegetation, more in the northern half of North America than the south. RBs were the subject of a study published in 2012, in which Mortensen and Richardson tried to measure how the presence of predators and/or evidence of predation affected foraging by RB naiads (and, therefore, their growth rates). It seems that the naiads can pick up chemical cues both from the predators and from their injured prey. The “scent” of discarded prey body parts in the water appeared not to hinder naiads from foraging, but cues from actively feeding predators did motivate naiads to reduce foraging. 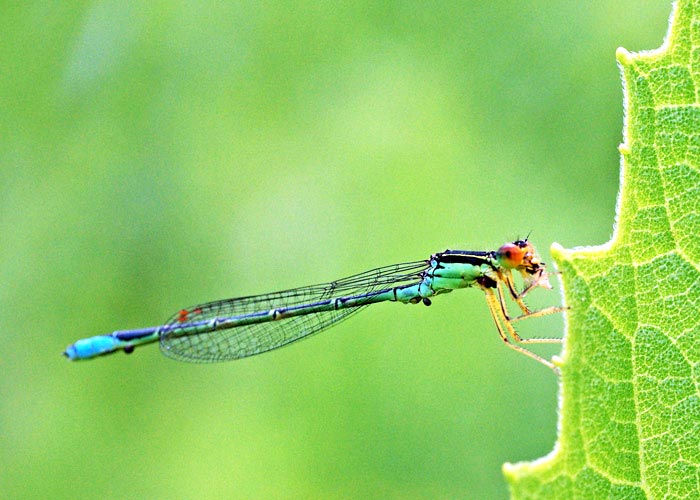 The BugLady has fun stalking the beautiful Vesper Bluet (Enallagma vesperum). The VB, true to its name, flies, mates, and oviposits (in water lily stems and Potamogeton leaves) from late afternoon until well after sunset. The 1 ½” VB likes quiet waters with aquatic plants and with woods nearby and is found from the Great Plains, east. 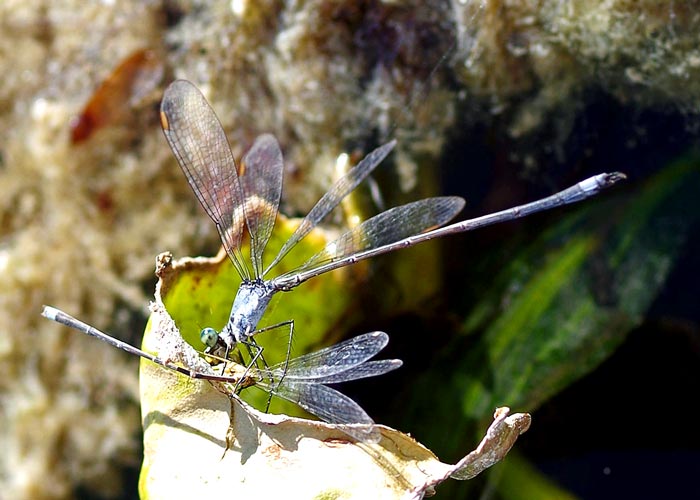 VBs fly low over the water, and males are territorial, perching on the patch of floating vegetation they want to protect. They rise up and confront intruding males in the air, and intense fighting may ensue. VBs are never far from water and may also sit on shoreline vegetation, including trees. 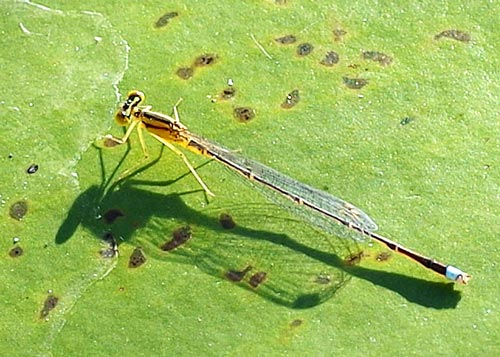 Late one afternoon, when the BugLady was on a pier growing her collection of slightly out-of-focus VB shots (they insist on perching between the camera and the sun), a Spreadwing damselfly (Lestes sp.) swooped by, snatched a VB out of the air, and proceeded to eat it.

The amazing Variable Dancer (Argia fumipennis, smoky-winged) is common throughout the East and into the western U.S., and three subspecies are recognized within its range. The clear-winged Wisconsin representative (Argia fumipennis violacea), sometimes called the Violet Dancer, is the most common; the two southern subspecies (the Black dancer and the Smokey-winged dancer) have dark wings. Variable Dancers like ponds, lakes and slow streams with plenty of plant life. When they are not courting, these 1 ¼” beauties may stray far from water. They often open and close their wings while perched. 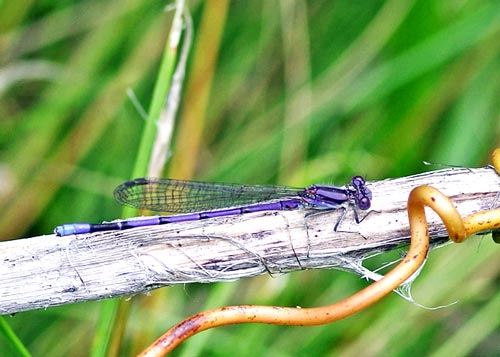 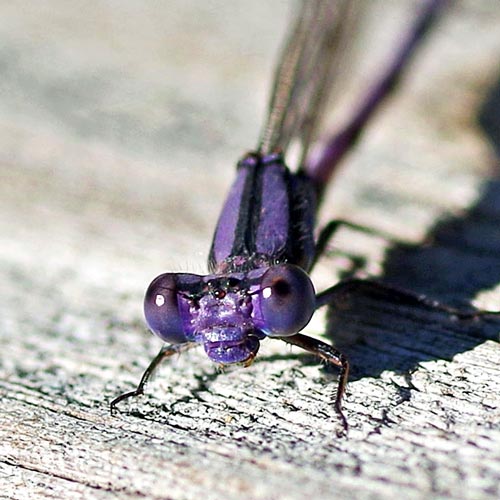 With a dark thorax and a yellow abdomen, the Citrine Forktail (Ishnura hastata) is the color opposite of the Vesper Bluet. Stigmas are the pigmented spots near the tips of dragonfly and damselfly wings, and the male CF is the only damselfly whose forewing stigmas (straw-colored, in his case) aren’t located directly on the wing’s edge. Resources term this damselfly “tiny,” although to the BugLady, its thick abdomen made it look “heftier” than the slender Eastern Forktails that shared the shoreline. CFs like wetlands crowded with sedges, grasses and rushes. 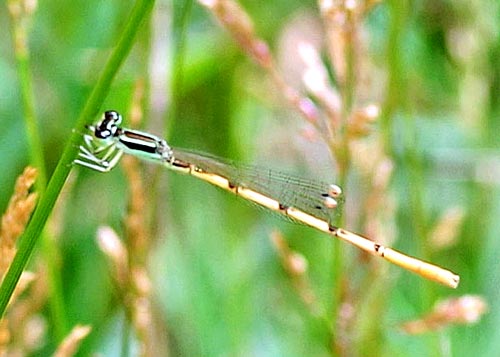 Its fragility is misleading—this damselfly gets around! Like the Double-striped bluet, it is extending its range to the northeast (it’s another “Most Wanted” species). There is speculation that CFs may colonize northern areas seasonally (Large milkweed bugs and Spotted cucumber beetles travel north with the spring, too, as do some dragonflies and butterflies). Along with populations from Venezuela to New England, it has made its way to offshore islands (CFs have found their way to the Azores, which lie in the Atlantic Ocean some 930 miles west of Portugal).

CFs depart from the reproductive script just a bit, too. Females mate just once and then use those sperm for all of their egg-laying, and they oviposit alone. The population of CFs in the Azores reproduces by parthenogenesis—females, without benefit of males, lay eggs that hatch into more females—and CFs are the only Odonate known to do that.