The BugLady is thankful for damselflies. Oh, not always for the identification part, but for the joy of seeing them flickering through their thickety habitats and for the thrill of the photographic chase (first you have to spot them, and then the light and the background are often terrible). She wrote about the rare-in-Wisconsin Citrine Forktail a few years ago, and this summer she found uncommon Fragile Forktails at one of her haunts. 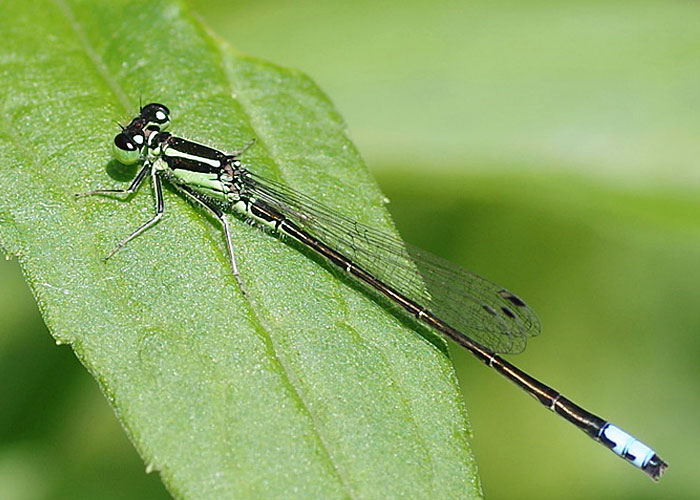 The Wisconsin Odonata Survey tells us that “The name “forktail” comes from tiny projections off the tip of males’ abdomens, which help to identify the species”, check bugguide. This feature isn’t obvious in the field, and so BugLady sometimes flips through her mental Rolodex of bluets before thinking of forktails.

Forktails are in the genus Ischnura, in the Narrow-winged damselfly family Coenagrionidae, a family that encompasses the majority of our damselflies. There are 65 species listed in the genus, with 20 in the New World and the rest in the Old. Forktails are among our smallest damselflies, hovering at around an inch. Along with the forked tail, males (generally) have a black and green/blue striped thorax and a blue-tipped abdomen. In both sexes, the upper halves of the eyes are much darker than the lower, and like bluets, forktails have “eyespots” – pigmented areas on the backs of their eyes. Females of many species are polymorphic, often starting life in shades of orange (looking a bit like an Orange Bluet, only sturdier) and turning slate blue as they age, which allows males to recognize them as mature (the color change is due to pruinescence – little waxy flakes). Rarely, females have male coloration. 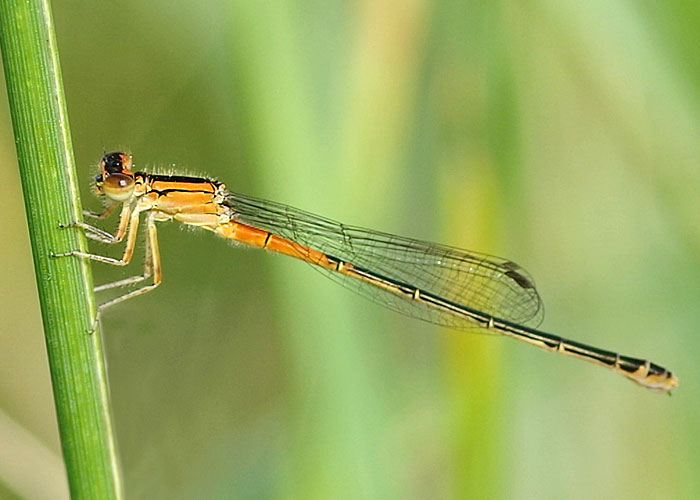 With a few spectacular exceptions (like the Citrine Forktail), forktails tend to be weak-ish flyers that hang around the edges of their ponds from the time they emerge as adults (in many Odonate species, the females absent themselves from the shore until they are ready to reproduce). They prefer quiet waters with lots of aquatic vegetation, into which the females insert eggs, one at a time and unguarded, and in the shelter of which the aquatic naiads lurk and hunt. Dennis Paulson, in Dragonflies and Damselflies of the East, writes that female forktails can probably get away with ovipositing unguarded “because the sexes are at the water together, and females have effective ways of discouraging male attention, so male contact guarding is unnecessary.” The Odonata Central website expands on that a bit, saying that “the well-documented behavior of Eastern Forktail females flexing the abdomen ventrally and rapidly beating their wings was determined to be a successful threat display, warding off intruders.”

Many forktails have a long flight period; today’s two species are around from late spring, through the summer, and into early fall (several generations, not the same individuals). 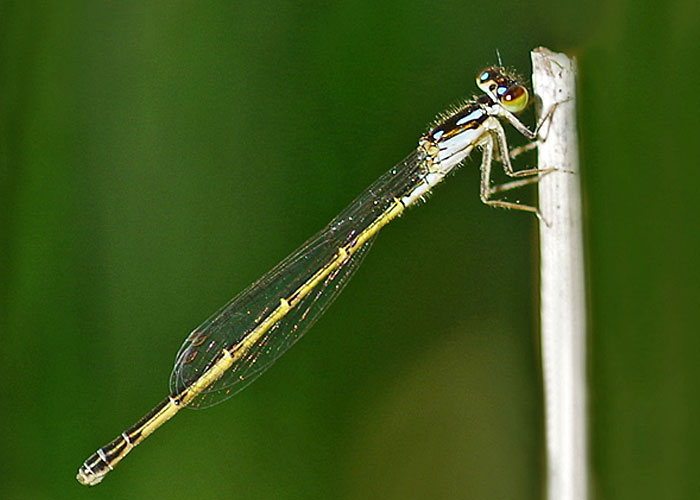 FRAGILE FORKTAILS (Ischnura posita) are a species that Ed Lam (Damselflies of the Northeast) calls “field identifiable” (if you make sure that you look twice – more about that later). The colored stripe on the black thorax of both males and females is broken, shaped like an exclamation point (Bob DuBois, in the BugLady’s ragged copy of Damselflies of the North Woods, says that “posita” means “positive” and alludes to that exclamation point), and the last few abdominal segments lack a blue tip. Older females can be tough to tell from their Eastern Forktail counterparts, check images of Ischnura posita and Eastern Forktail. 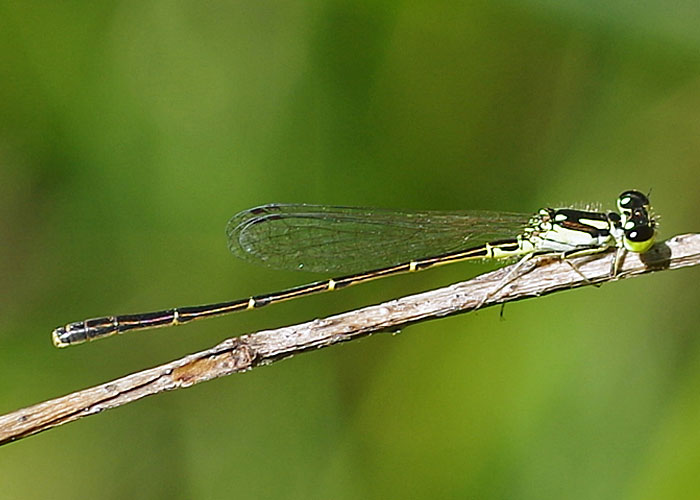 Fragile Forktails are pretty common in eastern North America, but they’ve been recorded in only about a dozen Wisconsin counties, mostly in the southeastern and southwestern corners of the state (with an outlier near Lake Superior). Although their range is listed as permanent and ephemeral waters from Newfound to Florida to the Dakotas to Texas to Guatemala, they’re a State Special Concern damselfly in Wisconsin and are even less common west of here. Bob DuBois calls them “one of our most shade-tolerant damselflies.”

[Note: They were introduced to the Hawaiian Islands in 1936 (the BugLady couldn’t discover why) and are well-established there, one of seven species of odonates that, along with countless other exotic plants and animals, have been carried to that great Petri dish in the Pacific. A note from the Bishop Museum says that they are more able than native damselfly naiads to withstand predation by introduced fish species.] 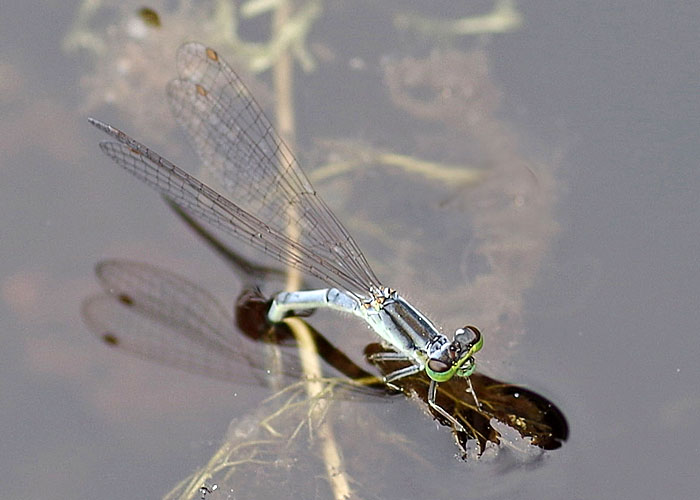 Females oviposit in aquatic vegetation, and the naiads are said to be pretty feisty, chasing other naiads off their underwater turf. It’s suspected that they overwinter as naiads, ready to emerge when the water warms in spring. Here are two of BugFan Linda’s videos of Fragile Forktail naiads: Fragile Forktail Damselfly emerging from her larval shell in real time, and A Tale of Two Damselflies Transitioning to Adulthood. Way Beyond Awesome, Linda!!! Here are links to her whole : Nature in Motion series, and to her playlist of Odonates. She’s been busy. 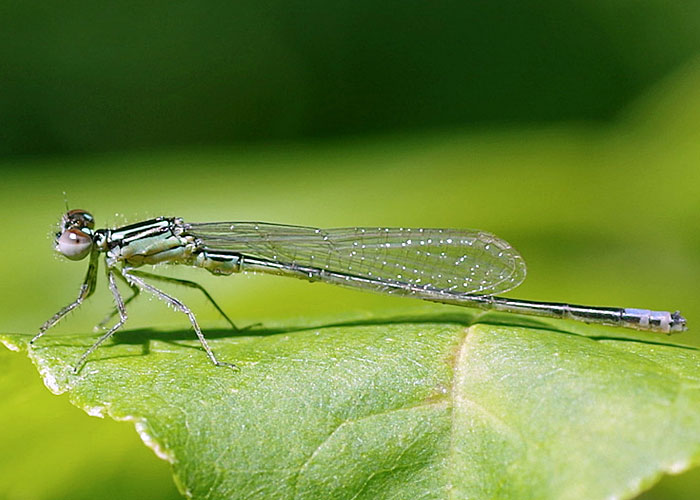 Fragile Forktails, especially the females, are among the damselflies that eat other damselflies, including those of their own species, check this image, and this video – not for the faint of heart . They will grab small flying or perched insects and have even been known to rob spider webs. 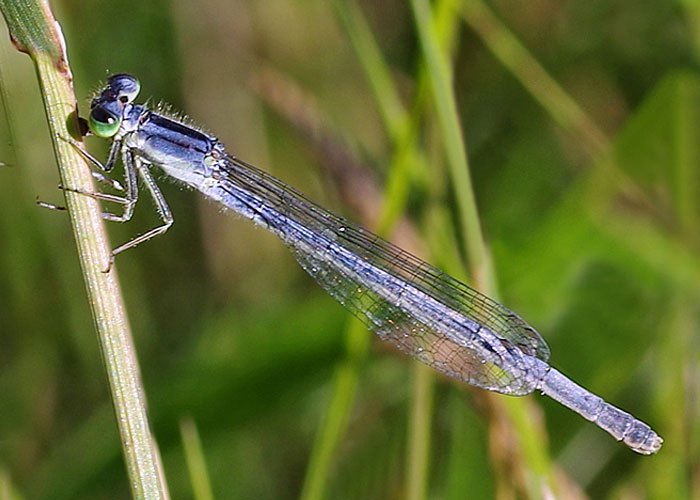 EASTERN FORKTAILS (Ischnura verticalis) are found from the Great Plains east across southern Canada to the Atlantic, except for the Deep South. The Odonata Central site calls them one of the most common damselflies in their range, and they’re one of the earliest and latest damselflies on the Wisconsin landscape. It has been suggested that they are, to some degree, dispersed by wind. Lam considers them “field identifiable,” too.

They’re a hair larger than the Fragile Forktail, and males share a similar black and green thorax, but in the Eastern Forktail, the green thoracic stripe is not broken – except when it is. Rarely, Eastern Forktails carry an exclamation point like a Fragile Forktails (look closely at today’s pictures), but the last two segments of the male Eastern Forktail’s abdomen are powder blue on top and bottom, joined by strap-like blue rings (that’s the “look twice” part) check the image on bugguide.net. Like other forktails, females are polymorphic, and a few have male coloration. 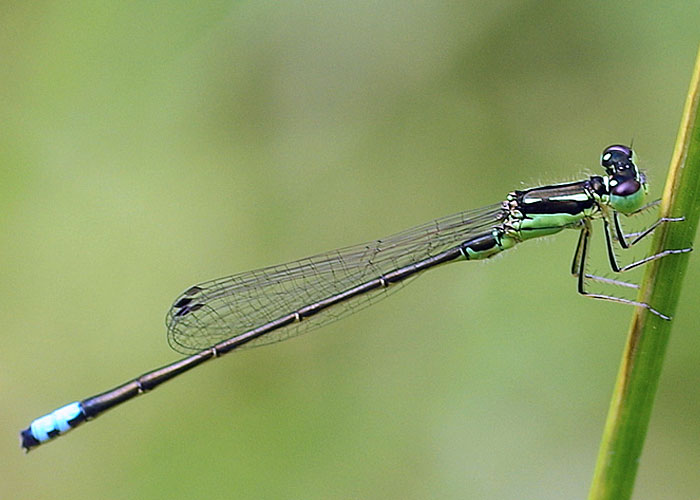 Eastern Forktails are found in similar habitats to Fragile Forktails (and indeed, the BugLady photographed them practically side-by-side). Unusual in damselflies, the females only mate with a single male (the Citrine Forktail’s reproduction defines “unusual”). Females oviposit in submerged vegetation, and studies have shown that good nutrition during egg-laying is vital to the health of her eggs. Like the Fragile Forktail, she will prey on other damsels. See the photo of a female eating a male. Naiads of late-season generations overwinter under the ice. 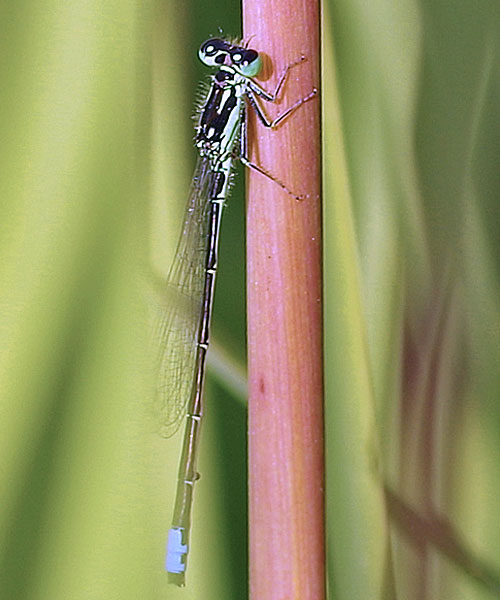 Like the Fragile Forktail, the Eastern Forktail spends its days flying around and perching close to the ground, but both species roost at night in vegetation that’s higher off the ground.

Want to take a deep dive into damselflies? Try this amazing (and downloadable) field guide.

A Honey of a Bee