For years, the BugLady mis-identified this leggy, inch-long beetle as a Bombardier beetle, but having finally managed a decent photo of one, she was able to identify it as a False Bombardier beetle (Galerita (certainly) janus (probably)). BugFans who look up a picture of the real McCoy will understand the confusion. Both are in the Ground beetle family (Carabidae), a group of (mostly) dark-colored, speedy, long-lived, nocturnal carnivores. Their elytra (the two hardened front wings that provide protection for the flying wings folded beneath) are often shiny and pitted or grooved. Many of the more talented members of the family produce quite a variety of noxious chemicals to spray on their enemies.

The (true) Bombardier beetle (BB), not pictured here, is a chemical marvel. According to Eaton and Kaufman in their Field Guide to Insects of North America, the BB can squirt nasty stuff (which discourages some predators and can stain people’s skin) in rapid-fire bursts or pulses (it’s the only insect known to have a pulse-jet) accompanied (like fireworks) by an audible “pop” and a visual “puff.” As a bonus the stuff has a temperature of 100 degrees! Centigrade! A pretty good trick for a cold-blooded critter. 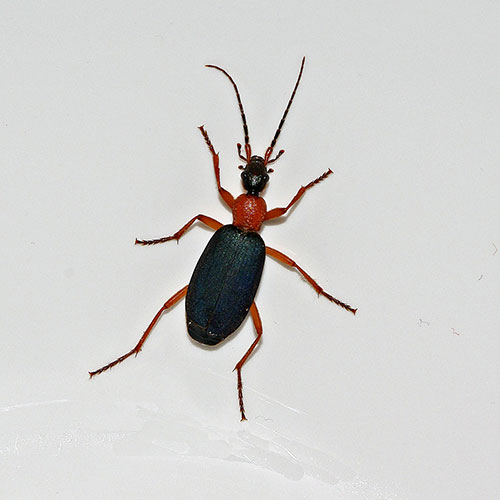 This volatile load is not carried around “as is”, it is assembled on demand. The very flexible trailing end of its abdomen houses, along with the usual insect paraphernalia, two large glands (one left, one right), each with its own “exhaust pipe.” Each gland is divided into two sequential chambers separated by a valve. The larger, end chamber contains hydroquinones and hydrogen peroxide (HQs and HP), and the smaller or reactor chamber holds oxidative enzymes (OE). Both inorganic and organic chemistry were a mystery to the BugLady but not, apparently, to the BB. When threatened, the BB presumably squeezes some HQ’s and HP into the OE in the reactor chamber, where the chemicals mix and produce a thermodynamic reaction&mdashsmoke, mirrors, liquid and heat—that can be precisely aimed. Waldbauer, in his The Handy Bug Answer Book, claims that drop for drop, the chemical is more potent than skunk spray, and says that a toad that is sprayed in the mouth gags, sticks out its tongue and rubs it against the ground. The hot spray from a large BB is also painful to humans.

The False Bombardier Beetle (Galerita sp.) (FBB) (pictured) has dialed it back just a bit. Its spray consists mainly of concentrated formic acid, with some acetic acid and wetting agents thrown in. Formic acid smells bad and is noxious to vertebrate and invertebrate pursuers alike. Paired abdominal glands are also standard equipment in the FBB, but they only consist of a storage chamber and a delivery chamber. Scientists who experimented on the FBB by pinching various legs and antennae report that the beetles spray accurately toward the side and the appendage that is being pinched, and that a left-side pinch activates only the left-side apparatus, and vice versa. Bursts of spray are only milliseconds long; it takes about 6 sprays to empty an FBB and almost 5 weeks to completely recharge.

This beautiful FBB is about twice the size of the “real” BB. It’s found in open woods and brush piles (and the BugLady’s basement and bathtub), where it often preys on caterpillars (but not in the BugLady’s bathtub).

Folks sometimes ask the BugLady how she gets some of her photos. Trade Secret #1 is that insects, being both cold-blooded and quick, are slowed down a bit by a brief sojourn in the refrigerator (a longer stay, alas, accidentally kills them). Her mashed potato serving bowl made a perfect backdrop for this beetle.